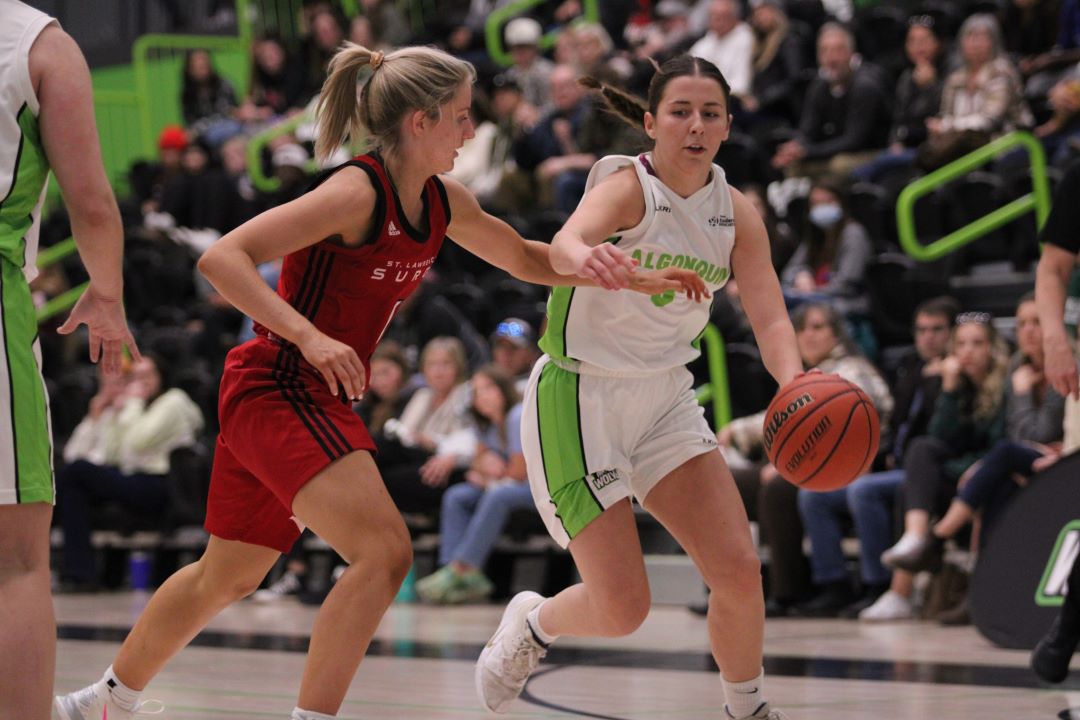 Leah Hirst (right) defends the ball as the Wolves close out their opening game of the season. Photo credit: Kolbe Devaux

The Algonquin Wolves women’s basketball team opened its season with a win on Friday night, defeating the St. Lawrence Surge 73-48 in front of an engaged home crowd.

The hosts scored 12 straight points to end the first quarter, 17-7 and went into halftime leading 40- 20.

Head coach Jaime McLean was pleased with his team’s offensive effort in their season opener.

“Offensively we were playing well,” he said. “We were running through things and we stayed within ourselves which created points for us which was great. During the preseason when we broke out of what we do we were turning the ball over because we didn’t know where our teammates were. Today we played within our systems and we knew where to find teammates.”

Forward Libby Hirst, who scored 10 points in the game, agreed with her head coach’s thoughts on the team’s offense.

In the second half, the Wolves continued to score, opening up a 28-point lead early in the third quarter, and never led by less than 19 through the rest of the game.

However, both player and coach were critical of the team’s defensive performance.

“It feels good to win but one of our coaches said it. We only won that game because the other team couldn’t score very well. We weren’t playing together on defense. Our communication wasn’t very good. Our help rotations and our rebounding all need improvement for tomorrow,” said Hirst.

“There’s a lot of good in terms of the overall result,” he said. “Defensively though there’s two things we need to work on. Number one is communication. We’re not communicating properly.”

The head coach was very grateful to play in front of a home crowd.

“Honestly to have energy on Day 1 is amazing, I really hope we get more people out now they’ve got the first experience and people seeing what we can do and what we’ve got. I really hope they enjoyed today,” said McLean.

The Wolves next play the Seneca Sting on Nov. 5, at 4 p.m. at the Jack Doyle Athletics and Recreation Centre.