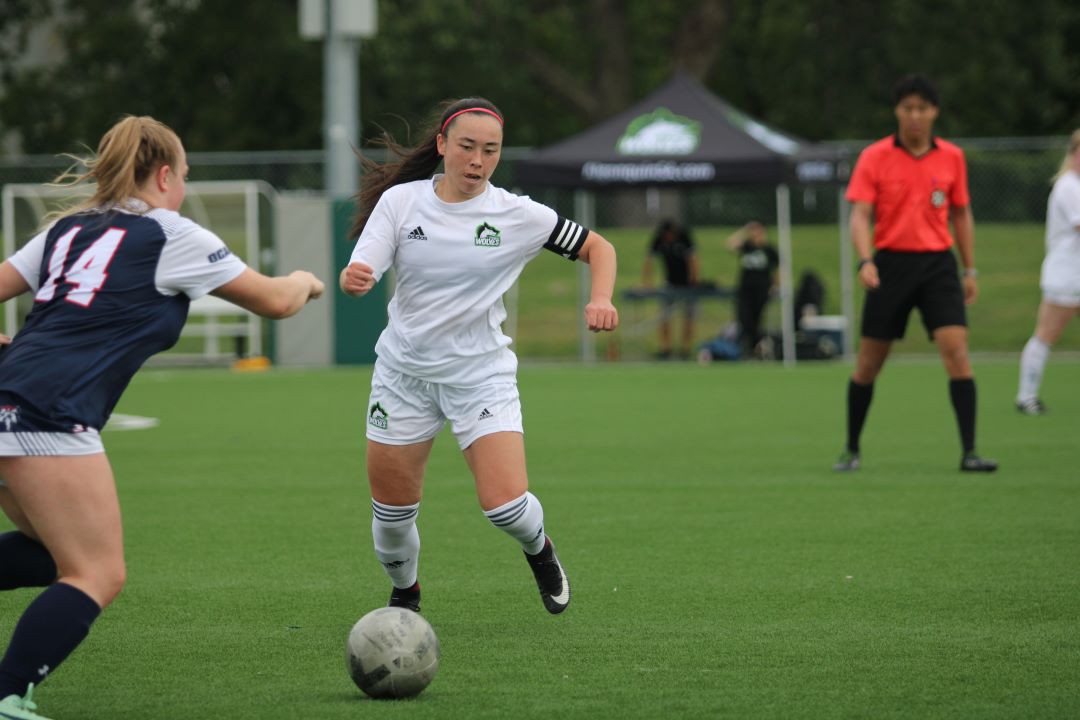 The Wolves scored their 14th unanswered goal since their first match in the 11th minute when Avery Cameron converted a corner, but they went into halftime at 1 – 1 after the Lancers found an equalizer.

“We didn’t play a great first half,” he said. “We were much better in the second half. We came out and scored seven goals, which is more indicative of how we can play. I’m just happy we finished much better.”

The Wolves started the second half rejuvenated and retook the lead within 30 seconds thanks to Makayla Pearl. The goal was her first of three on the day and opened the floodgates for the Wolves.

Pearl then scored from a direct free kick two minutes later, before Kayla DaSilva made it 4 –1 in the 56th minute. Captain Jolene Wong scored a penalty in the 59th minute and Pearl completed her hat trick in the 67th minute, scoring the Wolves’ sixth.

The central midfielder – who has now scored hat tricks in consecutive games – was very pleased to finally play in front of a home crowd after three games on the road.

“It was great to have our fans out and supporting,” said Pearl. “Luckily we’ve had fans supporting us away but there’s no place like home.”

Cameron, who opened the scoring, got her second in the 77th minute and 10 minutes later Jordan Blades-McHenry capped off the 8 – 1 thrashing. The goal kept her scoring streak alive with the striker now scoring in all four of the Wolves’ games this season. It also took her to seven goals, keeping her at the top of the scoring charts, with one more than Pearl.

After a busy start to the campaign, the Wolves now have a week off to work on improving for their upcoming matches.

“We’ve just got to mentally and physically prepare for the next challenge,” said Phillips. “We’ve had a tough stretch because we’ve played four games in seven days. So we’ve got to recover, get the kinks out and be ready to come back.”

The Wolves currently sit on top of the standings in the Ontario College Athletics Association’s East Division with 10 points from four matches.

They play the Centennial Colts on Sept. 23, at 6 p.m. and the Fleming Knights on Sept. 24, at 2 p.m. Both games are scheduled to be played at the Algonquin College Students’ Association sports field.