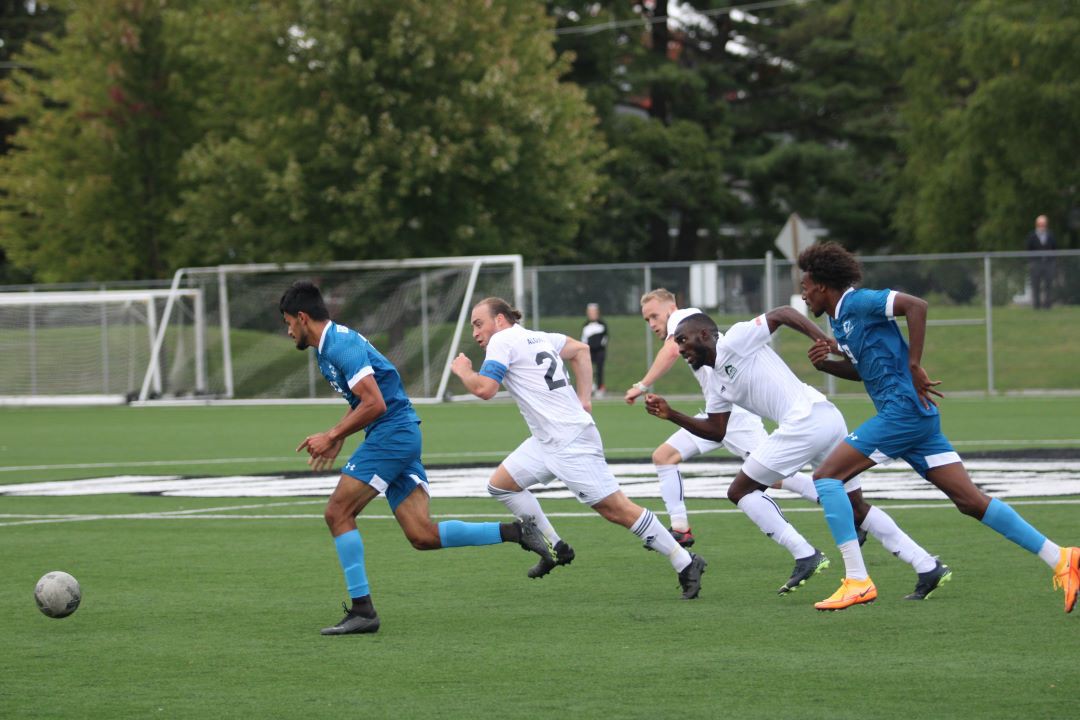 The Wolves and the Huskies chase down a loose ball. Photo credit: Kolbe Devaux

The Algonquin College men’s soccer team saw its perfect start come crashing to a halt in its home opener on Saturday afternoon.

The Wolves lost to the George Brown Huskies 1 – 0 in front of a very engaged home crowd, particularly towards the end of the game as the hosts tried to find a goal.

Oscar Forward, holding midfielder for the Wolves, was disappointed with the result but felt his teammates fought well.

“We’ve had a lot of games in the past two weeks and it felt like we crumbled apart,” he said. “We showed character at the end but it was a difficult game.”

The hosts started the game brightly, but slowly the Huskies took control of the match. Most of the action took place in the middle of the field, with the visitors having a slight advantage in possession.

In what was a tight first half with several ill-tempered fouls, the Wolves did manage to put the ball in the back of the net. However, the goal was called off because of an offside and the two teams went into halftime on level terms.

The he Wolves conceded their first goal of the season in the 64th minute. The Huskies then stifled the home team’s attempts to salvage a point as both the weather and the spirit of the match soured.

“We changed our formation to try to get more people forward and we came close to finding some success,” said head coach Angus Wong, speaking after the defeat. “We had some chances late but just didn’t get the end product. However, I think the guys fought well at the end and played with some urgency.”

The Wolves created one great opportunity to equalize in the last 10 minutes before the referee added seven minutes of extra time due to the stop–start nature of the game. However, they couldn’t break down the Huskies’ defence and dropped their first points of the season.

Looking ahead, Wong said the team has room to improve despite their overall strong start.

“There’s a few things we’ll have to work on to prepare us for the weekend coming up and the rest of the season,” he said. “Hopefully this week we have four good sessions going into Friday’s game and we can get better results on the weekend.”

The head coach is optimistic about his team’s performances as the season progresses.

“Having four games in eight days is tough, but we deal with this part of the schedule now and at the end of the season we have a little more time between games. Hopefully that spacing helps us going forward into the post-season,” said Wong.

Both games are scheduled to be played at the Algonquin College Students’ Association sports field.