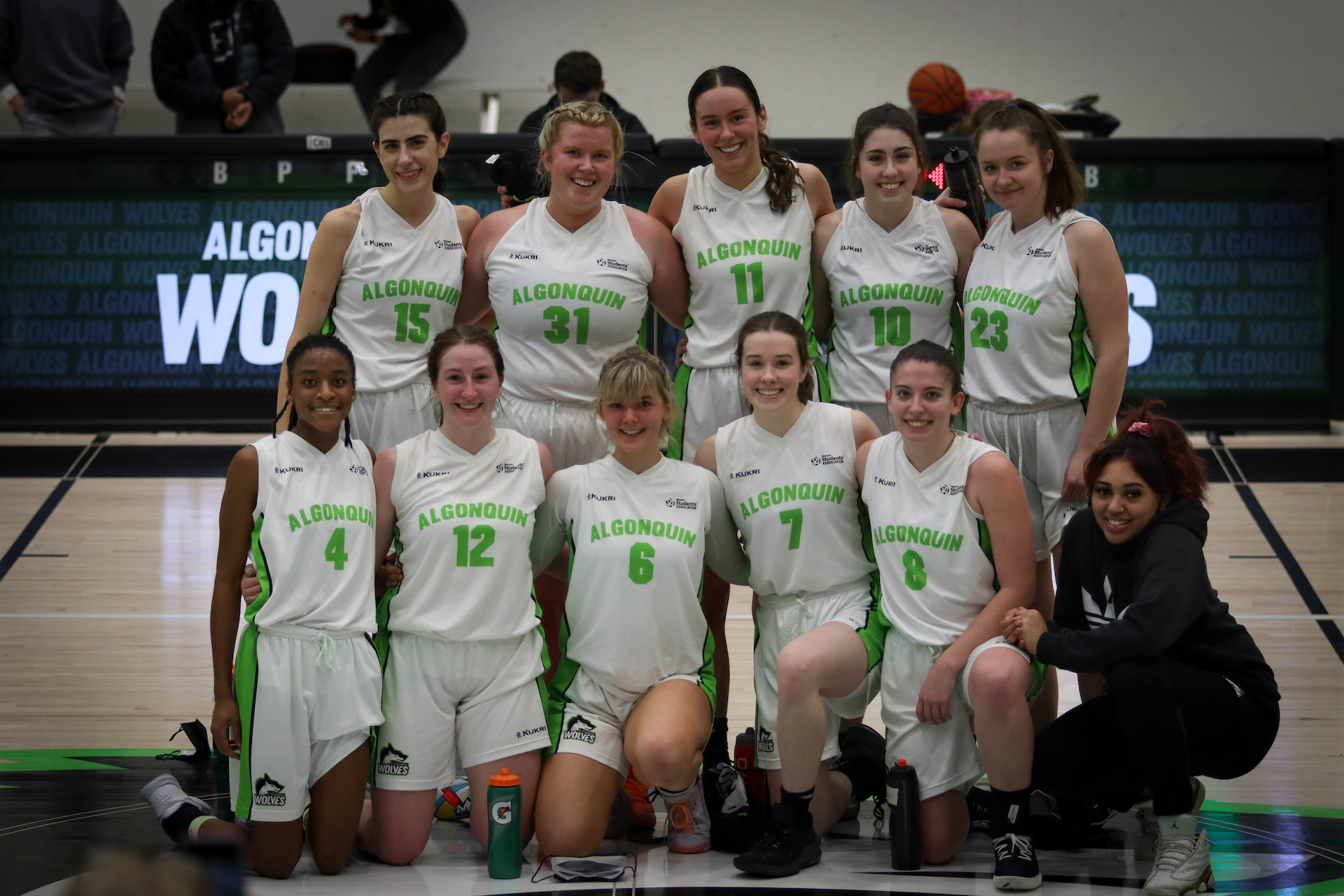 The Algonquin Wolves after their victory over the Lambton Lions. They went undefeated at home this season. Photo credit: Aadil Naik

The team is heading to Windsor for the semi-finals of the championship with a perfect record on their home court.

“I feel great,” he said. “That second quarter definitely scared me a little bit, but at half-time we talked about sticking to the game plan.”

The Wolves started very strong against the Lions, taking a 24-7 lead into the second quarter. However, things took a turn for the worse as the home team scored a season low three points in the quarter and went into half-time down 27-30.

“They bought in for that second half and it just worked,” said McLean. “We started to get the open shots we wanted, the open easy layups and the open threes. The second half was perfect.”

Algonquin started the third quarter energetically. They forced the Lions into many offensive mistakes, held them to only nine points and led 44-39 going into the fourth quarter.

The Wolves then pulled away, scoring the first 11 points of the quarter. They only gave up six points and continued to perform strongly on offense, winning by 21 points, 66-45.

Their semi-final opponents are the St. Clair Saints, whom McLean praised generously.

“It’s going to be a good match up. St. Clair won all their games this season and are the number one team in the west,” he said. “They had a number of returning players, which is a huge advantage, and are a very well coached team that works hard.”

Looking back on the season – his team has only lost one time so far – the head coach attributed the success to his players.

“That’s credit to these girls. They’ve bought into what we wanted to do this year in terms of competing, learning and getting better every day,” said McLean, after the game. “They work hard, they support each other and it’s a fun group to coach because they’re so supportive.”

Rookie guard Dasia McDonald – top scorer of the game with 25 points – was ecstatic about the Wolves’ deep playoff run.

“It’s pretty amazing. At the beginning we didn’t know if we were going to have a season, so being able to just push through and get to the semi-finals is awesome,” she said.

Like her head coach, McDonald was happy with the way the team performed in their final home game of the season.

“I feel really good because we all trusted each other,” said McDonald. “That helps you better individually and we stepped up on defense. Playing better defense helps with transitions and turns into easy points.”

The Wolves are in the semi-finals along with the Humber Hawks, Niagara Knights and St. Clair Saints.

All four games will be played at the St. Clair College Windsor campus.