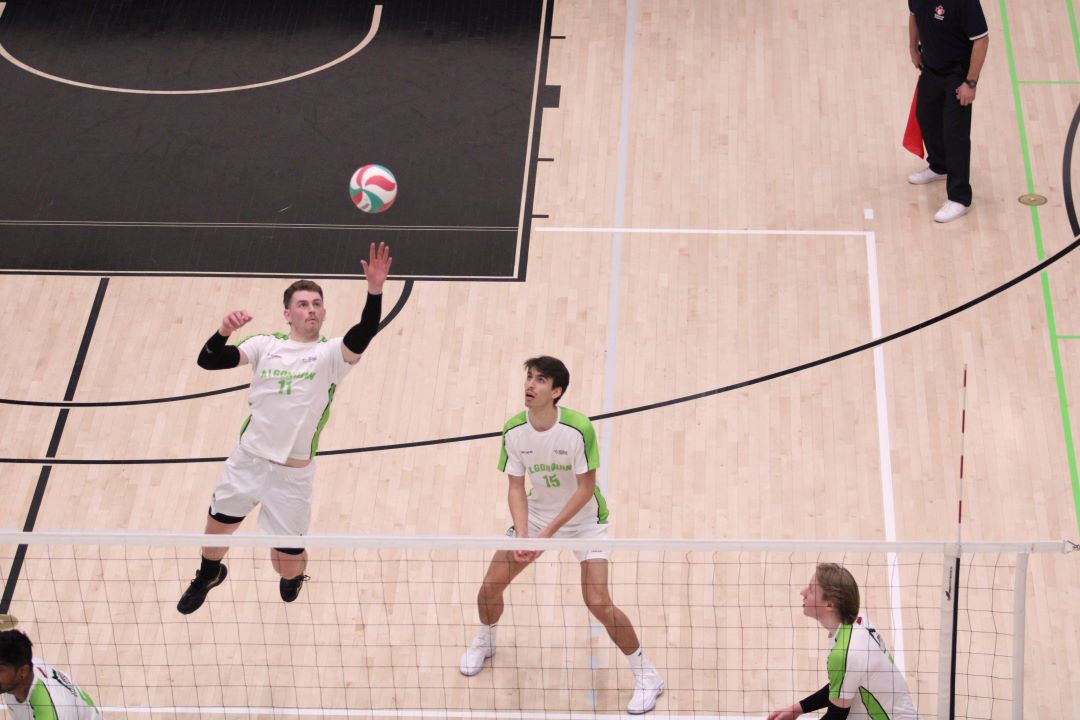 In their penultimate match of the semester, the Wolves overcame a mistake-riddled performance to claim victory against the Fleming Knights in front of a raucous home crowd.

The hosts played their best volleyball to close out the fifth set and snatch what appeared to be an unlikely victory on Nov. 26.

“It’s clear to see that not everything went right tonight,” said head coach Jelle Kooijman. “The team just showed a lot of heart, a lot of good competitiveness. They just kept playing, kept in it, kept believing so I’m just going to enjoy the fact that we were able to pull something out.”

For Liam Arnold-Paquette, an outside, the chaotic nature of his team’s performance comes down to effort.

“We tend to come out with the right intentions and the right ideas,” he said. “But as we get up and we get comfortable we start to let off and in our league there are no opponents who will let us take the game for free. We need to show up and execute.”

The first set saw an even contest until the Wolves opened a 15-11 lead. They extended their advantage to nine points and claimed the set 25-16. However, they dropped the second set when the Knights returned the favour, pulling away late in the set and sealing it 25-19.

The Knights then started the third set strongly but the Wolves came back, opened a late lead and clinched the set 25-19, putting them ahead at two sets to one.

Once again, the Knights started the following set strongly and they opened a late lead, after the Wolves came back, to clinch the set 25-17 and tie the match up at two sets all.

In the deciding set, the visitors repeated their strong starts and were just three points from victory at 12-9 when the Wolves called a timeout. The Knights never won another point after that.

“We often talk about playing with courage and I think in that moment we unlocked playing with courage. We go for it, we do exactly what we planned and we execute our game. When we do that, we’re a really good volleyball team and we can pick up a lot of points,” said Kooijman.

The Wolves scored six straight points, three each on either side of a Knights timeout, to turn a frustrating, error-filled performance into a sensational win.

Arnold-Paquette agreed with his coach’s assessment.

“I think that’s something we’re very capable of way more often than we end up doing it,” he said. “Being able to play at the level we know we can for the whole game, that’s something we’ve struggled with all season but we’re slowly getting better at it.”

The bounce-back win kept the Wolves in third place in the Ontario College Athletics Association’s East Division with a 6-3 record after nine games. The Wolves were next scheduled to play the Centennial Colts on Dec. 3.