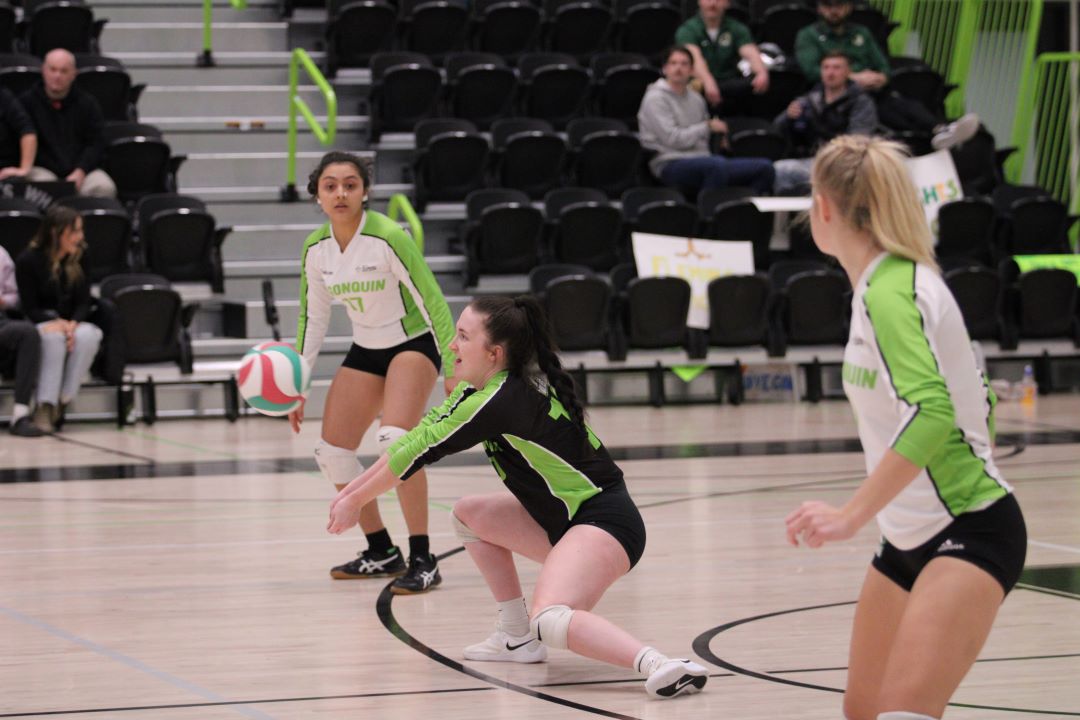 The first half of the season for the Algonquin Wolves women’s volleyball team has emulated a yo-yo.

In their six matches before hosting the Fleming Knights on Nov. 26, the Wolves had won three and lost three and their season record was 5-5.

They also had the misfortune of losing one of their starters in the lead-up to their away trip to Canadore, a game they went on to lose.

For head coach Everton Senior, the loss played a massive part in that result and in their performance against the Knights.

“We had a significant injury going into Canadore the day before that match,” he said. “It threw our sync off. We were playing some pretty good ball and it messed up our starting line. We went in really flat and didn’t have a good game.”

“Coming into today we’re playing a team that’s kind of finding their way and they struggle a little bit with ball control. That makes it difficult for our team to get some continuity. My emphasis was for the girls to focus on our side and control what we do.”

Early in the first set, the Knights held a 5-4 advantage, but the hosts scored nine of the next 10 points to lead 13-6. They maintained their seven-point lead until late in the set when the Knights closed to within three. The Wolves scored the next two points to take the set 25 -20 and lead in the match.

The second set saw the Wolves start well and build another seven-point lead, 19-12, before the Knights scored their 13th and last point of the set. The Wolves proceeded to score the next six consecutive points and won the set 25-13, taking a 2-0 lead in sets.

For middle Kristina Renwick, the challenge of incorporating different players was exciting.

“I think it was really great that we were able to use a bunch of our players today,” she said. “We tried a couple of different lineups that we don’t usually do, had some people in that don’t usually play and I think we came into it with a really great mindset of just being ready to go.”

The Wolves have one more game before the semester break, a home match against the Centennial Colts.

The win meant the Wolves’ record moved back above .500 at 5-4 on the season. They remained in fifth place in the Ontario College Athletics Association’s East Division