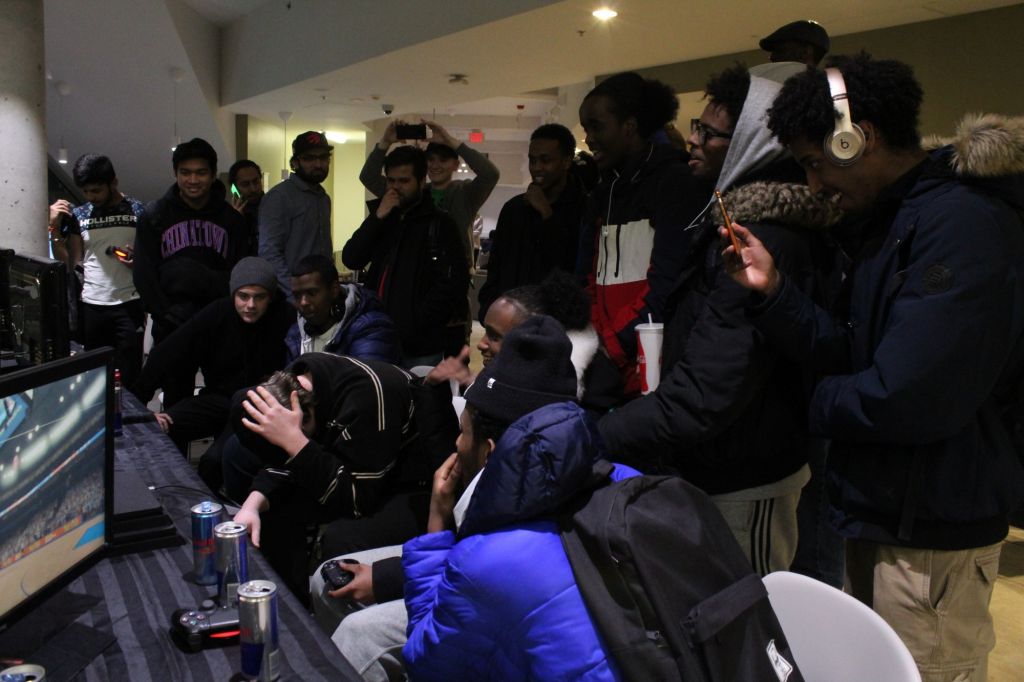 Danish exchange student Anders Jaurnow was frustrated after missing a shot in NBA 2K19. He and Moussab Abdillahi performed a nail-biting game which attracted dozens of other gamers in the tournament. Photo credit: Joseph Wang

The score is 60-60 and the clock is running down. An NBA 2K19 game between computer programming student Moussab Abdillahi and exchange student Anders Jaurnow from Denmark is raging tensely on a PS4 console.

A group of about 15 students gather around the monitors. Eyes are drawn to the screen to see which side will prevail. The two competitors have brought the game into the second overtime period. A single shot can decide the final result.

When one is missed, the “aws” and “oos” are repeated around the gathering. Jaurnow grabs his head in frustration; Abdillahi also missed some shots. Both sides are attacking firecely on their opponents’ line of defense.

Then, nearly as quickly as a shot happens, the match ends. Surrounded by the cheering audience, Abdillahi is declared the winner of this nail-biting game.

It was the semi-final scene of the We Got Game! Campus Esports Tournament which took place in the student commons, right outside the theatre, on Feb. 26. It was attended by about 100 gamers.

As one of the many participants who attended the tournament, Abdillahi was glad for the fact that he won the semi-final.

“I feel pretty nice,” said Abdillahi, “because It’s a pretty competitive game. I didn’t know I was going to get there, to be honest. I thought after two games I would lose, but luck was on my side.”

Dave Miller, owner of the Mississauga-based interactive gaming company We Got Game! and sponsor of the tournament, spoke highly of the performance of Abdillahi and Jaurnow.

“What happened was very emotional,” said Miller. “Each shot happened within the last 30 seconds.

“I think that was like one of the highlights of the event today, just because of that atmosphere of going to the next level.”

NBA 2K19 was not the sole character in the show. FIFA 19 and Super Smash Bros. Ultimate were also part of the tournament and they had attracted a number of participants.

There was more than one winner in the tournament, for this was a qualifying game. For NBA 2K19 and FIFA 19, two winners came out from the finals whereas for Smash Bros., there were four winners.

Winners were qualifiers for the following Extramural Tournament which will take place at Humber College Toronto on March. 9. On behalf of Algonquin College, they will compete with players from other institutions. The winners for each game will then be awarded prizes. Among all three games, FIFA 19 has the highest prize of $2,000.

“I’m really excited,” said firefighting student Liam Runciman, winner for FIFA 19, “especially for where the (next) tournament is. I have a really close friend who lives by there, so I’m definitely getting encouragement from him.

Runciman was a special winner. He lost in the final, but when Miller told him that he could have the second chance to become the winner since there was an extra seat for the new qualifier, he seized the opportunity. He eventually survived in the redemption match after powering through the back-and-forth situation in the game, scoring one goal over his competitor.

“To come back from the dead,” said Runciman, “it was awesome.”

There was something else besides prizes the contestants were looking for.

Attending the tournament for the first time, business administration student Kirtus Selleck had brought back his childhood memory from Smash Bros.

“Ever since I was a kid, I’ve been using Mario in the game,” said Kirtus. “I literally used him for nostalgic and sentimental value.”

The atmosphere of the tournament was also appealing to participants.

“The whole tournament was fantastic,” said computer system technician student Abdi Hussein, winner for Smash Bros. “It’s a great way to connect with the college and other people, so I think it’s a phenomenal idea.”

According to Miller, this was the first time for We Got Game! to run their competition in school-versus-school format.

“We’ve done it individually with schools,” said Miller, “but now we put 11 schools together.

“Qualifiers represent their schools as if they’re in basketball teams or volleyball teams. This is esports and everybody has a chance, based on your skills and such.”

Allison Barnes, events programmer of the Students’ Association, told the Times that the event is an opportunity for the college’s esports club.

“There are lots of people here who like esports,” said Barnes. “It helps our club initiative because students here can learn about our esports club.”

The score is 60-60 and the clock is running down. An NBA 2K19 game between computer programming student Moussab Abdillahi and exchange student Anders Jaurnow from Denmark is raging tensely on a PS4 console. A group of about 15 students gather around the monitors. Eyes are drawn to the screen to see which side will […]

The score is 60-60 and the clock is running down. An NBA 2K19 game between computer programming student Moussab Abdillahi and exchange student Anders Jaurnow from Denmark is raging tensely on a PS4 console. A group of about 15 students gather around the monitors. Eyes are drawn to the screen to see which side will […]