Halle-loo, Shangela is in the house 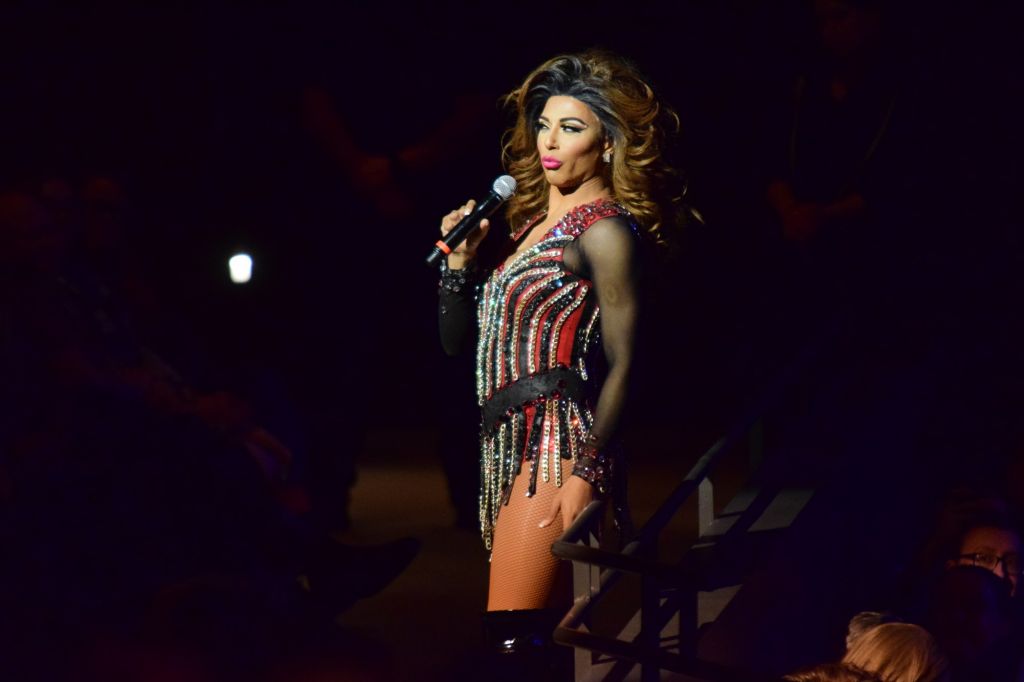 As Black History Month came to an end, Shangela, a contestant from RuPaul’s Drag Race made her first appearance at Algonquin Commons Theatre on Feb. 28 to not only stay — but to slay.

Dressed in a sequenced bodysuit, the drag queen danced and sang to a medley of Beyoncé’s hit songs as well as her own rendition of Bruno Mars’ Uptown Funk in front of approximately a 100 students.

Shangela has been on RuPaul’s Drag Race seasons two and three as well All-Stars. She was also one of the first drag queens to tour 184 cities around the world.

Many students were excited to see her at the college. Students were dressed up for a good time and shared their excitement with other longtime fans of the show.

“I like her work ethic,” said University of Ottawa theatre student, Kyle Cameron. “She’s been grinding since day one – since season two of Drag Race which was almost 10 years ago. It’s the you-get-what-you-pay-for story where the work [she] put in ends up paying off.”

The drag queen has also made several guest appearances on a variety of television shows such as Glee, X-Files as well as starring as herself in the hit movie A Star is Born.

Throughout her show on Thursday night, Shangela surfed through the audience and gave students an opportunity to ask questions. She answered multiple questions in the topics ranging from the first time she appeared in drag to her relationship with Lady Gaga.

As students were holding up their phones to capture Shangela, the drag queen continued to encourage them to post the moment on their social media. She said that anyone is capable of creating art and content because of how convenient it is.

“The power is right in your hands,” she said. “If you have a phone – you’re making a movie right there. If you have a phone, you automatically have the power to create and you can post and there’s so much great content.”

She also believes that social media is not all about how many followers a person has, but rather the inspiration one can take away from posts of other people.

“I appreciate you guys following me on Instagram,” she said. “It’s not all about the followers – I tell people, ‘you don’t have to follow me’ — I’m already nervous looking around like ‘who’s behind me?’’

It was also revealed by Shangela that she had seen the script for A Star is Born, specifically for Lady Gaga’s role. However, she chose not to take the role.

“I didn’t go in for the role because it was for a Marilyn Monroe impersonator,” she said. “And look, I’m an actress – no matter how long I stay out the sun, I’m not going to look like Marilyn Monroe.”

She had first met Lady Gaga in 2013 where she had then appeared in the lyric music video for her hit song Applause along with other drag queens from RuPaul’s Drag Race.

Later on, she shared how it felt to be dressed in drag for the first time, revealing that it wasn’t what she thought it would be.

“During college – I had a little goatee,” Shangela recalls. “I shaved it off in order to do drag. It was so shocking to myself without the goatee.” Even though she knew the skills needed to be developed over the years, it made her feel confident to continue to improve.

She also believes that the drag esthetic itself creates a sense of empowerment for someone who creates it.

Since the establishment of RuPaul’s Drag Race, the show itself has expanded in diversity. The way, in which the show is heading, she believes that there is a place for everyone.

“The show continues to expand to be more inclusive and I think that’s what we should be going with,” said Shangela. “So many brilliant people are starting to write to include the LGBTQIA people. Even if it’s not scripted, the opportunity is something that’s authentic and gives them a time to shine.”

Shangela also gave advice to students that trying to fit into beauty standards is not something to strive for.

“You don’t have to fit anyone else’s mold of what is beautiful, what is accepted. As long as you look in the mirror and you love yourself that’s where you have to start it. You have to love every part of your soul from the inside-out.”

Her energy and spirit continues to be uplifted no matter how busy her life gets. She believes that the change of a negative attitude into a positive one is something that will keep one’s spirit going.

“[Feeling conquered] is like a gas tank, you run it and sometimes you run out. You got to feel it up yourself; you can’t look for other people to fill it up for you.”