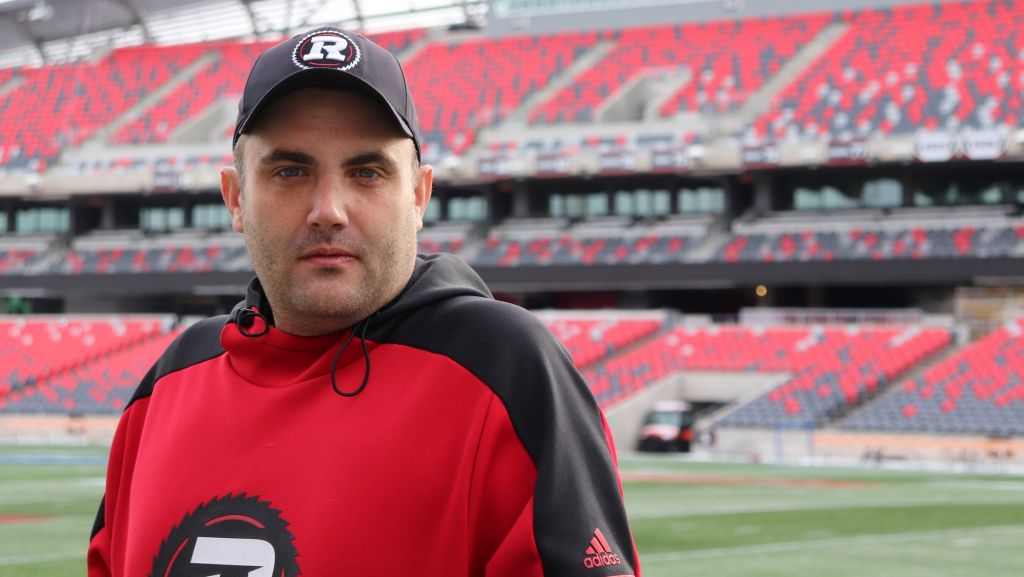 Sept. 12, 2001 was not a normal production day for the Nepean This Week community newspaper. In the wake of the 9/11 attacks, staff were running around the newsroom trying to complete the paper as soon as they could. Tensions were running high as the team had never covered a story of this magnitude before — it was a first for everyone involved.

It was also a first for a young man on the first day of his high school co-op placement.

Then a fresh-faced 16-year-old, Chris Hofley soaked it all in, and by the time his placement was over, he knew he wanted to pursue a career in journalism.

However, after 10 years in the field, his career path changed, but the same openness to new experiences that he demonstrated when he joined that placement is evident throughout the different jobs that he has held. As he made his way to new opportunities, his passion for the work that he does has stood out as his most defining characteristic.

Now at the age of 33, Hofley — a communications and content specialist for the Ottawa Sports and Entertainment Group — manages the day-to-day media and public relations operations for the Ottawa Redblacks and the Ottawa 67’s.

The opportunity to apply for this job came through Graeme Ivory, the former director of communications and content for OSEG. The pair got to know each other when Hofley was covering the Ottawa Fury, Ottawa Redblacks and Ottawa 67’s for the Ottawa Sun. From his experience with Hofley, Ivory knew he wanted him to join OSEG when a job in the communications department opened up.

“I had a good vibe from the guy,” Ivory said. “He was professional, very good at his job, knew the teams well, knew sports, was a fantastic writer and had a good rapport with the other media so perhaps he had never been on that side of the fence in kind of the media relations and communications side, I didn’t think that it would be too much of a stretch for him.”

As they started working closely together, Ivory was impressed by the passion that Hofley demonstrated. “He really immerses himself in it and I think that’s the best way to get the most out of what you do,” Ivory said. “He doesn’t look at it as a job; it’s almost at the point where it’s kind of like a vocation because you’re really dedicating so much of yourself to it. So I’ve always believed that you hire for passion first and that’s why I hired him in the first place and I think it’s his best characteristic that’s for sure.”

Passion for his work has helped Hofley, but he still had to put in the work.

After high school, Hofley entered the Algonquin College journalism program where he learned to perfect his skills. Being in a college environment right out of high school was big for Hofley, as he felt that the hands-on teaching method of the college gave him the tools to be successful in the field.

“You’re not spending time in a lecture hall listening to the theory of journalism,” Hofley said. “You actually get to do stuff, so when I got a job out of that, I really felt like I knew what I was doing to a certain extent.”

His first job was with the Kemptville Advance, which later became part of the Ottawa Region Media Group. That’s where he got the opportunity to cover multiple different subjects as a reporter.

Former publisher for the paper Diane Banks remembers Hofley even though they haven’t worked together in over 10 years.

“I just always remember that he was always in a good mood and that he seemed to be very well-liked and received in the community,” Banks said.

It was during his stint with the ORMG that Hofley became closer to one of his fellow Algonquin College journalism alumni Devon Babin — who was also employed by the same company.

Although they were not very close during their time in school, Babin always respected Hofley and had high praise for his abilities.

“Chris was always good at finding an interesting angle or something different that no one else thought of so I give him a lot of credit for that,” Babin said.

He also went on to talk about what he considered to be one of Hofley’s biggest strengths.

“He definitely has a great eye and some really good abilities behind the camera,” Babin said. “Those have come a long way too, it’s not just something that comes overnight.”

After his time with the ORMG, Hofley combined his proficiency with the camera and his journalistic skills in order to accomplish some freelancing opportunities.

However, because of the unstable nature of freelance reporting, Hofley had to take up a job in media translation.

“The translation thing was the most dull job in the world but it paid so well,” Hofley said.

“I got into that for a little bit, did that for a year or whatever and got another job out of that, and you know, moved on from that…they paid really, really well but it was mind-numbing.”

Even though he did not enjoy the translation job, his passion and openness to new experiences remained as he shifted to his next opportunity.

“I was the managing editor of the Centretown Buzz – which was a non-for-profit monthly newspaper downtown – that I did for almost a year,” Hofley said. “It was like a one man show…I sold ads, I laid the paper out, I wrote, I had to find volunteer writers to fill the pages, but the title of it, being managing editor somewhere, that was kind of my stepping stone to getting into the Sun. It looked really good.”

Once he made his way to the Sun, Hofley acted as a general assignment reporter covering a variety of topics including crime and politics. But after two years covering these kinds of stories, Hofley felt like he was in need of a change.

“I had done a lot of heavy stuff so I was getting a little burnt out, you know,” Hofley said.

He told himself that if an opportunity to do something else came up, he would give it a go.   Shortly thereafter, a golden opportunity presented itself when the Ottawa Fury soccer club was established.

“My editor at the time was saying that they wanted to have someone dedicated to covering that team and they needed a little bit of other sports stuff on the side, so I transitioned into that,” Hofley said.

Although he never thought of writing for the sports section, Hofley always had a passion for it.   His brother, Nicholas, remembered how sports was a big part of Hofley’s life.

“He’s always been really interested in sports — local teams especially — so it wasn’t a surprise that that’s where he ended up because it’s just kind of been an interest the whole time,” he said.

After another couple of years covering sports for the Sun, Hofley was craving a new challenge. With Graeme Ivory pushing him to apply for the communications position with OSEG, Hofley considered the idea when the Sun started cutting jobs.

“It was crazy timing,” Hofley said. “I was still at the Sun and I just started talking to them about this job and starting to feel like alright maybe it’s time for a change, and then the massive layoffs happened and we all got laid off.”

This forced Hofley’s hand, but his passion for sports has made him thrive in his new role.

“Just being part of something this big, you’re part of a group, you feel like everyone is pulling in the same direction most of the time and you know what the goal is, it’s not murky, you’re just trying to get to championships.”