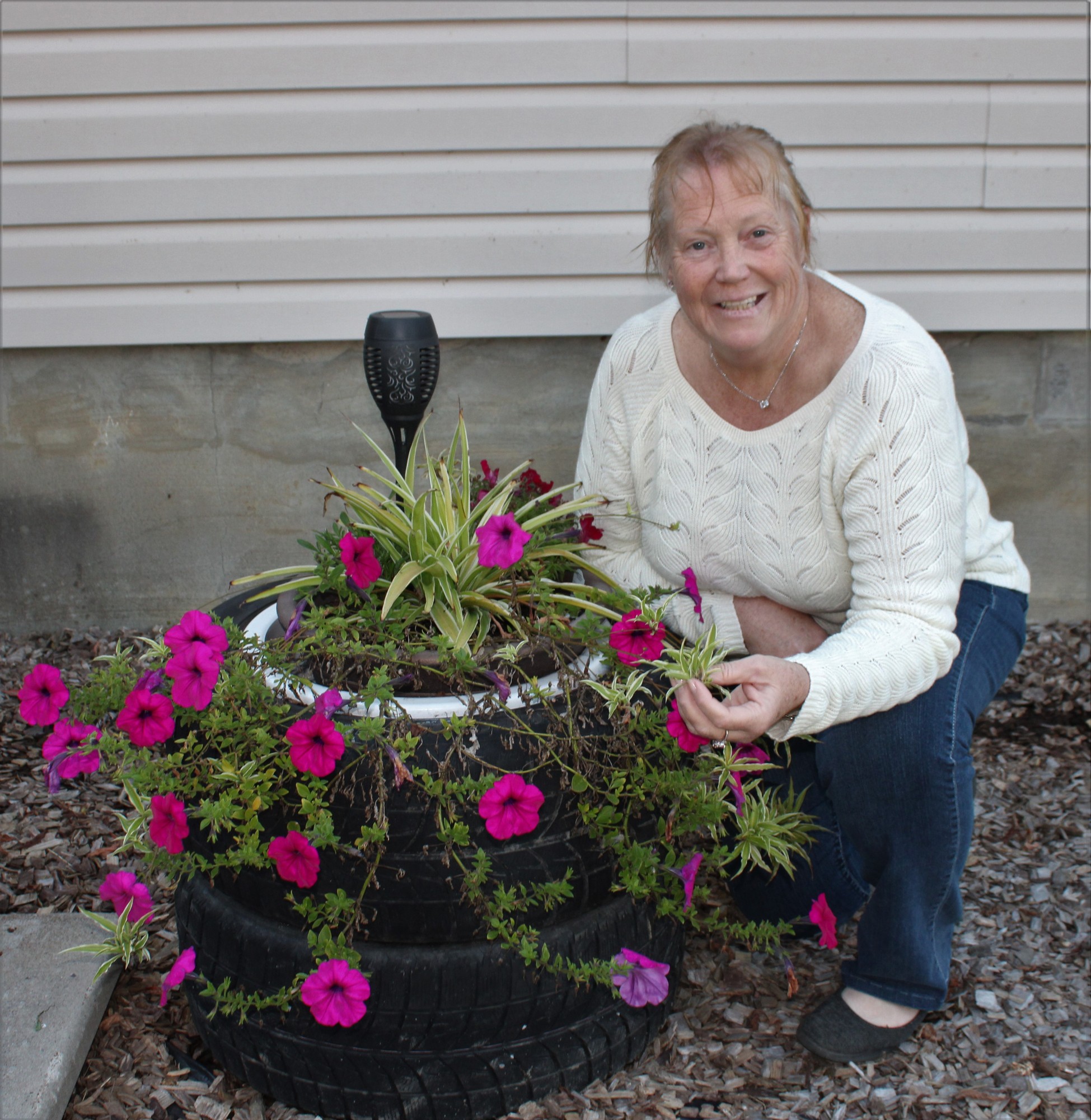 Carol Johnson, a first-semester horticulture student, enjoys spending time in her flower garden from early spring through to the last flowers of fall. She is shown with one of her recycling projects which sees a planter, made from old tires, with potted petunias and a spider plant in her front garden. Photo credit: Carol Goddard

In the years between my graduation from Carleton with a BA in political science in1980, I had raised a family, volunteered for several organizations, worked as a library technician and for 10 years had reported for a weekly newspaper on a part-time basis. It occurred to me what I liked most of all was helping people find answers to questions easily, story telling and recording details about community events for the future. In other words, I wanted to further develop my journalistic skills and receive accreditation as a journalist by getting my diploma.

I must admit there was a bit of a culture shock during my first day at Algonquin. As I drove from Cornwall to Ottawa, completely disregarding the GPS as to the fastest route, I arrived late to AC. After finding my parking lot, I was unable to access HONK, hurried away with a little concern about my car being towed and started towards N building. Not realizing there were entrance portals due to the pandemic, I walked around the building, trying all the locked doors and wasn’t sure what to do. It took a phone call to one of my professors to guide me to an entrance and then my class.

It was full of strangers, 99 per cent of them younger than myself, closer in age to the students in the high school where I had worked last year. The nice thing was that they seemed welcoming and helpful. My anxiety level started to lessen. I recalled the many times throughout my life I had to gather up the strength to get through something new preparing me for the adventure which lay ahead.

Things had changed drastically in the forty-odd years since I last attended a post secondary institution in the 1970s. Back then, the only computer was a machine which occupied most of the “computer room” and data was input with cards. Today, laptops have replaced notebooks and despite having worked in an educational setting for almost two decades and am relatively computer literate, being a student in this technological setting was daunting.

Was I the only “older” person returning to college just now?

“Currently there are 17,596 students registered full-time at Algonquin College,” said Bruce Hickey, a communications support officer at the college. “Of those 6,350 are 25 or older and range in age from 25 to 67. This equates to 36.1 per cent of the student population.”

Information on government and college/university sites confirmed what I had learned anecdotally. Adults return to school to develop their skill sets, achieve a personal goal, increasing their earning potential and receiving second career training.

Carol Johnson, a first-year student the horticultural program, is a returning to the classroom after several years of small business experience in her portfolio. Raised in an agricultural setting, Johnson is an accomplished gardener. She came back to college because she feels learning about horticulture will allow her the ability to create “spaces that will bring a sense of calm and peace” to people and communities as well as re-connecting them to nature.

Johnson says she enjoys the lab periods, where she and her fellow students are all able to help each other. One of the more challenging aspects of her return to college has been using the digital resources such as Brightspace. A few weeks into the term, however, “it is going much better and becoming easier to navigate,” she said.

One new skill Johnson is proud of is that she can now use a piece of surveying equipment known as a transit. Johnson says if she hadn’t returned to school, she probably would never have learned how to use a transit anywhere else.

Andrea Kennedy, a classmate of mine in the second year of the journalism program, has returned to the classroom following several years working in marketing and editing. After moving to Ottawa recently, she was interested in pursuing further education.

Kennedy says she views the program as providing her with opportunities to, for instance, intern at “somewhere like the CBC,” learn new skills and broaden her network.

If my family had a motto, it would “Let the Love of Learning Flourish” and throughout my life I have personally experienced the joy of learning something new each day. Those who decide to return to post secondary education after spending time in the work force demonstrate the reality of life-long learning and the opportunity to expand one’s outlook on life.