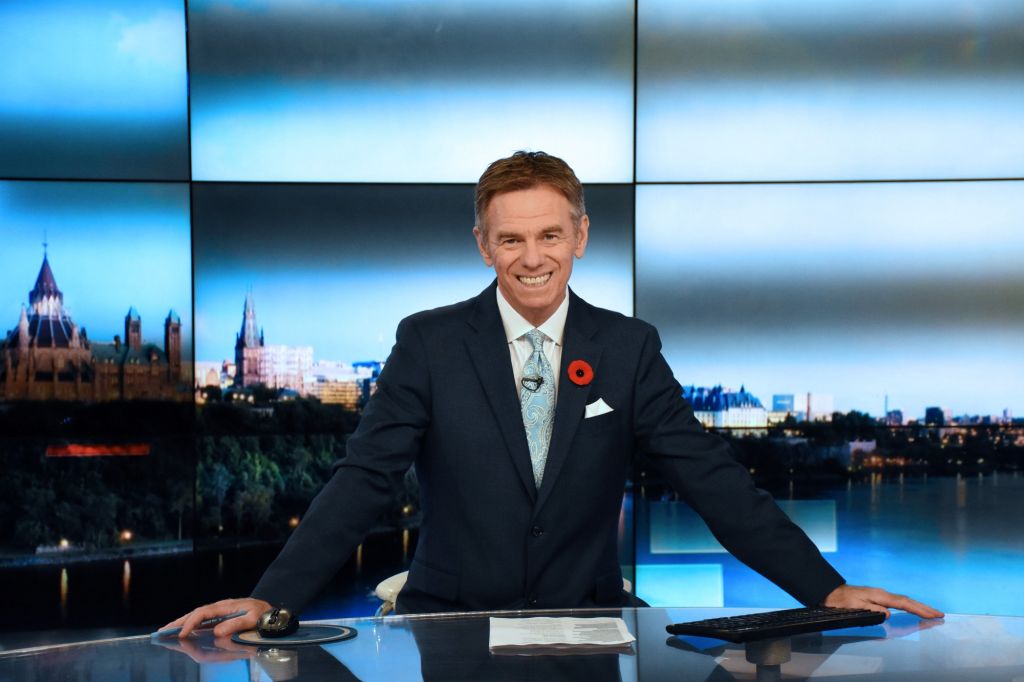 The producer calls cut, and the television studio begins to darken as the bright lights shut off one by one. Michael O’Byrne sits confidently in his chair centered at the anchor’s desk, gathering his notes and congratulating his co-hosts on delivering yet another successful live show.

O’Byrne has mastered the art of his trade, and he knows what he’s doing. In fact, no broadcaster in Ottawa has done this more than him. As of last September, O’Byrne is the longest running news television personality in Ottawa’s TV history.

“No one’s been on local TV longer than me,” says O’Byrne.

At a young age, O’Byrne knew that reporting news was a passion of his and something he wanted to pursue as a career.

“I was always a very inquisitive kid, I always asked questions, was always interested in the news.”

As a graduate from the Algonquin College journalism program, O’Byrne credits the majority of his success to the solid foundation he received there.

“It’s a great program; it really focuses on what you need to get a job,” said O’Byrne. “The reason I went to Algonquin and didn’t go to university is because I wanted a career fast, and I got a career fast.”

Quickly exceeding expectations, O’Byrne was only three weeks into classes when a story of his got published by the Ottawa Journal. His career at CJOH, now known as CTV Ottawa, began shortly after.

“Algonquin was the seed, and everything has grown from there,” said O’Byrne.

O’Byrne is grateful to have a career that gives him a platform where people know who he is and respect what he says. However, he sees no value in his celebrity status unless it can bring forward something valuable in return.

For O’Byrne, journalism and philanthropy go hand in hand. The need is too great for him to pass up any chance to help out. He finds it flattering that people think he can help make a difference.

“If I can lend my name and my voice to a charity that will help children get breakfast in the morning, or help fund United Way programs, or to help raise money for Algonquin College so they can expand programs and make sure all the young people can get the education they need, so that their seed can get planted and their careers can grow, that’s my way of giving back to a community that’s been very good to me.” says O’Byrne.

His role model and biggest influencer was Max Keeping. Keeping was the news director and news anchor for CJOH before passing away in 2015. Keeping was the longest news personality in Ottawa’s television history before O’Byrne passed him this September.

“Max was a guy who was a great newsman. He taught us all how to be better journalists but also taught us the importance of giving back to the community and how it all ties together,” says O’Byrne. “He really set the bar for us all to do all this, journalism and philanthropy.”

On Sept. 27, on behalf of Algonquin College, O’Byrne was presented with the Rena Bowen Volunteer of Excellence award by fellow philanthropist and close friend, Moe Atallah.

“I am proud to say Michael is a very close friend of mine,” says Atallah. “I respect his friendship.”

Atallah was honored to present the award to his friend of 15 years.

“One of my heroes was Max Keeping because he’s done so much. I never realized that Michael has made the same if not more of an impact than Max Keeping.”

O’Byrne not only shares his time raising awareness and funds for the community, but also shares his knowledge and expertise for delivering news to young aspiring journalists.

CTV Ottawa’s noon producer, Carolan Lesaux, has worked with O’Byrne for almost 30 years. Throughout that time, she recalls fond memories of sharing laughs over the years and sharing family memories during the holidays. Lesaux remembers O’Byrne ready to help whenever it was needed.

“Michael’s been a huge mentor and teacher. He’s brought me along and really helped me with my writing,” says Lesaux. “He’s just a very warm person outside of the building as well.”

Leanne Cusack has been co-hosts with O’Byrne at CTV Ottawa since 1997, A television partnership like no other in Ottawa’s history. Cusack believes their mutual respect, comradery and genuine friendship with one another has continued to fuel their lengthy record-breaking partnership.

“You might assume that when someone’s been doing the same job for a long time, they have an attitude of good enough, or some complacency. Michael does not have that,” Cusack says. “There isn’t a story too small for him to cover and there isn’t a story that’s too challenging for him to handle with great ease.”

J.J. Clarke, weather forecaster for CTV, Ottawa has worked alongside O’Byrne for 33 years.

“We used to call him Dr. O’Byrne because he did so many medical stories, he was constantly in an operating room. We saw him in scrubs all the time,” Clarke recalls.

“He’s charming and authoritative both on and off screen. What you see is what you get with him.”

Aside from the television personality that makes up a huge portion of who he is, nothing is more important than family to O’Byrne. At the age of 19, O’Byrne married his childhood sweetheart Suzanne. Together for over 44 years, they have created a proud and beautiful life here in Ottawa.

Many opportunities presented themselves over the years for O’Byrne to relocate. Each time he and Suzanne laid out all their options.

“There were always more pros than cons, more money if you leave, new city,” says O’Byrne. “But it meant our kids would grow up not knowing their cousins, so we always decided to stay.”

Suzanne O’Byrne is inspired daily by her husband’s commitment to his family, friends and giving back to the community.

“He would do anything for anyone in need. And he is the best grandfather of all to two little boys, Brody and Dylan. When you hear them playing you wonder who the two boys are aged 4 and 6.”

The title of being the longest television news person on air in Ottawa’s TV history humbles O’Byrne. Much like his mentor Max Keeping did for him, O’Byrne will continue to inspire new generations of journalists to work hard and give back.

“Exceed any goals you that you have for yourself,” says O’Byrne. “Work harder than you’ve ever worked at anything in your life and come up with a lot of story ideas.”