You are here: Home / Featured Stories / News / Plastics on the way out 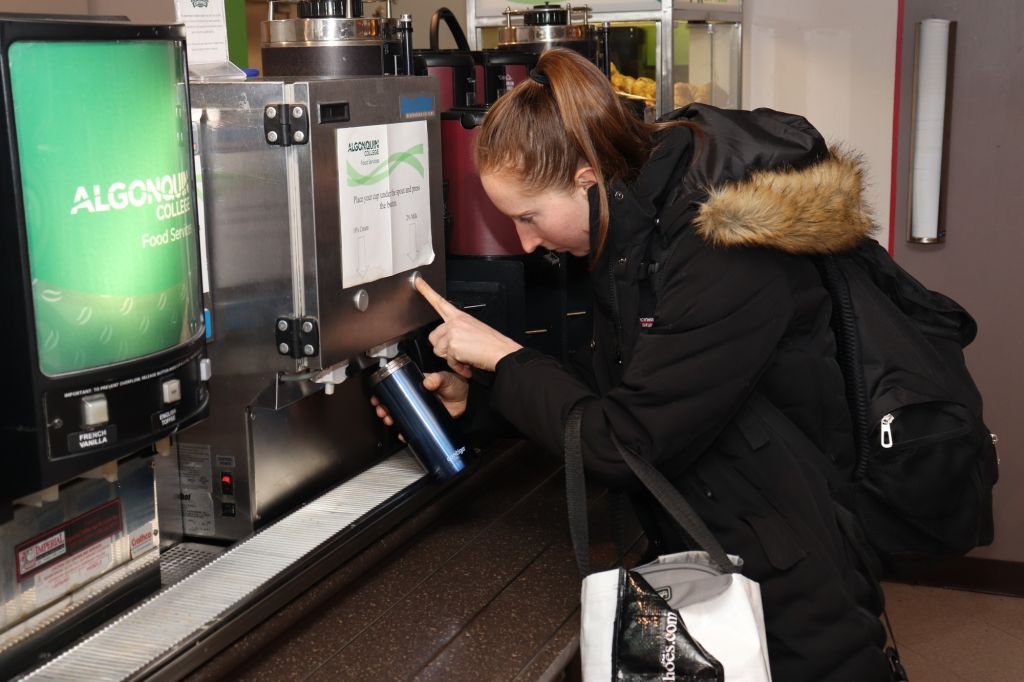 First-year firefighting student Jillian Perone fills her travel mug. She is taking advantage of the 10 per cent off deal for customers who bring their own cups. Photo credit: Mike Athey

Last semester, the college began phasing out plastic straws with their “Skip the Straw” initiative.

Straws at the Marketplace food court were moved near the cashier’s counter and replaced by sippy-style lids. Without the straws in a convenient location beside pop dispensers, their use has dropped.

Sippy-style lids will also be introduced to the smoothie counter in the near future.

“For those customers who want a straw, we’re going to give them a paper straw,” said Villeneuve. The goal is to eliminate all plastic straws over time.

These new lids, which replaced single-use plastic straws and “Coca-Cola lids”, are recyclable where the previous options were not.

“You’re eliminating two products that were not recyclable, that you’re throwing into the trash and replacing it with something that is recyclable,” said Villeneuve.

Students are also encouraged to bring their own reusable travel mugs to campus. Recently Sustainable Coffee Adventures has been advertising a 10 per cent off incentive for students who use their own mugs.

Many still use the disposable cups but a few students have begun taking advantage of the opportunity.

“You know, I just saw the ad and thought I might as well do it,” said firefighting student, Jillian Perone, after filling up her own mug for the first time.

Food Services is also making efforts to reduce single-use plastic containers and bowls. Instead of using items that are recyclable, they are moving to compostable plant-based products.

However, the Marketplace food court has been less successful convincing staff and students to use china plates despite advertising their availability on several televisions in the area.

In the run of an average day, the college has to clean around 12 plates, said Food Service employee, Jason Belanger. He said they were used “mostly in the morning and mostly by staff.”

Plates are not immediately visible when you enter the Marketplace. A small stack sits behind the counter at Kelly’s Grill and a large trolley is packed with them beside Chef’s Choice. However, the trolley has circular lids that cover the plates at all times, limiting awareness of their availability.

“We probably need to do another push of ‘Would you like to use a plate?'” said Villeneuve.

He said a lot of people are used to the convenience and just grab their food. Sometimes they don’t even eat it in the cafeteria and take it to go instead.

“A solution might be to say ‘no’ to plate instead of ‘yes’ to plate,” said sociology professor Chris Martin.

“The countries that have the highest amount of organ donors are the countries where you have to opt out, instead of having to opt in,” he said. “So if you had to opt out of plate instead of opt in, it would be more likely that people would actually just take it.”

Martin said humans generally want to be good people and don’t consciously want to hurt the Earth, but the “further we are from the guilt, the less guilt we actually feel. So out of sight, out of mind.”

“Because you don’t see what happens to the garbage next, because you don’t really understand where it goes, or even better yet, because it might say something on the container like ‘Green Box’, or something implying its good for the environment, you can absolve yourself of any guilt,” said Martin.

The road to a plastic-free Algonquin has been a long one. The Algonquin Times first began reporting on plastics awareness in 2014.

Food Services have new sustainability strategies in place to reduce single-use plastics. Last semester, the college began phasing out plastic straws with their “Skip the Straw” initiative. Straws at the Marketplace food court were moved near the cashier’s counter and replaced by sippy-style lids. Without the straws in a convenient location beside pop dispensers, their […]

Food Services have new sustainability strategies in place to reduce single-use plastics. Last semester, the college began phasing out plastic straws with their “Skip the Straw” initiative. Straws at the Marketplace food court were moved near the cashier’s counter and replaced by sippy-style lids. Without the straws in a convenient location beside pop dispensers, their […]