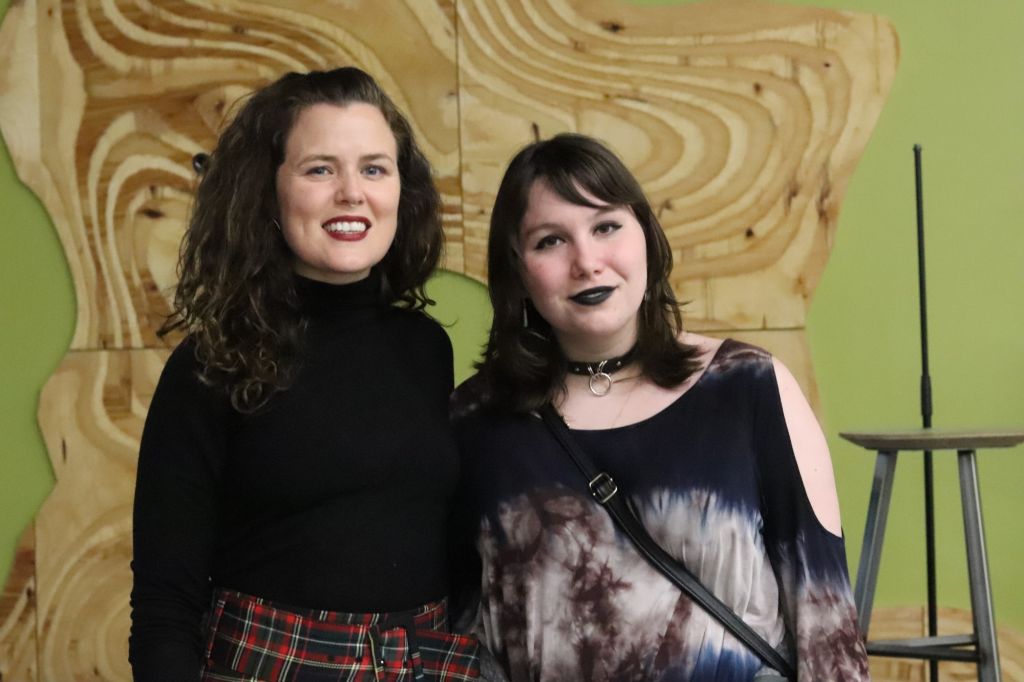 Iskwe with Terri O'Neill, who was inspired by the singer after growing up, and embracing her Inuit roots. Photo credit: Hritika Jimmy

Although Cree singer and community activist Iskwē wasn’t able to perform at the Juno Awards in Saskatoon on March 15 because they were cancelled due to the COVID-19 pandemic, she did perform in the Dare District on March 9 as part of the Students’ Association’s Intimate and Interactive event.

True to its name, the theme was Intimate and Interactive. Before the start of the event, when Iskwē was testing the mic and the sound system, there were 11 people. She got off stage and sat in the middle of the audience and performed acoustically with Laura C. Bates at the violin and Alex Mak at the guitar. She often performs with them at shows and concerts.

The audience members were eager to sit close to the singer and formed a circle around the performers.

“Growing up, I knew I was Inuit,” said Terri O’Neill, a 25-year-old returning student for CSI. “Seeing what other people are doing is beneficial to help me learn more about Indigenous people in general, especially with the recent protests going on in British Columbia.”

Iskwē’s first song was Little Star. “It talks about the responsibilities of the media and what makes our [Indigenous community] strong and beautiful,” she said.

After every performance, there was a window for the audience to ask Iskwē questions.

Eric Simms, a computer science technology student, was passing by when he heard her singing and someone motioned to him to come inside.

“It was kind of nice that we got to ask her questions, and learnt how people came into Canada and how she became an idol,” said the 18-year-old. “The songs were very beautiful.”

Iskwē started as a dancer and went on to study visual arts and music in her 20s.

She is part of the Keychange Initiative, which is made up of 74 female artists who are seeking to achieve a 50:50 gender balance in festivals and music organizations.

“Female artists don’t need to be Beyonce or Lady Gaga to be in a headline,” Iskwē said.

“It is such a good thing to be able to interact with the artist,” said Roman Singh, a 19-year-old journalism student. “You get to know more about them and if you like their music, you feel lucky to see and talk to them.”

Before the third performance, Singh expressed her admiration towards the artist and apologized for leaving. “They should arrange more interactive events like this but at the time when students can come and join in,” she said. “I had to come during the short break between classes and wasn’t able to attend for long.”

Iskwē was to perform at the Juno Awards on Sunday, March 15 in Saskatoon. Her performance was going to be a tribute to Colten Boushie and Tina Fontaine who passed away in 2018. She has also been nominated for the best music video of the year for her song, Little Star.