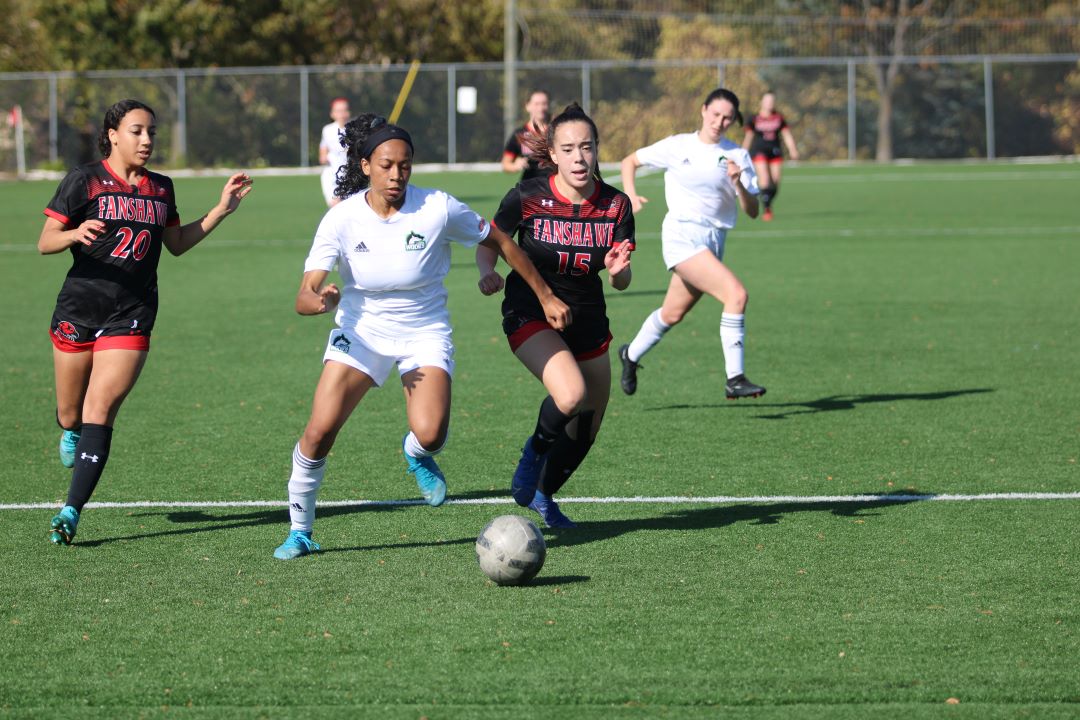 Jordan Blades-McHenry (centre) drives past her defender into the penalty area. She would score to tie the match up at 1 - 1, leading to a Wolves victory. Photo credit: Kolbe Devaux

A three-person bench, a two-goal second half, one called-off game-tying goal and a late yellow card for assistant coach Steve Ball were all parts of the Algonquin Wolves’ 2-1 victory over the Fanshawe Falcons on a cloudless Saturday afternoon.

For the fourth consecutive match, the hosts started with a weakened team as injuries from previous matches meant some players were unavailable for the must-win game.

However, the injury crisis was not the only obstacle the Wolves faced.

“There were a lot of nerves going into it,” said striker Jordan Blades-McHenry. “It was very intimidating not knowing what was going to happen especially because it’s a crossover game. You never know what the (West division) teams are going to be like.”

The Falcons capitalized on the Wolves’ nerves and took the lead in the 22nd minute. It was only the fifth time this season the Wolves conceded first. Makayla Pearl nearly brought the home team level before half time but her 40th minute free kick hit the crossbar, leaving the Wolves trailing at the break.

“We knew in that locker room we really wanted to win this game. We had an advantage playing at home because we’re used to training here and playing here. We knew we had to give it our best and go out on the field and score some goals,” said Blades-McHenry.

The rookie striker, who scored 14 goals in 10 regular season games, found the net just seven minutes after halftime to bring the Wolves back on level terms. Then in the 58th minute, the Falcons failed to clear a corner and Pearl’s shot hit the opposition’s captain and sailed past the goalkeeper, giving the Wolves a 2-1 lead.

The Wolves had a major scare in the 77th minute when the visitors managed to put the ball in the net but the offside flag was raised keeping the score line at 2-1.

For head coach Basil Phillips, the result was more important than the performance.

“It was a tough game,” he said. “That’s a playoff game. They’re scrappy, they’re ugly but you’ve got to find a way to win and we did that today.”

Phillips was particularly pleased with his team’s ability to convert scoring opportunities, a part of the game it has struggled with at times.

“I’m very proud of the team. We didn’t have a good first half but we regrouped and came out better in the second half. We still didn’t create a lot but timely finishing is what makes the difference between end of season and you’re going home or going to Provincials,” he said.

The head coach was full of praise for his squad’s fight in the face of adversity.

“We’ve got injuries all over the place,” he said. “Half the team is injured or playing injured. Today we had a very short bench and even one of them has an injury. But the determination of the team, especially those who started and finished the game, is just huge.”

Saturday’s victory secured the Wolves’ spot in the quarterfinals of the provincials.

“I’m definitely nervous but I’m super excited,” said Blades-McHenry. “I’ve never been to provincials before so it’ll be something new and I’m really excited to do it with this team.”

Blades-McHenry finished the regular season as the top scorer in the league with 14 goals. She only failed to score in two of the 10 matches she played.

Meanwhile, the Wolves’ finished in second place in the Ontario College Athletics Association’s East Division with 22 points from 10 matches. The Wolves won seven matches, lost two and had one draw.

The Wolves play the Niagara Knights on Oct. 27 in Game 4 of the quarterfinals at Vaso’s Field in Oshawa.

The 2022 OCAA women’s soccer championship is being hosted by Durham College.

Meanwhile, the Algonquin College men’s soccer team suffered a 2-1 defeat in its crossover game against the St. Clair Saints to end their season in disappointing fashion.