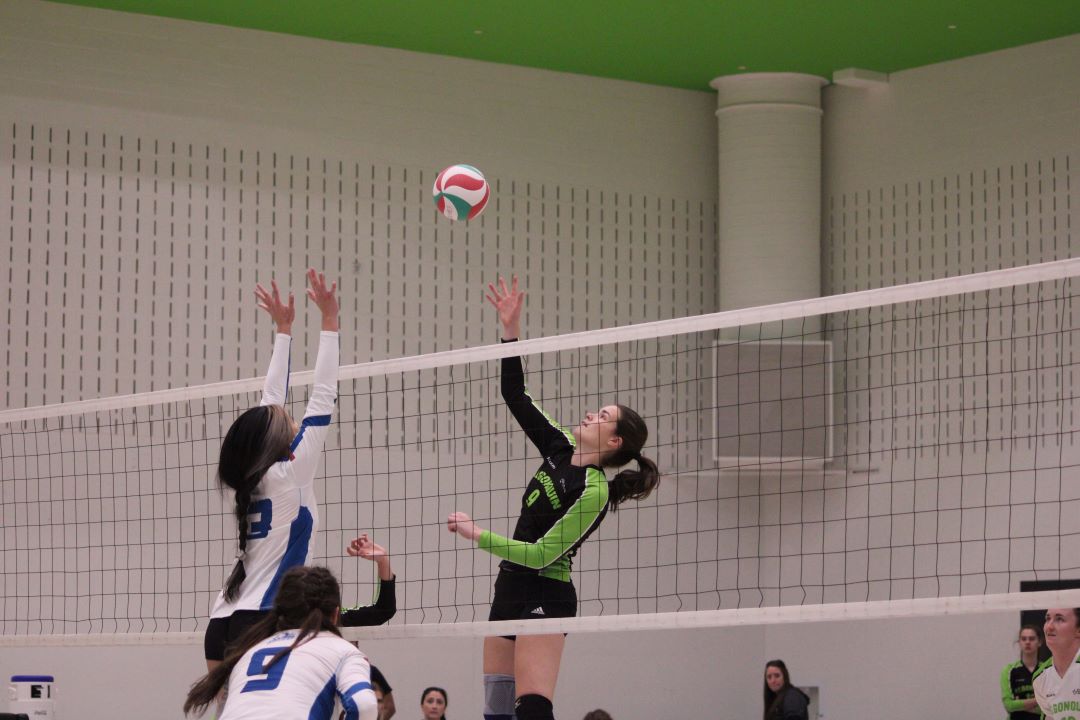 The Algonquin Wolves women’s volleyball team returned to winning ways with a 3-2 win against the George Brown Huskies on Nov. 12.

The Wolves’ resilience was tested after they dropped the first set of the match and their fourth consecutive set, following their defeat to the Durham Lords on the previous day.

However, they would win the next two sets in a similar fashion. Both sets were close as the scores climbed into the teens but the home team made late runs to clinch them both 25-18.

“When you’re playing a team and you’re pretty evenly matched, you know it’s going to be point for point,” said head coach Everton Senior. “We knew it would come down to the end and we preach on making the right decisions. When we’re near the end of a set we don’t want to give away points. We want our opposition to earn their points.”

The Huskies started the fourth set strongly and kept the hosts at arm’s length, claiming the set 25-17 and setting up a deciding set.

For returning player Kristina Renwick, the do-or-die fifth set was not overly daunting because of the team’s previous experiences.

“We’ve had a lot of experience playing fifth sets,” she said. “I know last year we had three games in a row that we went to a fifth set, and came from behind and won so I do think that’s a strong suit of our team and we have an advantage because we’ve played so many.”

The team’s fifth-set experience paid off. With the score at 6-5 in favour of the Wolves, the hosts scored the next eight points. The Huskies scored another point to end their run but the Wolves found the final point to seal the fifth set 15-6 and take the victory.

“We knew going into the fifth set we’d have to get a really fast start and we came out and worked really hard for every point. I’m so proud of my team to just dig in after losing that fourth set and come back and kind of demolish them in the fifth. It was a lot of fun,” said Renwick.

“Yesterday’s result was disappointing but the match wasn’t really disappointing. That’s the number 12 team in Canada and we were right there point for point with them. We were actually happier with the way we played yesterday than we are today. I think we could have been better, but George Brown is a good team and we’re happy to get the win because we’re fighting with them for a position,” said Senior after the match.

The win meant the Wolves’ record moved back above .500 at 4-3 on the season, positioning them in fifth place in the Ontario College Athletics Association’s East Division.