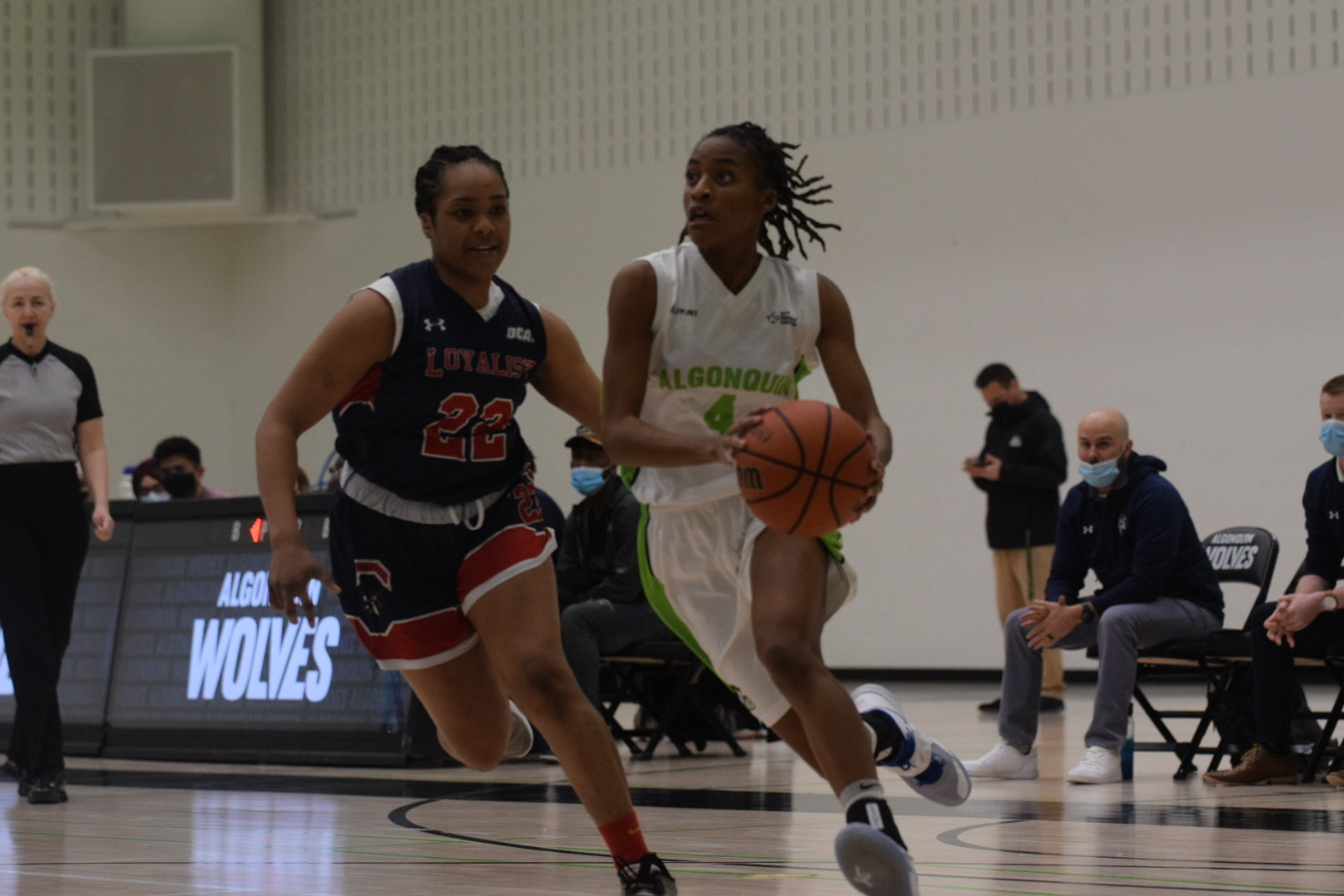 Dasia McDonald drives to the basket for a layup.

Coming off six straight wins, the Algonquin Wolves women’s basketball team beat the short-handed Loyalist Lancers to move onto the second round of playoffs.

Tension filled the air of the Jack Doyle Athletics and Recreation Centre entering the fourth quarter as the Wolves trailed the Lancers 42-39. Coach Jaime McLean was crouched over with his hands on his head, players on the bench were intently watching each play with serious expressions, fans grew progressively quiet as the Lancers rained down threes.

However, after another clutch performance in the closing minutes, however, the Wolves pulled away to win 58-51.

Jaime McLean was pleased with the win but said his team did not play to their full capability.“Reality was that we were not letting ourselves get to what we wanted to in our offense today,” he said.

“Defensively we were there, we just were not communicating, so when breakdowns were happening we were not getting our rotations like we wanted to do.”

Going into the playoffs, the Wolves were 7-1 while the Lancers were 1-7, but regular-season records do not matter in the playoffs aside from home-court advantage as it only takes one loss to be eliminated.

The Lancers were also short on players – only six travelled with the team to Ottawa – and depth got even shorter as a starter when Ali Alexander fouled out in the final quarter.

McLean was impressed by the Lancers effort, despite being significantly short-handed.

“That team is always hard-working, every team in this league is hard-working,” said McLean. “To come out here and compete with six players you got to give them full credit. They worked their butts off and they made things difficult for us today so we had to earn it.”

The Wolves were in steady control of the entire first-half, but a tough third quarter where they were outscored by 11 gave the Lancers the momentum. A big part due to Thesa Pangan who had 22 points and a stellar performance shooting from distance hitting 6-10 of her three-point shots.

But yet again the Wolves showed their resiliency in the fourth-quarter outscoring the Lancers by 10 in the quarter and holding them to nine points.

Moving on, the Wolves will host the Lambton Lions in the quarter finals on Saturday, March 12 at 2 p.m.