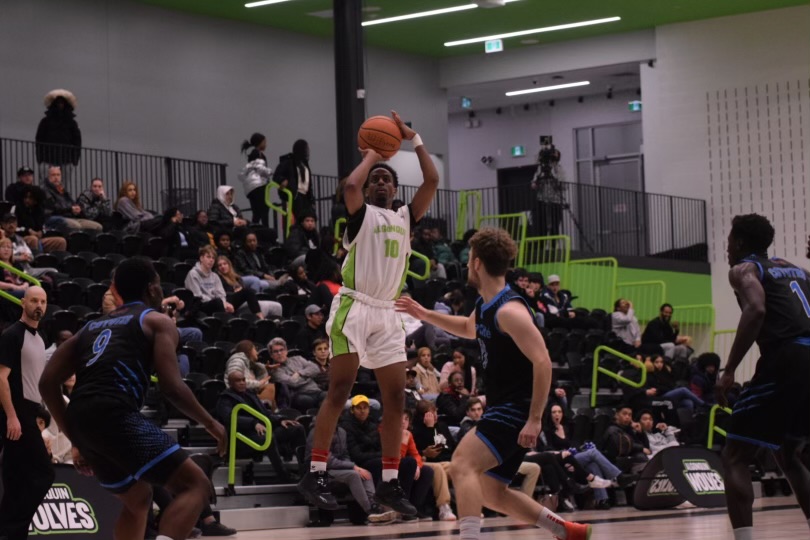 The first half of the basketball season came to a close with the Algonquin Wolves men’s team winning back-to-back games for the first time in nine games.

After snapping their six-game losing streak on the road with a three-point victory over the Fleming Knights, the Wolves carried their momentum against the La Cite Coyotes for an 11-point win on Dec. 2.

The home team opened the scoring and after the Coyotes tied the game at 7-7, the Wolves would lead all the way to the final buzzer.

Head coach Trevor Costello was very pleased with his team’s performances as they entered the mid-season break.

“It feels great,” he said. “It was a must-win because it’s a winless team and we’re in the playoffs right now if the season was to end. We’ve got to keep plugging away and we’ve got to be hanging around because anything can happen in the playoffs.”

Costello showered praise on the defensive effort his team showed as they limited the Coyotes to fewer points for every quarter they played — 21 in first, 19 in the second, 18 in the third and 16 in the fourth.

“The last two weeks have been nothing but defence. I’m usually just offence offence but we’ve been working on defence the last couple weeks and it showed a little bit. We’ve had some glimpses of greatness on our defensive stuff and I know we just have to keep going,” he said.

Even with their focus on defence the Wolves offence performed well. Helped by double-digit performances from four of their starters, the hosts kept the Coyotes at arm’s length throughout the game.

“It’s a good way to end the first half of the season,” said shooting guard Topaz Kana. “I think we did some things well but there’s always a couple things to improve on. I think we haven’t reached our full potential as a team but we are getting there.”

Kana was the Wolves’ best player on the night as he lead the scoring with 26 points, and made seven of his 16 three-point shots.

“I think I played okay tonight. Honestly speaking I don’t feel like I played great. I could’ve played better defensively but I’m just happy that we got through with the win. It’s a good way to end the first half of the season,” said Kana.

The Wolves’ record moved to three games below .500 at 3-6 on the season, moving them up to seventh place in the Ontario Colleges Athletic Association’s East Division.

Following the return of the season, the Wolves will face the Coyotes again on Jan. 11 at 7 p.m. at the La Cite college campus in Ottawa.