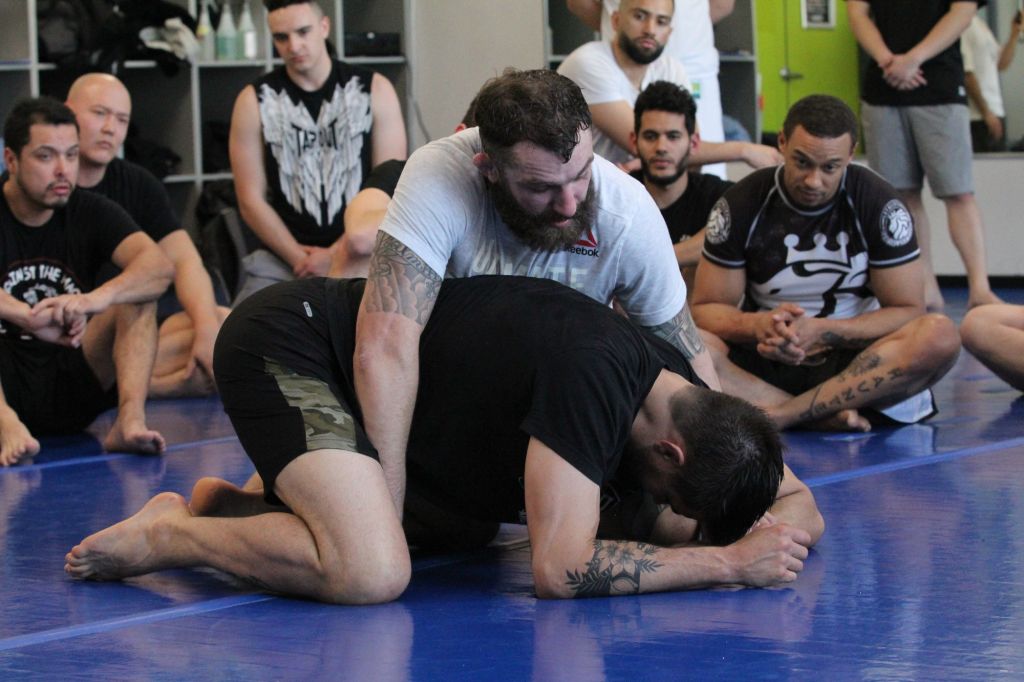 It’s a common drill during a mixed martial arts workshop: attack an opponent in turtle position, reverse it and then progress into a guillotine choke so your adversary will submit.

It’s something you would see in a fight that ends in submission, like Chiesa vs. Condit on Dec. 29, 2018, where Chiesa won in the second round. Only this time, it was happening right here on campus.

Over 20 fans joined the welterweight division fighters to practice jiu-jitsu techniques before gathering in the Observatory for a watch party of UFC 248 later in the evening.

Before the group went in for the session, they discussed some fights they attended and spoke about the last UFC athletes that visited Algonquin College.

One member recalled attending the event where Condit, from Albuquerque, New Mexico, faced Canada’s very own Georges St-Pierre back in 2012 at the Bell Centre in Montreal.

“I attended the event at Algonquin with Rory MacDonald and the one with Demetrious Johnson,” said Vivek Dalal, a 2017 dental hygiene grad.

Dalal follows UFC and is a big fan of both Michael Chiesa and Carlos Condit.

The men brought their expertise as Ultimate Fighting Championship athletes and coached attendees through their techniques while offering feedback and pointers.

“Training is sometimes an escape,” Dalal said. “It helps me to relax, though it’s intense. You’re only focused on what you are doing.”

During his time as an Algonquin student, Dalal worked at the Fitness Zone and started practicing MMA training weekly at the Impact Zone. Though he graduated two years ago, he still comes to the college for training sessions.

“You can keep your membership even after you graduate,” he said. “Anybody, even if they’re not an alumni or a student here, can get a membership for the Fitness Zone and the Impact Zone add-on.”

The Impact Zone is a state-of-the-art MMA gym within the school, open to all registered members. It offers classes in several disciplines such as Brazilian Jiu Jitsu, boxing, Muay Thai, submission wrestling and MMA.

“If you look at all the coaches we have here at the Impact Zone, this is one of the best facilities in Ottawa,” Dalal said.

When the fighters asked who had done jiu-jitsu before, most of the hands in the room went up. They opted for intermediate-to-advanced techniques as their class was filled with people familiar with MMA.

Some members had the opportunity to practice with the UFC stars themselves and took to social media to thank them for “sharpening their ground game and teaching many new techniques.”

Ahmed Taher, a mixed martial arts enthusiast and civil engineer, posted a picture of himself with Condit and Chiesa on Instagram and thanked them for sharing their knowledge with him in the Impact Zone that day.

Walking into the Impact Zone, Michael Chiesa mentioned how great it was for students to have access to such a facility.