Senior players pause for celebration before Thunder strikes the playoffs 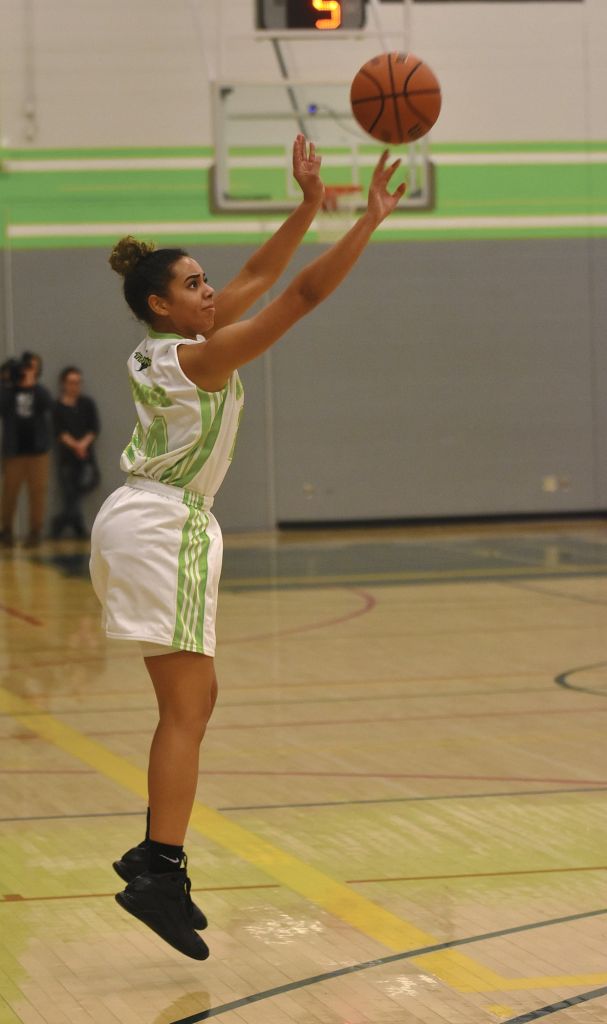 As fifth-year guard Michaela Branker was introduced onto the court for the Thunder’s second-to-last home game on Feb. 21, fans who’d packed the bleachers erupted into cheers and began chanting her name.

Branker’s coach, Jaime McLean, grabbed the mic to say a few words about her and her four teammates who are finishing their basketball careers at Algonquin this season.

“Michaela joined us as a post-grad this year and almost instantaneously made an impact on our team and coaching staff,” Mclean said, before the team took the court against the St. Lawrence Vikings.

Sylvie Strong, Rita Sibo, Jody Gerus and Sierra Peck received framed photos, along with Branker, as a farewell and thank you from the coaching staff.

In the crowd, Peter and Denice Branker sat with Michaela’s friends from Nipissing University, where she played for four years. Both her parents have attended every one of her games. They had mixed emotions about seeing their daughter play for one of the last times.

“We’ve been watching her play since she was about seven or eight,” said Branker’s father. “She’s been playing a long time.”

Her parents cheered her on as Branker helped the Thunder get a 93-46 win over the Vikings with 20 points while shooting 70 per cent from the field.

Fellow senior and guard, Sibo, also had 20 points and was one rebound away from a triple-double.

As applause met the final buzzer, Branker huddled with her teammates, most of whom she met at the beginning of the season.

“I came in here not really knowing anybody,” she explained. “I kind of just knew of people. So, I was able to build some really cool friendships this year.”

While playing in her fifth and final year is sad, she says the friendships she’s made is what she’ll miss the most.

“I know I’ll still see the girls around,” she said. “But we see each other, literally, every single day so it’s going to be hard going from seeing each other everyday to every now and again.”

After the final buzzer, the team headed over to the bleachers where a young girls’ basketball team waited to get their pictures taken with the Thunder.

The moment brought a smile to Denice Branker’s face. “Just seeing the little girl’s team come out, that’s huge because they look up to these girls as role models and I think that’s what it’s all about,” she said.

Peter Branker agrees. “The big thing is the support that they get from the community,” he said. “The amount of people that come out for the girls’ games is incredible.”

As for Branker, the idea of chasing a life-long dream involving basketball is still up in the air.

“I’ve been kind of up and down with the possibility of going pro,” she said. “I definitely wouldn’t go next year. I think I would take a year off, kind of train a little bit more if that’s something that I do.”

With a near perfect regular season record of 15-1 behind them, the Thunder will play their first playoff game on Feb. 29 as they host a crossover match with tip-off time and opponent to be determined.