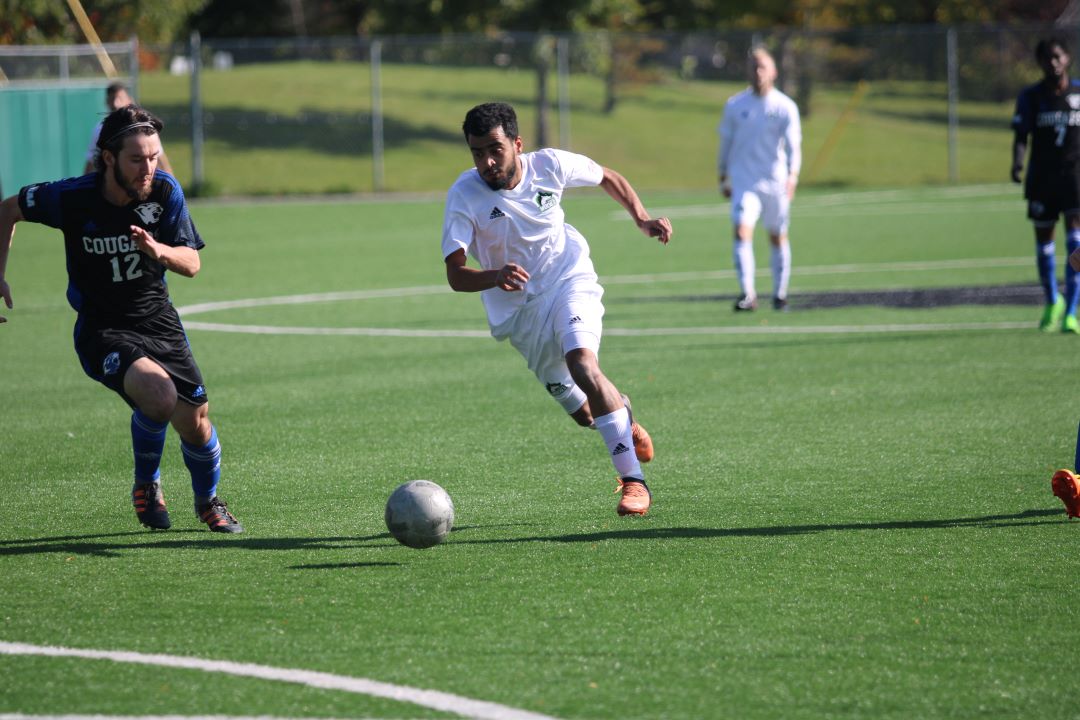 The Algonquin College men’s soccer team bounced back in a big way after suffering consecutive defeats on its most recent road trip.

The Sault Cougars played the majority of Saturday’s match with only nine men and were put to the sword by the Wolves who claimed their sixth win after the 13 – 0 victory.

The Wolves started like a house on fire against the shorthanded Cougars and took the lead through Oscar Forward’s incredible effort in the sixth minute. The midfielder carried the ball just past the centre circle, struck a long-range shot that hit the bottom of the crossbar and bounced in.

Connor David made it 3 – 0 in the 29th minute, and Aviles-Molina made it 4 – 0 with his second goal in the 34th minute. Mecheri Mohammed scored the Wolves’ fifth in the 36th minute before Forward capped off the half with another stunning goal in the 43rd minute to make the score at half time 6 – 0.

“We came here with the goal to get as many goals as we could,” said Aviles-Molina. “Our opponents were two men down today, which is unfortunate for them but a blessing for us because we could score as many as we could.”

The central attacking midfielder completed his hat trick in the 49th minute, Mohammed found his second in the 54th minute before the diminutive Aviles-Molina scored his fourth and fifth in the 63rd and 64th minutes, making the score 10 – 0.

Second-half substitute Benaiah Tesfaye made it 11 – 0 in the 68th minute, Jawad Beiram scored the Wolves’ twelfth of the day six minutes later and Ahmed Mohsen completed the 13 – 0 rout when his 83rd minute shot was deflected in off a Cougars defender.

“Today was like a training session and obviously we’ve got a tougher opponent coming up. So we start again with training on Monday and we’re back for Saturday’s match,” said Aviles-Molina, whose five goals took him to joint eighth in the scoring chart.

Head coach Angus Wong was critical of the opponents but reiterated his player’s sentiments.

“It’s disappointing to see Sault College come with only 10 players,” he said. “It’s hard for the guys to really be engaged in a game like that so I’m glad they came in, scored a lot of goals and tried to work on things that we’ve been training on. The mindset of the staff was to use it almost like a training game in preparation for tougher teams ahead.”

Despite suffering difficult defeats during their last trip to Toronto, Wong believes his team will only benefit.

“I think we learned some things in the Toronto trip. We learned that there’s quality in the OCAA and we saw where we need to be so we can compete with the best teams in the league. I think we realized that we can compete and we can beat both of the teams [George Brown Huskies and Seneca Sting] we played in Toronto,” he said.

As his team prepares for its final game before the playoffs, the head coach has full confidence in the group.

“We really need to go in with a lot of belief. I think if we play as a unit we can beat anyone in the league that we’ve seen so far,” said Wong.

The Wolves next play the Durham Knights on Saturday at 6:00 p.m. at the Algonquin College Students’ Association Sports Field.