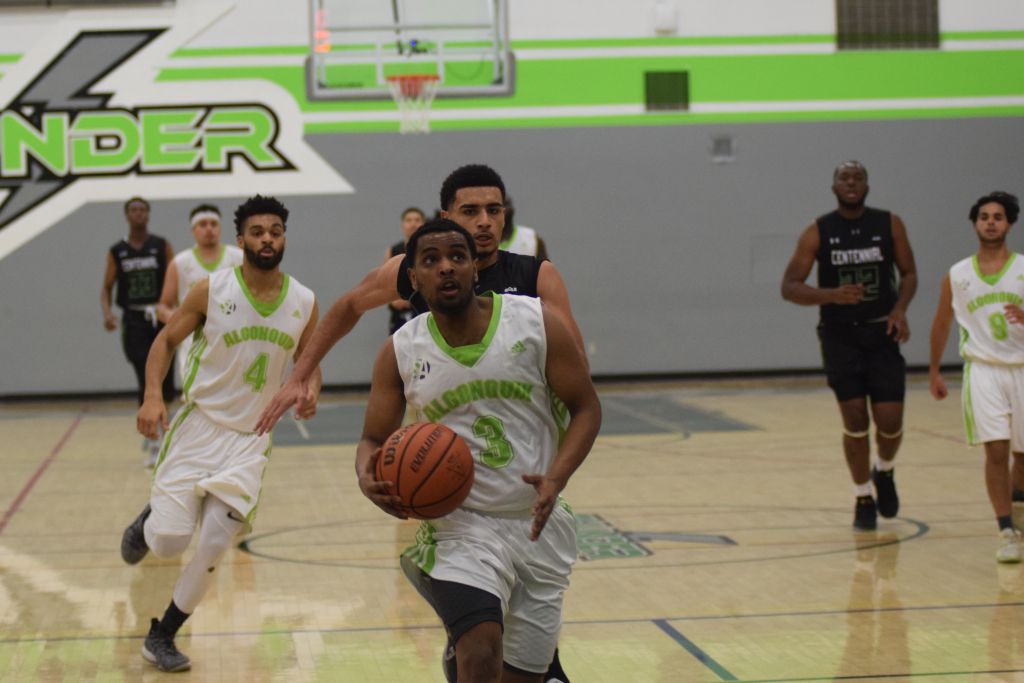 After a tough past weekend for the Algonquin Thunder men’s basketball, the team grabbed the win against the Centennial Colts on Saturday night with a score of 80-75.

Zerious Loney and Simon Desta led the team with 16 points at the half, with the Thunder up 39-29 when the buzzer sounded.

While scoring was a key factor, Loney applauded his team’s ball movement in the dominant first half.

“We moved the ball really well, we played as a team,” said Loney. “It all started in practice, we ran a lot and people really executed today.”

The second half saw the Centennial Colts try to make a comeback, but the Thunder stuck with them through their surge, which was eventually halted.

The Thunder’s ramped up efforts on the court inevitably resulted in making Centennial turn over the ball in the second half.

For the Thunder, it was about simplifying their game and getting the shots along with staying hungry. In his post-game comments, Loney said this was key to the final result.

“You get inside looks, you get the open looks, hit the open jump shots and stay aggressive,” said Loney.

While the defensive play worked out in the end for the Thunder, it was a change in strategy from the coaching staff that sparked the aggressive play off the ball.

“It’s just something different, control the tempo and see what they could get do out of it,” said Costello. “We got a quick steal, quick and one right after that. We kind of stuck with it a little bit. We tried to mix it up a little bit more tonight with some zone and some half court trapping.”

While the playoffs seem far away for the Thunder, a win on Saturday night brings them up to a 3-11 record in the OCAA men’s basketball east division.

The team now prepares for another weekend on the road as they are set to play against George Brown College, with a tip-off time set for 8 p.m.