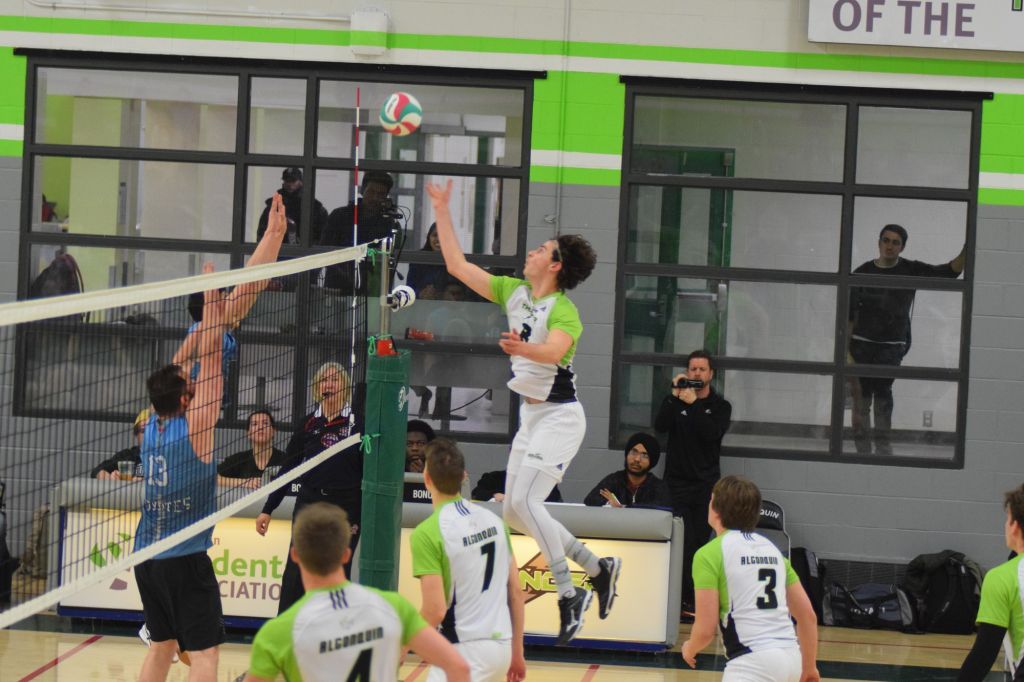 Tom Cullingworth soars to tip the volleyball over the net during Friday night's game versus the La Cite Coyotes. Photo credit: Kened Sadiku

The Algonquin Thunder men’s volleyball went on to defeat the La Cité Coyotes in what was their last home game of the season with a final score of 3-0 on Friday night.

Similar to last home game, Tom Cullingworth again put on a performance with a team- leading 12 kills during the night. Connor Warnholtz was second with six on the night.

While Algonquin went on to sweep La Cité, head coach Jelle Kooijman liked the way his team battled when La Cité put on the pressure.

“It was really just execution on our side,” said Kooijman. “On the bench, we used the word ‘complacency’ in the first set where we’re just not pushing ourselves.”

The second and third set saw a whole different game from the Thunder, one where Kooijman liked a lot more from his side.

“We did a lot of a better job in the second and third set,” said Kooijman. “We were able to cruise towards the end. Overall, it was a positive night.”

The win on Friday night got the Thunder to a 10-7 record. The team has one more regular season game next Saturday against the Loyalist Lancers to close out the season.

Although next weekend will cap off the regular season, Kooijman is confident that the team will continue following the message they have since day one.

Richard Bucar, right side forward, shared his thoughts about Friday’s game and what he thought his team did well on the offensive side.

“We knew we were the more efficient team, and just to get our serves in and stay really aggressive on the serving,” said Bucar.

Much like his head coach, Jelle Kooijman, Bucar shares the same ideology heading into next weekend’s final regular season game for the Thunder.

While the action from home court has come to an end, the Thunder still have one big game next weekend before they move onto the next stages.

Start time for next weekend’s game is set for 3 p.m.