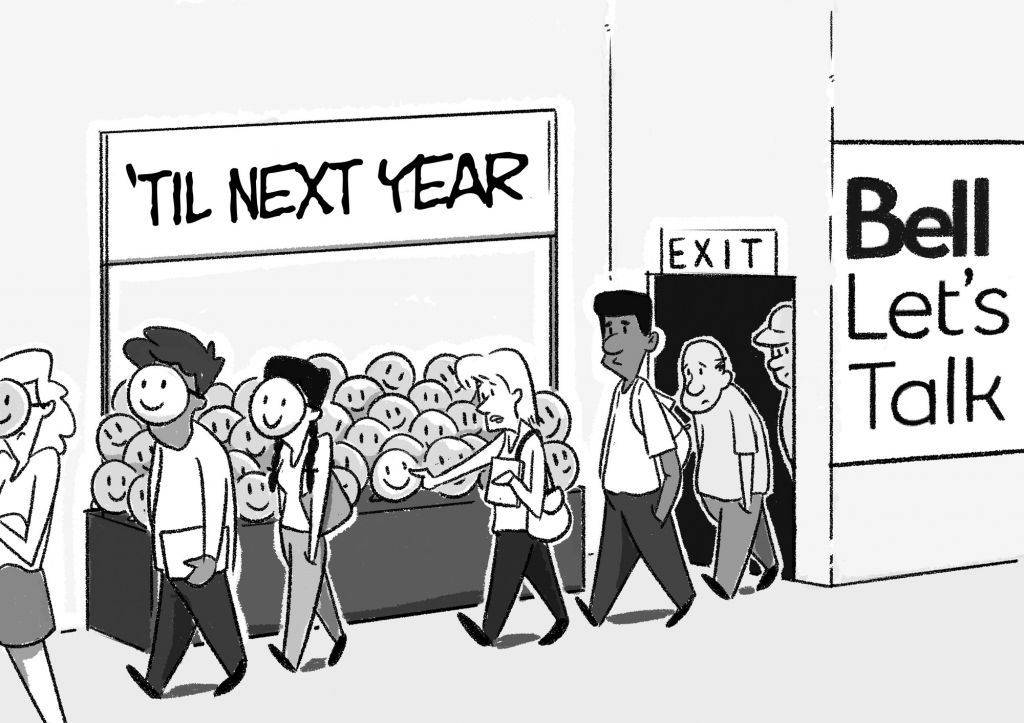 Bell Let’s Talk Day has come and gone – and it will be forgotten for another 11 months.

Breaking the stigma around mental health is not something that can be done in a day. It’s a constant struggle that we have to work at year-round.

Designating one day to try to raise awareness around mental health isn’t enough because people struggle with mental illness everyday, not just one.

Bell Let’s Talk is an awareness campaign that was created in January 2011 by Bell to open conversations around mental health. The goal was to reduce the stigma that stops people from seeking help to overcome their mental illness. After the most recent Bell Let’s Talk Day on January 29, Bell has donated a total of $108,415,135 to various mental health programs.

The event has done a lot to get people talking about mental illness, which is a crucial first step – but it’s not enough.

Every year, after Bell Let’s Talk Day, people move on from trying to raise awareness about mental illness and into the next thing in their life. But people still struggle after that day. People afflicted by mental illness may feel supported for a few days, but will they still feel that way a few months later?

Solving the complex issues surrounding mental illness can’t be done in one day. Building upon the momentum that Bell Let’s Talk Day creates, however, could be useful. It could push us all to take action.

This would mean that we need to continue to have open conversations about mental health and reach out to those who could be struggling on their own.

Starting conversations about mental health is a crucial first step in breaking stigma and helping people recover. But it is only the first step. People dealing with mental illness need more than just our support, they need treatment.

We need to collectively push for consistent, readily available and reliable treatment for those who need it. Some treatment options include low-cost therapy, psychotherapy and medication.

There is still stigma surrounding these resources that keeps people from seeking the help they need. To break down this stigma, people need to know that it’s okay not to be okay, and that it will get better if they seek help.

People struggling with a mental illness need to know that they are not alone, no matter what time of the year it is. We can’t forget about these people – our friends, family members, classmates and neighbours – until Bell reminds us.

If we really want to help people struggling with mental illness, then we need to recognize that we can’t do it in one day. And we can’t do it without taking action. Raising awareness around mental health, breaking down stigma and ensuring that people have access to treatment is not easy.

We need to fight mental illness everyday of the year, not just one out of 365.