Wolfie: The unmoving protector of the Mamidosewin Centre 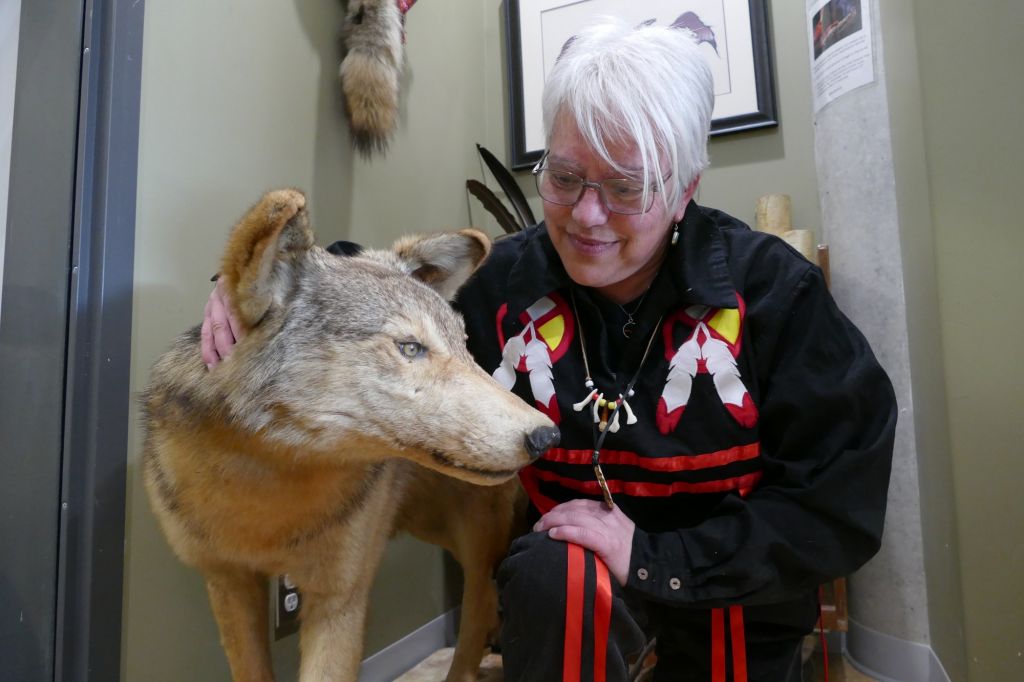 Raven Brightmoon smiles as she pets the stuffed wolf that stands in the Mamidosewin Centre. Brightmoon was the owner of the wolf for 20 years, and described it as her protector in times of hardship. Photo credit: Emily Hsueh

It stands on legs that don’t move in the corner of the room. It watches students come and go with eyes that don’t see.

And yet, the grey wolf stands in the Mamidosewin Centre in the college’s E-building, has been dead for at least 20 years, which is how long Hélène Choiniere, 56, who goes by Raven Brightmoon, has had it.

But it has served a mighty purpose for Raven long after its death.

In 1995, she attended a spiritual gathering in Maniwaki, a small town to the northwest of Montreal. She stopped by a store — whose name has since faded from memory — and laid eyes upon an animal she had never met before, but played a large part in her life.

“The first time that I saw [the stuffed wolf], it was like the wolf in my dreams that came to help me when I was having nightmares as a kid. That wolf would come and protect me,” said Raven. “It was mainly me being in the woods, and I had been abandoned and I was scared. The wolf would come and just comfort me.”

It took her three years to get the stuffed wolf, which she called “Wolfie.” She was finally able to purchase it in 1997. The taxidermy wolf initially had a trap stuck to its paw, and the first thing Raven did was remove the trap as to offer Wolfie freedom again.

Having the wolf in her home elicited many reactions from visitors.

“I had all kinds of comments,” Raven recalled. “I’ve had people running out of the house when they saw it, I’ve seen people people attracted to it. I had a friend that I had to cover the wolf when she was at the home because she couldn’t stand a stuffed animal.”

The wolf stood guard in Raven’s house for the next 20 years, giving her protection and companionship. Eventually, she decided to move to a smaller home with her husky, meaning Wolfie would no longer fit. Raven decided it was best to give her longtime protector away, but space was not her only motivator.

“The main reason is because I wanted more people to share the wolf than just me. I wanted to have other people enjoy Wolfie. The wolf is protection, it’s family, it’s the teacher.”

Wolfie moved into the Mamidosewin Centre at the beginning of the 2018 – 2019 academic year. It was brought to the college by Audrey-Claire Lawrence, a member of the college’s Board of Governors.

Jackie Tenute, the Aboriginal counsellor at the centre, confirmed that Raven’s wish for Wolfie had come true.

“It has been good having it here, people seem to love it,” Tenute said, adding that visitors always treat it with respect. The counsellor has affectionately called the wolf “Nimkii Mhiingan,” which means Thunder Wolf; a nod to Algonquin’s mascot, the Thunder, represented by a wolf.

“It was hard because I was losing some of my protection,” Raven said of donating Wolfie. But she has not lost all connection to her guardian.