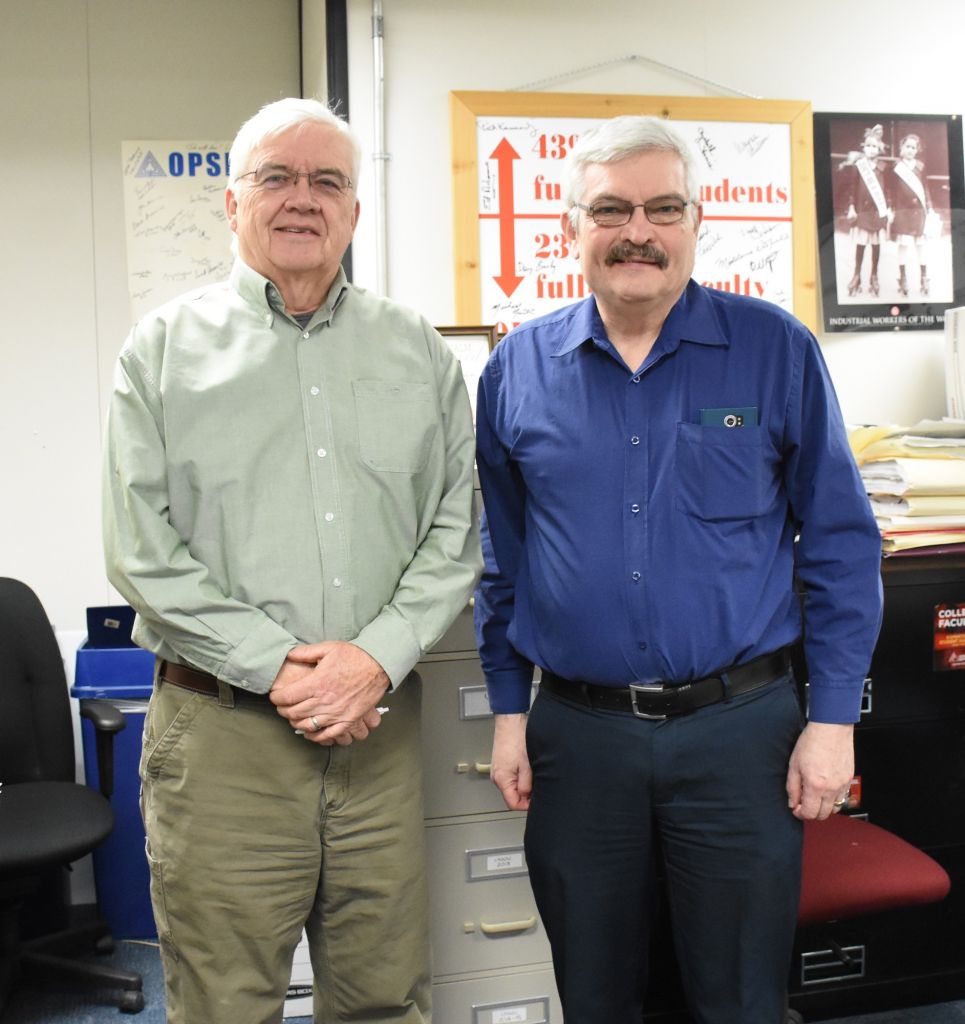 Pat Kennedy, left, and David Haley. They are the president and vice president of Union Local 415. Photo credit: Jessica Alberga

The college’s faculty union has filed a grievance against the college over the latest phishing controversy.

With the number of phishing attacks becoming more public surrounding the college, Pat Kennedy, president of Union Local 415 stressed that waiting to take action would do their members a disservice.

“Under the collective agreement, we want to protect our members now and in the future related to this. I’m not confident that two years down the road, someone’s SIN number won’t be used for some other reason.

“We’re obligated, once we become aware of what we would say are practices contrary to the collective agreement, that we have to take action and that’s what we’re doing,” said Kennedy.

The collective agreement has been in effect from Oct. 1, 2017 to Sept. 30, 2021. A policy grievance is a formal process stating the violation of the agreement between the union, its members and the college.

The policy grievance covers not only the violation in the agreement, but it also details the violation of the Freedom of Information and Protected Privacy Act.

“Under that act, which is part of our collective agreement, employers have a responsibility to provide a reasonable amount of security for personal information.

“With the types of information the college needs from us to put on Workday, such as: banking information, addresses, and most importantly SIN information, we have little confidence when they say this one has been accessed, but this [information] ‘no way’, we’re not entirely convinced,” said chief steward J.P Lamarche.

Ontario Public Service Employees Union, (OPSEU) now formally controls the policy grievance. The college has 15 days from first receiving the grievance to arrange a meeting with employees, a union steward and an additional representative designated by the union local, if requested.

“We file but it’s in the control of OPSEU; they now have it. We want to be clear we’re not alarming anybody because this is after the fact. We don’t have a lot of information, but we’re not confident with oral assurances,” Kennedy stated.

The current level of communications surrounding this issue could be potentially be building more barriers rather than trust between Algonquin and its faculty, the union feels.

“The most frustrating thing we’re hearing from faculty is the lack of communication with the college. Not only the college in general, but there’s been very little communication about what’s going on and when we can expect things to be up and running. Some of us still can’t access email,” Lamarche said.

During a media availability visit with journalism students on March 7, president Cheryl Jensen admitted to having no knowledge of the union filing a policy grievance.

However, when it came to the computers affected by the phishing scam, she was sure those devices were thoroughly cleaned.

“Oh yeah, I know for certain we’re wiping it. Our IT folks are cleaning those computers completely. And if they can’t do it, we’re sending them out to be cleaned.”

Doug Wotherspoon, vice president of innovation and strategy, also had no previous knowledge of the union local’s policy grievance filing during an interview on March 8.

“We’ve said it all at the town hall. Everybody that has been impacted has been informed. If they haven’t reported it and used a personal computer then I can’t know.

“So if for anyone that hasn’t told us that they clicked on the link and has a personal computer, I don’t know about it yet. But everyone else, yes,” said Wotherspoon.

If there is not a satisfactory agreement from all involved parties, the grievance moves to a third party arbitrator.

“Depending on what we find out we may have to take further action, and maybe we won’t,” said Kennedy.

“It’s not to say that you never get breached. We’re talking; okay it’s taken place, so now how do we protect our members? It’s pretty basic stuff that we’re asking for; as an employee it’s not a high expectation from our employer.”

The college’s faculty union has filed a grievance against the college over the latest phishing controversy. With the number of phishing attacks becoming more public surrounding the college, Pat Kennedy, president of Union Local 415 stressed that waiting to take action would do their members a disservice. “Under the collective agreement, we want to protect […]

The college’s faculty union has filed a grievance against the college over the latest phishing controversy. With the number of phishing attacks becoming more public surrounding the college, Pat Kennedy, president of Union Local 415 stressed that waiting to take action would do their members a disservice. “Under the collective agreement, we want to protect […]