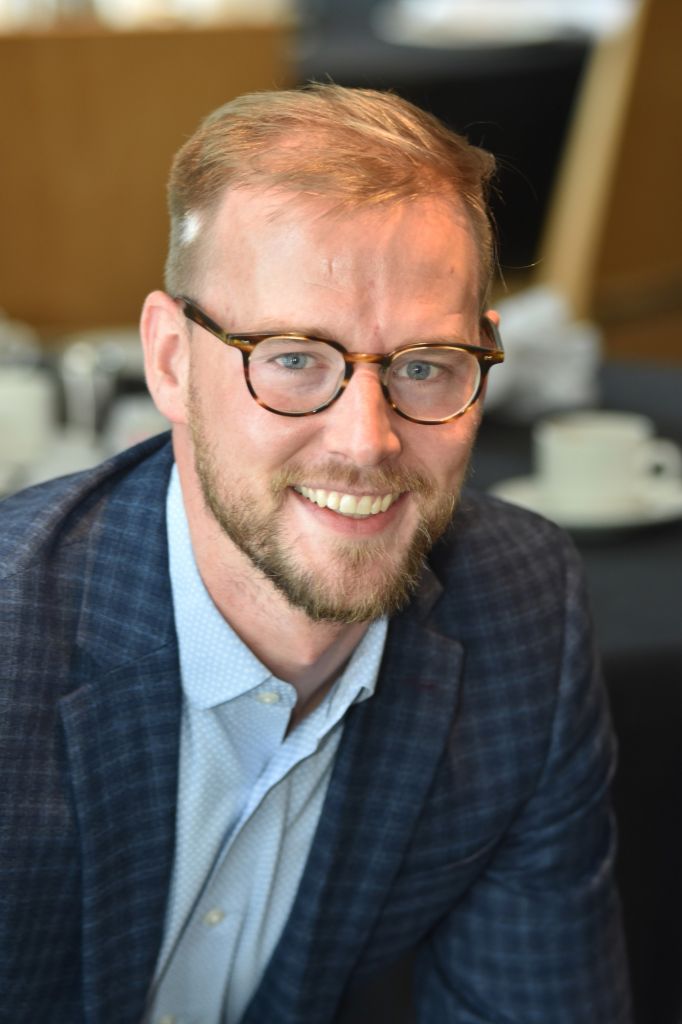 Peter Cleary, guest speaker at Algonquin's Future of Health and Wellness Speaker Series, says students should seize the opportunity to network at these types of events. Photo credit: Katelin Belliveau

Small, white name tags that read “President,” “CEO,” “Stakeholder” and “Doctor,” were stuck to blazers and shirts on Friday morning as some of the biggest names in Ontario’s health industry attended a breakfast prepared by Algonquin’s culinary students.

The crowd, gathered for the Future of Health and Wellness Speaker series, shuffled into the dimly lit Restaurant International in H-Building at 7:30 a.m. to find a seat among the packed round tables. This event has been held since 2016.

As seats filled, the estimated 100 registered guests took the opportunity do some networking. Among them, however, there was something missing. Despite the fact that the event’s invitation was open to students, none were present – something that has become typical of these events.

A podium stood in front of a green Algonquin College banner and greeted the Claude Brulé, the president of the college. The crowd hushed.

Brulé welcomed guests to the event, “where we share ideas, we spark conversations and we discuss matters of relevance.”

Bruyère – an internationally renowned health organization and the series’ first-time sponsor – was represented by, Peggy Taillon, the president of the Bruyère Foundation. She introduced what would be the on-going theme of the morning: change.

“You actually have to be really adaptable because the one thing that’s constant and the one thing you can count on is change in healthcare, change in society,” she said.

The crowd kept their eyes glued to telling graphs as topics bounced from changes in pharmacare and Cannabis 2.0 to telemedicine and hallway medicine.

After a short Q-and-A, both guest speakers were quick to point-out a missing element to the event: the lack of students.

Michael Qaqish, Algonquin’s government and stakeholder relation advisor, explained that students are not typically the demographic of these events, but are always welcome.

Peter Cleary saw this event as more than a speaker series. He saw it as a rare opportunity for students entering the healthcare industry.

“In a crowd like this, you meet every single person involved in the actual delivery of healthcare in Ottawa,” he said. “An event like this is a job fair for the person that is willing to put themselves out there.”

Patrick Nelson agreed and spoke at length about the role institutions – such as Algonquin – play in shaping the healthcare system.

“When we want to change a system that’s largely reliant on people, it has to start, eventually, with the education of those people,” he said. “I would be quite supportive of finding more engagement from students for sure.”

Before the name tags were removed around 9 a.m., Brulé encouraged guests to continue the conversation online by using hashtag ACHLE and hashtag ONHealth.

The next event of the series is set for March 6, and will include new guest speakers.