Sommelier program faculty and students get creative learning at home 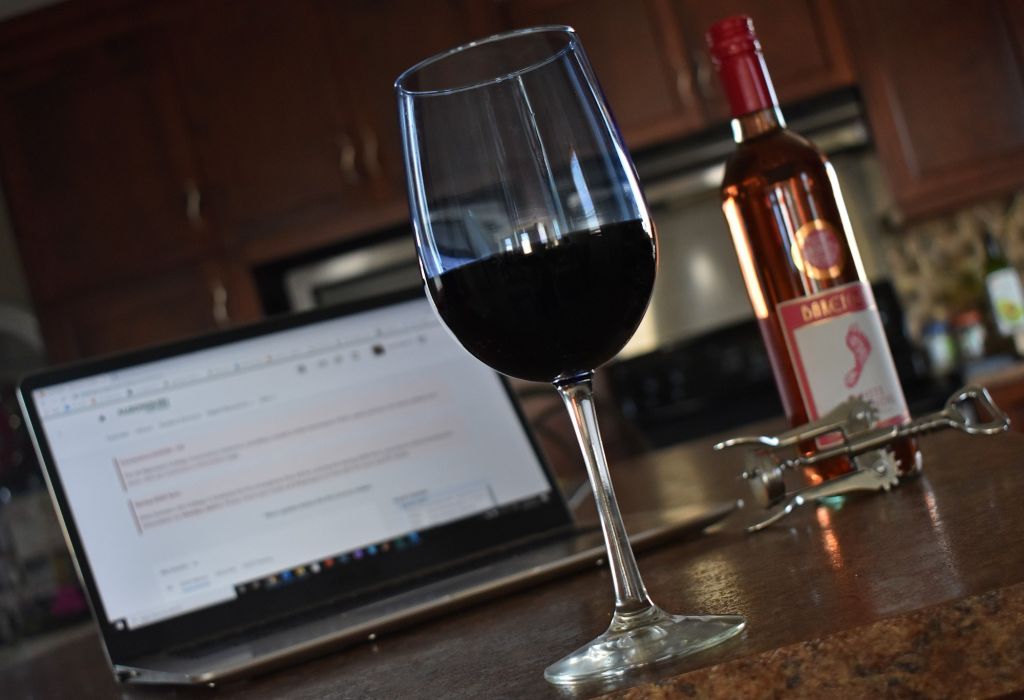 In a new, bright lab at Algonquin’s Woodroffe campus, a detailed mural of a vineyard rolling over sunny hills spans almost an entire wall. Students of the sommelier program normally join there for a year of sampling, swirling and sipping, getting the chance to become well-rounded wine stewards.

Now, the mural has gone dark and the lab’s doors are closed. The 28-year-old program has seen its fair share of changes, but its latest has come from COVID-19.

The college’s measures to stop the spread of the pandemic included shutting its doors and shifting its classes online March 23. The sommelier program has been no exception – even with its hands-on learning approach.

Program coordinator of the sommelier and bartending programs, Marie-France Champagne, said students have been positive about the shift, but have had to get creative at home.

“Out of the three hours, we’re going to be tasting [wine] for at least an hour of that,” Champagne explained about their usual in-class meetings. “So, it’s always a combination of lectures and tasting. There is not a class where we don’t taste wine.”

Champagne said luckily students are far enough into their year to have tasted an impressive amount of different wines. They have become familiar with textures, tastes and structures and can use that knowledge to have virtual discussions for the remainder of the term.

“They have the knowledge of the different varietals to say, ‘okay, we’re talking about New Zealand this week’ and you know, the big wine in New Zealand is Sauvignon Blanc,” she said. “It’s fun to now incorporate some of that knowledge and say, ‘let’s talk about what this wine should and would taste and smell like.’”

While students complete 15 courses, the program has only been offered full-time since 2017.

Liam Doody, a professor teaching courses in old world wines and wine and food, completed the program in 1993 when “there were only four classes you had to take.” In an email, he said he is impressed at how involved the program is today.

“We have a very close relationship with the industry,” Champagne explained. “We have a program advisory committee that we listen very closely to, and we’ve made changes over the years to really meet the demands of the industry.”

Champagne explained that, because the program is so well-rounded, students get careers in vineyards, liquor stores and restaurants and become consultants, wine agents and winemakers.

The program helped Doody get a job as a consultant at LCBO after he graduated. He said he now enjoys being a part of a program filled with experts in their field.

“I like how everyone who is an instructor in the program works in the wine business, either at retail or in sales or in hospitality or even in production,” Doody explained. “There is an incredible amount of experience and knowledge in the team here.”

Tim Ouellette is also part of that team. He is the professor of a nationally recognized certification in the program, the Wine and Spirit Education Trust (WSET) Level 2 in Spirits. WSET is a non-profit organization and awarding body that offers wine and spirit enthusiasts eight different qualifications in over 72 countries. Ouellette’s class is one of the two WSET certifications students receive through the program, along with WSET Level 2 in wines.

Ouellette’s passion for wine grew from his first experience at a make-your-own-wine shop when he was 19, to taking WSET Level 2 and making an immediate mark on his instructors there. “The teacher actually singled me out and told me that I should keep going,” he said in an email. “Having already worked in the industry six or seven years I already knew a lot of the information.”

The next year, he took WSET Level 3 and started the diploma program. “The WSET Diploma was a big jump; it takes two years assuming you pass everything first try,” which is not common, Ouellette added. He graduated “without a hitch” in 2019, but said the class’ failure rate was very high.

Later, he was hired by Champagne to pass-on his knowledge at Algonquin. “After a few interviews I was hired on to teach the WSET 2 in Spirits, and my students did very well, no one failed,” he said.

Until he teaches the class again in the fall, Ouellette continues to work as a product consultant at LCBO in Ottawa, where he has been for over a year.

As LCBO has been deemed an essential service during the pandemic and currently remains open to the public, Ouellette explained that business is booming.

“Wine has been through the ‘Medieval warm period,’ the ‘Little Ice Age,’ Phylloxera, World War 2 and many other things,” said Ouellette. “It’s as close to a sure thing as you can get.”

While people are continuing to clear shelves, Ouellette said a phenomenon in the industry has changed. “An important trend in the wine and spirits market in more affluent nations is something called premiumization. “People are buying less alcohol but are spending more,” he explained. “So higher quality products are being purchased.”

However, financial challenges brought-on by COVID-19 have been changing this trend. “People drink higher quality wine in good times and lower quality wine in bad times,” Ouellette said. “I noticed when the issues started getting serious here with the virus, people were buying high end wines, but once it became worse, they started to prioritize quantity.”

While some areas such as restaurants struggle during this time, other common career paths for grads are getting a chance to thrive.

Champagne explained that, as a result of people staying home, wine agents are getting more business. “It’s a good opportunity for wine agents though, which is a good outlet for graduates coming out of the program,” she explained. “So, consignment wines and wine agents can deliver directly to your home for those not wanting to go to the LCBO.”

For grads that are hoping to, or are currently, working in vineyards, springtime usually means grapes begin to bud and vines must be chopped, tied and prepared to make wine. Champagne said there may be issues with the harvest if the impacts of COVID-19 continue to escalate.

“For the Ontario wine industry, there’s a lot of foreign workers that come and do these tasks,” she said. “And right now, they can’t get in, so the government is looking at what’s going to be done.” Grapes have a short, two to three-week period during which they are ripe, after which they cannot be used depending on the wine being made.

Although some aspects of the industry remain uncertain for now, Champagne is focused on keeping her students safe. “My message to everybody is please stay home,” she said. “Don’t go anywhere if you don’t have to.”

Once this year’s group of sommelier students graduate, Champagne hopes to continue to find grads all over the city, working in what they are passionate about.

“We always say we like to see an Algonquin graduate in every trade and every restaurant,” she said. “So that’s what I want to continue to see, I want to see our grads out there.”