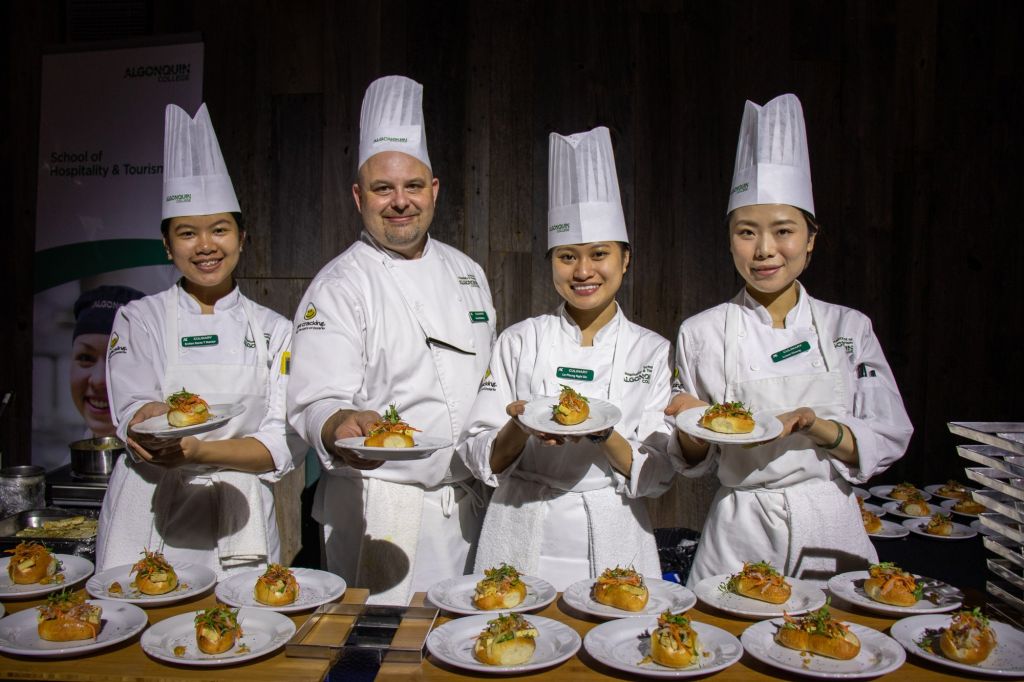 Grant Buttrey had never participated in such an event before, and was thrilled to be part of the team. “You see these kinds of competitions on TV and it’s exciting to actually be a part of it,” said Buttrey, while chopping cucumbers during prep. “There are great chefs, and it’s a great opportunity for learning.”

In their striking white attire, the chefs served numerous attendees as they flocked to the table to try the chefs’ Vietnamese sandwich. The team worked efficiently as a unit and avoided the long waits that the other competitors experienced at their booths.

“I found it extremely flavourful, very authentic and subtly complex. They are on are par 1,000 per cent,” said Eileen Mlikan, a guest who was incredibly enthusiastic about the college’s team.

The student chefs, along with their professors Chefs Cory Haskins and Scott Warrick, spent nine hours over the course of two days to prepare for the big night.

“It’s a student team, so everybody is involved in putting it together, which is great,” said Chef Haskins. “All of these students are in Chef Warrick’s class, and they were chosen on their involvement in volunteer activities, willingness to assist and hard work and dedication.”

“We need to serve 225 portions quickly,” Haskins added. “We need to serve it under strict conditions. We can have one burner, there is no oven. It’s like an outside-catered event, we have very limited capabilities there.”

Despite the challenge, the team was well-prepared and welcomed with open arms, as Hopewell chair and volunteer president Andrew Jones said.

“Through members of our volunteer organizing committee […] we knew of the Algonquin School of Hospitality and Tourism and the program, and we decided it would be a great addition to our evening to invite them as one of our teams,” said Jones. “We’re happy to have them back and I would expect that they’re going to be a permanent fixture.”

Following the competition, Nghi Do couldn’t help but smile as the Algonquin team held up their People’s Choice certificate.

“I feel so proud of myself and my team,” she said. “I don’t have a lot of experience but this competition has made me more confident.”

“These guys did an excellent job,” said Chef Haskins with pride. “They were organized, their service was really really good, their work today and yesterday was fantastic. They were just excellent.”