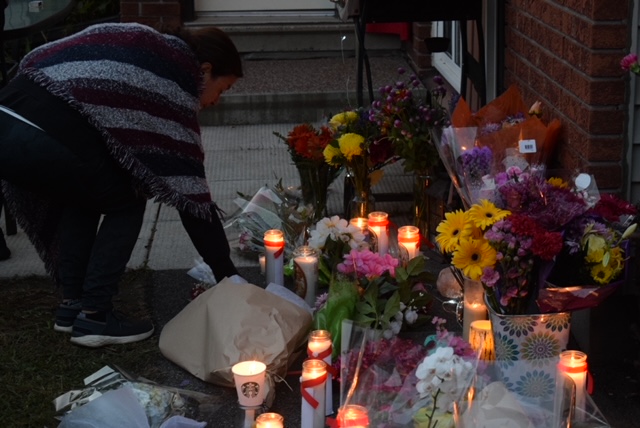 Hundreds of people gathered at a candlelight vigil to grieve the death of a new Algonquin College student. Photo credit: Liam Fox

When Savanna Pikuyak first arrived in Ottawa, moving away from her home in the small Inuit hamlet of Sanirajak, Nunavut at age 22, she was looking forward to beginning her education at Algonquin College in the pre-health sciences pathway program and working to fulfill her aspiration of being a nurse.

She moved into her rental room in 34 Woodvale Green on Thursday, Sept. 8. The following Sunday, she was pronounced dead at the same building.

Pikuyak’s death is being investigated as a homicide. Ottawa police charged 33-year-old Nikolas Ibey with second-degree murder. The same man listed the room she found on Facebook.

Ibey was on probation after being convicted and sentenced to 45 days in jail for assaulting his former girlfriend, breaking and entering, uttering threats and failing to comply with his release order for crimes committed on October 31, 2021, according to reporting by the Ottawa Citizen.

Pikuyak’s friend, Joan Deibs, organized a candlelight vigil in memory of Savanna on Thursday, Sept. 15, at the building where she was found dead. Deibs posted the event on Facebook with the tag: #JusticeForSavanna. Hundreds of people attended the vigil.

Pikuyak’s family and friends travelled from all over the country to mourn her tragic loss. While shedding tears and sharing hugs, they prayed in Inuktitut in front of a bed of flowers and candles.

After thanking people for coming to the vigil to show support, Deibs concluded by saying, “I love you Savanna, and I miss you,” while holding back cries.

Many people from the Algonquin College community attended the vigil.

“I don’t think I’m going to be able to sit down in a classroom and not think about how Savanna should also be in one of those classrooms,” said Atlas Ruth, a second-year social service work diploma student at Algonquin College, a mental health peer supporter and an Indigenous advocate.

Ruth feels the college should arrange a tribute in honour of Pikuyak and wants more people at the college to know who Pikuyak was.

“The college is in shock, frankly, and we’re all mourning the loss of the beautiful young woman, full of life, full of hope, that was beginning a program where she was intending to help others through healing,” Brulé said.

Brulé wasn’t surprised to see many people from the college community at the vigil.

“We are a very tight-knit community and to see so many people from the college here in support of the family is heartwarming, and I know it means a lot to the family,” he said.

“I will certainly be looking at this as an opportunity to review our processes related to how we support our students with their accommodation and housing choices,” Brulé said.

“I think we do need to fight for safer and affordable housing in Ottawa. That is its own issue. I think there is a lack of affordable safe housing for women,” said Ruth. “That is something that’s a responsibility of the City of Ottawa, the municipal government and the provincial government, who are both dramatically failing on the housing fronts and the Indigenous rights fronts.”

Algonquin College is offering mental health resources to students and staff affected by the tragedy.

“As we grieve this senseless and tragic loss, the college is making resources available, including counselling services, to any employee or learner in need of assistance. Program chairs and faculty are also coordinating any support required for classmates, teachers and friends of Savanna at this difficult time,” the college wrote in a statement following Pikuyak’s death.

A community gathering will take place on Tuesday at 2:30 p.m. at the Algonquin College Ottawa campus Ishkodewan Courtyard to honour, mourn and pay respects to Pikuyak.