Culinary competitors put their skills to the test 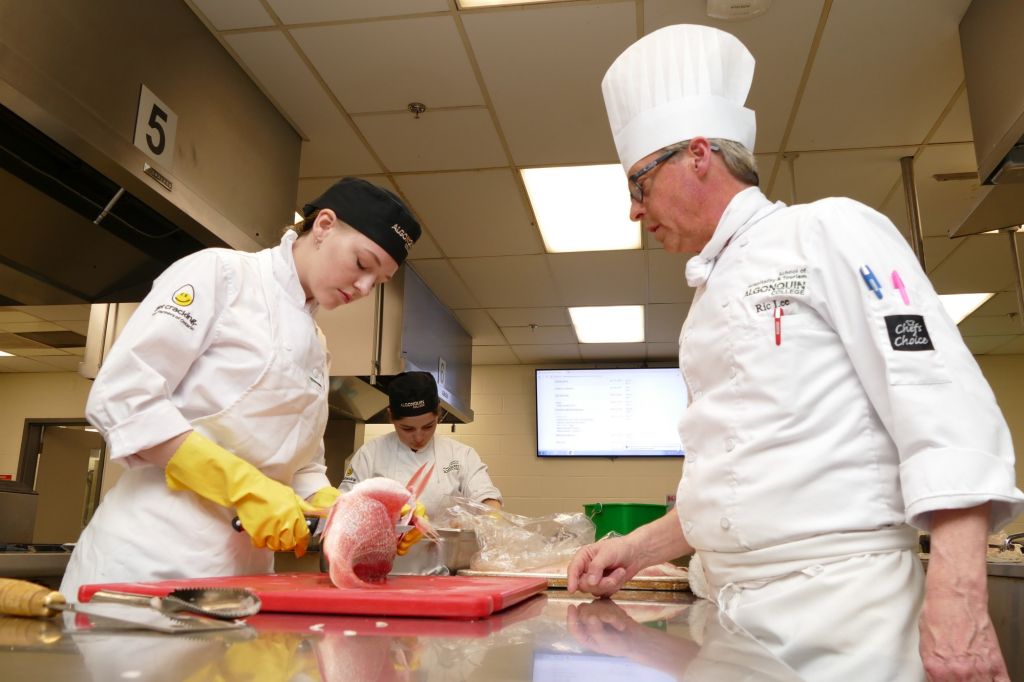 Chef Ric Lee, coach for Algonquin's culinary arts team for Skills Ontario, shows candidates Mariel Legere and Amber MacPhee how to prepare red snapper. The team will compete at the competition in Toronto from May 6 - 8. Photo credit: Emily Hsueh

Two culinary management students and their coach will be sent from Algonquin to Canada’s largest city May 6 – 8 to go for gold at the annual Skills Ontario competition, part of the largest skilled trade and technology competition in Canada.

The competition, which will be held at the Toronto Congress Centre, features intense events from trades ranging from auto painting, graphic design, culinary arts, IT support and cabinetmaking, to name a few. Competitions are held at three different levels: elementary, secondary, and post-secondary, the latter of which includes Algonquin. The college has been a part of the event for the last 10 years.

Chef Ric Lee is a professor who has been coaching competitors for the last three years. He took on the coaching position as a last minute replacement and has been doing it since.

“It entails me taking two students from our program — in this case two first-year students — who are just blowing my mind right now with their dedication and passion,” Lee said. “They’re going up against some of the top students of, say, George Brown, Humber, St. Lawrence and all the other schools in Ontario.”

The students chosen to compete have been granted the chance through a council primarily of professors, who put in recommendations for students with high grades, leadership and good progress.

Lee had not taught either of the two chosen chefs. He recounted, “I was in the office and a couple of the chefs said, “Hey we got two for ya,’ and it was a no-brainer for me because I just saw some of the work they were doing in their practical classes.”

Mariel Legere, one of the competitors, had previously competed at Skills Ontario at the secondary level. She remembers being chosen to go again.

“It was during one of my shifts in the restaurant and Chef Ric — I’d seen him but I’d never met him — he was like, ‘I want to speak to that young lady,’ and I thought, ‘oh no, I’m in trouble.’” After learning she was going to Skills Ontario, she was “stunned.”

“It didn’t really hit me until we started practicing and it was like, ‘okay, we’re really doing this.’”

Amber MacPhee also competed at the secondary level and is pleased to be returning to the stadium.

“It is going to be harder, but I’m not really worried; it’s just another challenge that’s going to be thrown in.”

Cory Haskins, the coordinator for the culinary management program, is also confident in the students representing Algonquin.

“These two — who are both year one students — are both positive, hard-working individuals. What they bring to the table, they are two young culinarians who are willing to take on the challenge that’s being put forward and do it really well.”

He is not only impressed with his program’s champions, but with the whole school’s participation as well.

“Algonquin does an amazing job of sending people to Skills…It’s a wonderful experience for students to get involved with. They get to compete and see what the other competitors are doing which is fantastic.”

The chefs are currently training twice a week with Chef Ric, preparing all the possible dishes that could be chosen for the intense competition. Should they or any other student place at the top of their trade, they will head to Nova Scotia for the Skills Canada National Competition at the end of May.

List of trades competing at Skills Ontario for Algonquin College: