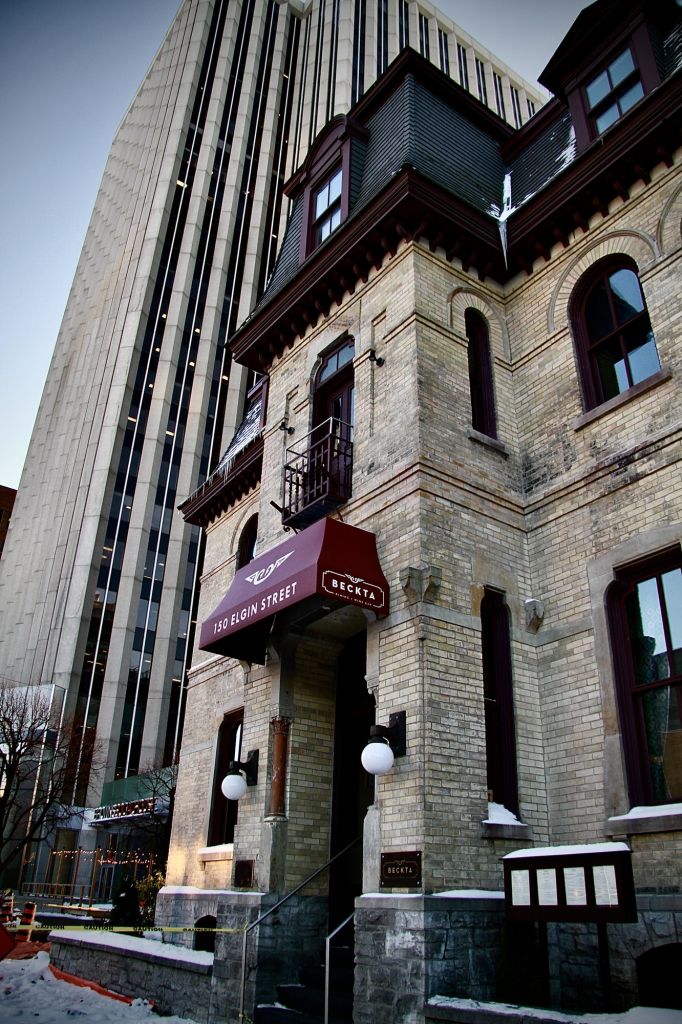 The 19th century, three-storey, tan brick house sits at the mouth of Elgin Street and, historically, welcomed the patients of Dr. James Grant.

Now, under the watchful eye of the big businesses at Performance Court, Grant House has a new patriarch and the building bears his name: Beckta.

Beckta and Cardillo have close ties to Algonquin College. Both of them graduated from the college’s School of Hospitality and Tourism in 1998 and continue to actively support the college and its students.

The Times recently sat down with Beckta and Cardillo to chat about their experiences with Algonquin College, in Grant House and in the restaurant industry at large.

Where did your interest in food and wine come from?

Cardillo: Mine is mostly familial. We never went to restaurants really, except for special occasions, but family dinners were a huge thing. I think that the interest really came from the family dinners that we’d do. Whether it was the Christmas, Thanksgiving, Easter kind of thing or just get-togethers that were picnics. Around food there’d often be lots of conversation. And my mom. My mom is a great cook.

Why did you choose Algonquin for your studies?

Beckta: I ran into a guy who was taking the wine program and he suggested that I go along with him. I really enjoyed it so I just kept doing it and I finished my sommelier program there. I just thought that would be a nice way to round out my non-traditional education that I got through internships in restaurants. But yeah, I just thought I’d learn about wine.

Steve, you spent a bit of time in New York City, as well. Has that influenced your vision for your Ottawa restaurants?

Beckta: Oh yeah, absolutely. I spent four years in New York. Two years working for Daniel Boulud as the opening sommelier of Café Boulud on the upper east side. He certainly taught me about trying to achieve perfection and working with the best products in the world, putting on lavish dinners and making sure people felt very spoiled. And then the next two years I spent working with Danny Meyer at Eleven Madison Park. He and Richard Crane, his business partner, gave me a language around what it is to care for people, what actual hospitality means and how to deliver the emotional goods, as they say. So that was a really important transition for me because it’s less about the food and the wine that are in front of people and more about how you make them feel.

With TV Chefs like Gordon Ramsey and Anthony Bourdain, there’s a bit of a stereotype of the angry, tortured, badass chef. Can you speak to that at all given your experiences in the industry?

Cardillo: Absolutely. It’s a stereotype that we work really hard not to have. I think it’s a hot topic in general over the last few years about working conditions in the restaurant industry. I worked at a French place that no longer exists that was insane. It was a very well-known place in Ottawa for a long time and it closed probably 2002 or something but it was manically nuts. You learn as you go along but you really don’t want to be that way. Yes, those cultures I have come across. Yes, they have existed. But I think as a whole as an organization we’ve been working really hard the last few years to make sure that that’s not what we are.

Beckta: I think our industry is getting a lot better over the years. I think we’ve recognized that mental health issues need to be dealt with just the way that physical health issues are. We have to have a lot of empathy and caring for people. For us, if we don’t care for our staff, they will never be able to care for our guests. It’s not like the TV shows. Have I seen those sorts of circumstances? Yes. Do we have those here? Not really. People don’t work 100 hours a week in our places and they don’t get burnt out in the same way, nor do we encourage that kind of culture because it’s unsustainable. We need to make sure that there’s some balance to what we serve and also the culture we create.

Why does the Beckta team hire from Algonquin College? Do you hire Algonquin first or has it just sort of worked out that way over the years?

Cardillo: I got a lot out of it so I will always have a soft spot [for Algonquin]. We’ve contributed in various dinners there over the years, Katie [Executive Chef at Beckta] is very involved in Algonquin, she’s a graduate as well and keeps in touch with all the chefs, Steve and I both belong to the boards just trying to make the college better and I’m pretty proud of it. It’s a good program. We find that there are some pretty good people that are coming out of the college.

Beckta: Do we have a bit of a preference for people from Algonquin? Sure. To have some shared background, it certainly helps. It’s not the defining character but certainly there’s lots of great people who go to Algonquin, so it makes it easier to hire them for our restaurants.

Has the Beckta Restaurant Group any future plans for the Ottawa food scene – or elsewhere?

Cardillo: We do. We absolutely do. And in fact, 2020 should be a really interesting year.

Beckta went on to share a message with Algonquin students past and present: come visit us.

“We love hiring [Algonquin students],” said Beckta. “If you have that natural desire to care for others and a deep sense of empathy and curiosity, then please come and see us because we’d love to have a conversation.”