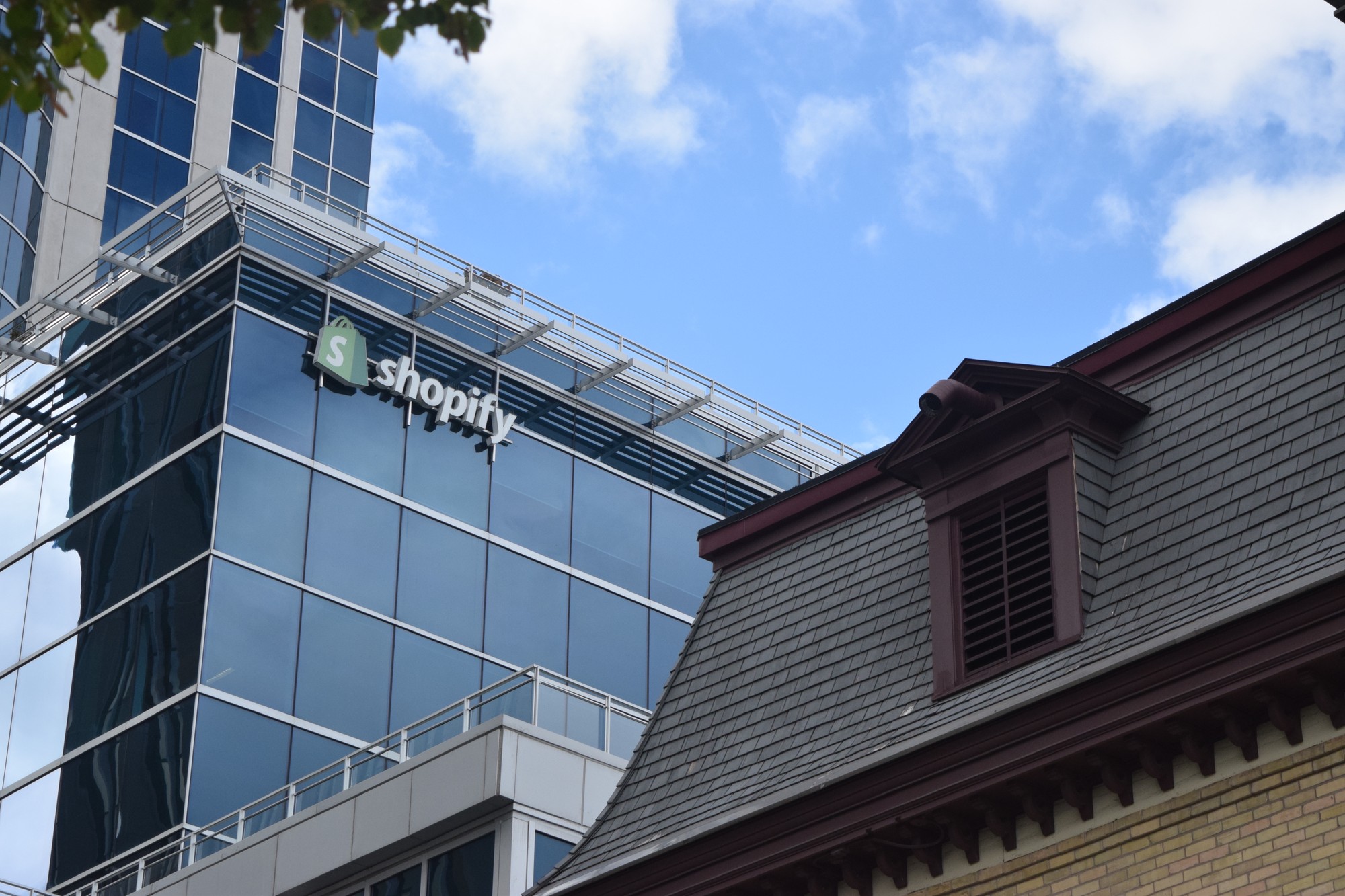 The former Shopify Ottawa headquarters is located on the corner of Elgin and Gloucester Street. Photo credit: Tamara Condie

Back in April of 2020, Naina Kansal, a former mentor with the office of Applied Research, Innovation and Entrepreneurship at Algonquin College, was consulted by a baking and pastry arts student who wanted to sell her Ukrainian cakes professionally.

Kansal knew exactly what would take this aspiring entrepreneur’s business to the next level — attending a “Build Your Shopify Store” workshop launched by ARIE that same month.

“I mentored the student until about December of 2020 and now she has a business partner,” said Kansal. “Her online presence is great and watching her business grow was so cool, all from her attending our Shopify workshop.”

The workshop is held twice a semester by the ARIE office for student innovators looking to explore e-commerce. In the most recent workshop held on Sept. 28, the office announced that it will be piloting a week-long Shopify boot camp open to all students on Oct. 26.

The rollout of this boot camp is in response to a growing demand for the digitization of product and service sales that began slightly before the pandemic, according to Kansal, who is now a Startup Canada employee. Kansal says that the pandemic spurred a boom in entrepreneurship within the college community.

“When we first launched the sessions, we saw about 30 employees between our Shopify and Business Model Canvas workshops,” said Kansal.

In just a few months, Kansal saw 120 attendees between the two events.

“We had people from different departments reaching out to us to provide Shopify workshops tailored to their programs,” said Kansal.

According to Stephen Gagne, a business professor and ARIE office employee at the college, these workshops have fostered a strong relationship between students interested in web design and small business owners around the city.

“The core operation of ARIE is to connect students who are doing awesome things with business owners who are looking to do those awesome things,” said Gagne. “The office encourages bringing different skillsets together, such as coding and photography, to diversify students’ skills and strengthen innovation.”

A prime example of the endless possibilities that emerge from having a multidisciplinary skillset is James Rankin, a former marketing student from the college and the founder of North Brew Coffee.

Having owned and sold a lawn-care business before attending college, Rankin had a taste of entrepreneurship and planted the embryo that evolved into North Brew Coffee, a local fair-trade brewing company, during the 12 week-long Ontario college strike in 2017.

According to Rankin, developing an e-commerce site would be the factor that elevated his business concept to the next level, despite being told by his credit counsellor that the idea seemed unrealistic for a 19-year-old.

“I remember having this professor named Norman LeCouvie in my second semester for a professional selling course,” said Rankin. “He would show us his Shopify site where he sold high-end dog cages. I watched his sales happen in real-time and was in awe of how many people were buying them.”

Rankin eventually built his own Shopify site in July of 2018 for North Brew Coffee and credits a lot of the company’s success to having an e-commerce system that allows him to generate revenue around the clock.

“I thought it was so cool that LeCouvie was able to teach a class and make money from his business at the same time,” said Rankin. “I wanted something where I could be doing anything in the world while selling my product, and Shopify was that thing.”

The notion of innovation is going to be especially important for students entering a rapidly evolving workforce, according to Gagne. He encourages students from all disciplinary backgrounds to learn more about e-commerce to diversify their skills.

“Getting into the mindset of looking for what’s next, or even better, creating what’s next, is going to be absolutely essential for people that want to find or create work for themselves.”

The ARIE office will be releasing details on the Shopify boot camp in the coming weeks on their events page.