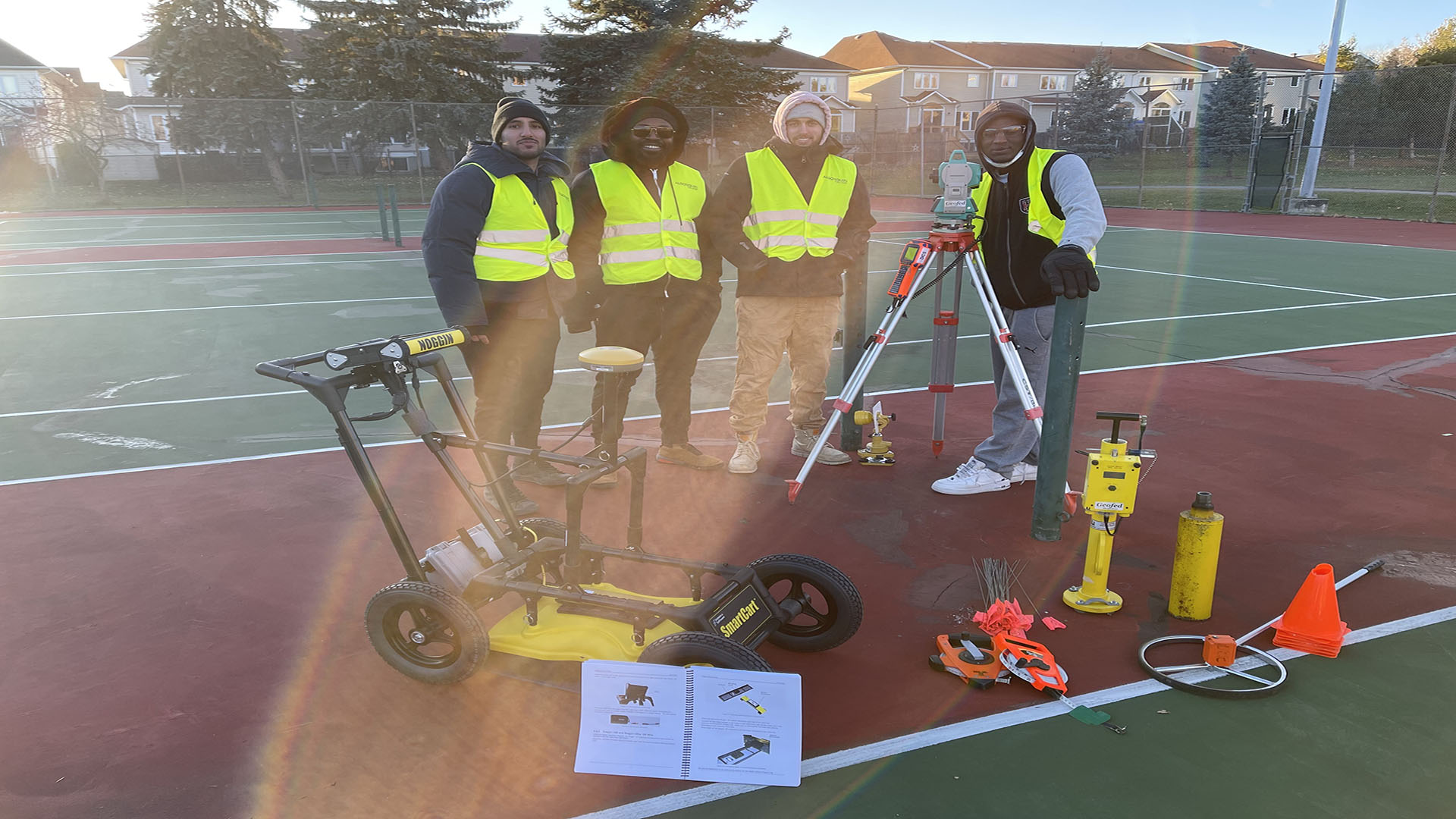 Group 08CF with some of the equipment used for their project.

The quartet, group 08CF, had chosen the Elmridge Tennis Club in Gloucester for their project. Their goal was to analyze the the conditions of the courts then develop a permanent repair plan for the club.

The group made their first site visit on Friday, Oct. 15, 2021 and by Saturday, Nov. 6, 2021, they completed their site work. However, the group felt like they had not done enough.

“We asked ourselves what more could we do, and our professor mentioned [ground-penetrating radar],” said Saheb Birgi in a Zoom meeting. “So, the whole team did some research and we tried to see if we could get GPR equipment.”

“A ground-penetrating radar instrument makes it possible to measure the dimensions, depth and thickness of subsurface targets,” he said. This is done by sending radio waves into the ground at a certain speed and then recording the time taken to travel back to the receiver. This number is then divided by two to give us a depth image of what is underneath.”

The group was eager to give the idea a try.

“It was a struggle,” he said. “We drafted up an email, sent it to the course coordinator and our professor. They sent it to someone above them and it took a while for a reply.”

Unfortunately, they learned the college had no money for them.

“It finally got resolved and they were like ‘No. We don’t have a budget. If you want you can do it yourself.’ They were strongly advising us not to do it,” he said. “But once we actually got it done and got the equipment, they congratulated us.”

The students decided to reach out to Geofed Ltd, an Ottawa-based company, which turned them to Sensors & Software Inc., a Toronto-based company. The two parties came to an agreement allowing the students to borrow the equipment.

Birgi and Halpren drove to Toronto on Friday, Nov. 26, 2021. They signed a waiver, picked up the GPR and drove back to Ottawa. The group conducted the site visits over that weekend, before they drove the equipment back on Monday.

“We did like 20 hours of driving in three or four days,” said Birgi.

“He was willing to sign just in case something went wrong,” said Halpren. “If we broke the equipment, he’d have to pay for it. He took a risk doing that.”

Despite the inconveniences, Birgi says they would do it again if they had to.

“Yes, hundred percent. It was such a great learning experience,” he said. “I feel like we would never have known what a GPR system was if it wasn’t for this project and going out of our way in getting it, learning about it, and using it.

“Using the GPR equipment allowed us to observe the underground parameters at which the Elmridge Park Tennis Club built their courts. It confirmed that there are anomalies however, for the most part the deep subsurface construction was built very well, with minor discrepancies. Overall, using it provided another data set for us to compare with, thus makes the report more soundproof and thoroughly accurate,” he said.

The total value of the equipment loaned by Sensors & Software Inc. was $48,390.

At the time of writing, group 08CF project’s conclusions and recommendations have yet to be completed.