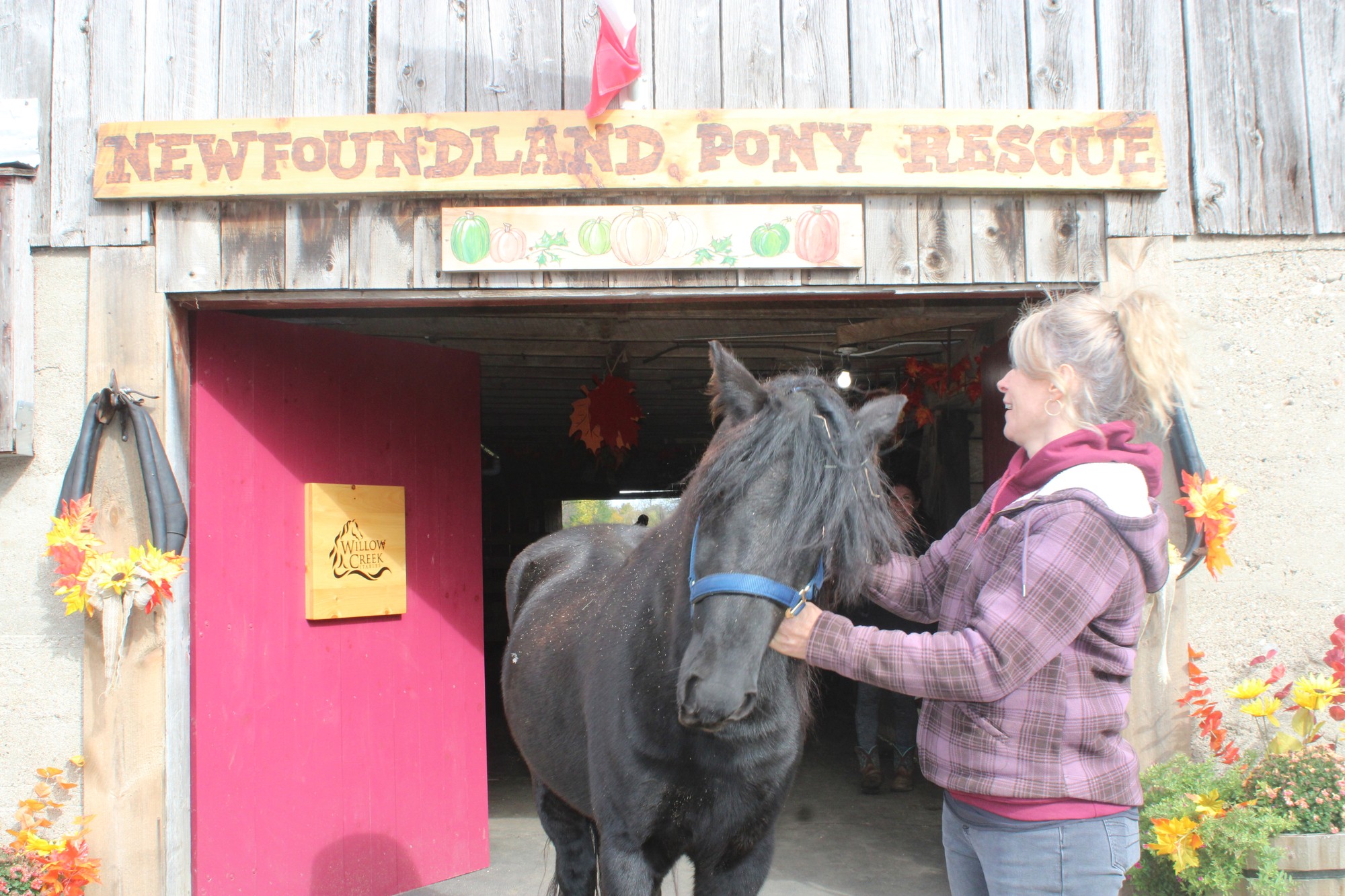 A short drive past Perth and up a long laneway is Willow Creek Stables. Owned by Korrine Affleck and Wayne Jordan, the farm provides a home for rescued Newfoundland ponies and a breeding program for this critically endangered equine species.

After rescuing a Newfoundland pony a few years ago, the couple learned of their endangered status and decided to begin a breeding program. They currently have 14 full-breed and three part-breed Newfoundland ponies on the farm.

Since the fall of 2021, wood shavings from the Perth Campus of Algonquin College have been donated to Willow Creek Stables located just outside of Perth. The wood shavings are used for bedding on the farm, which frees up money for other necessities.

Several of the large oversized bales of hay are needed weekly Willow Creek Stables at a considerable cost as the ponies are not able to eat Ontario grass as it is too rich for their digestive system. Algonquin College’s Perth Campus is helping to support Willow Creek Stables which, in turn, is helping to increase the number of Newfoundland ponies, a critically endangered breed.

Inside the immaculate barn, Affleck and Jordan both expressed their thanks to Algonquin College for the donation of the shaving. From their stalls, Maggie and Moonlight, the two oldest Newfoundland ponies at WCS, acknowledge their owners’ presence in their own special way. Maggie continued eating her hay, looking up at Affleck occasionally, while Moonlight came to the stall door to interact with Jordan.

Moonlight was a victim of abuse, Affleck explained, and was in very poor physical condition when he arrived at Willow Creek Stables. Jordan was instrumental in helping him heal from the abuse. As Jordan stroked his head, Moonlight’s eyes shone with pleasure at Jordan. Soon Maggie was on her way over to visit Affleck in search of a treat.

The Newfoundland pony is known for its docile temperament, they don’t carry genetic diseases and enjoy being outside whatever the weather, Affleck says. They range between 12-14.2 hands tall, four and five feet, weigh between 500 and 900 pounds and have many adaptations for the Newfoundland climate. These surefooted animals have short ears to protect them against blackflies, thick hair and low-set tails help keep ice and snow off them before noting they are usually healthy animals with no genetic diseases.

This rather short, stocky but hardworking equine emerged as a distinct breed from ponies brought by the first European settlers a few hundred years ago and are considered a landrace species. A landrace species is one which has evolved in response to the climate of an area, in this case Newfoundland, rather than human genetic breeding.

“The terrain is very rocky and hilly with extremely poor soil for growing, so the fields around rural homes were left wild,” Megill said. “You would sometimes see small herds of ponies as they trotted down the rural roads between fields.”

Larry Sharron, a friend of Megill’s, who grew up in Botwood a community in the central Newfoundland, explained how “from 1945-1960, many families had a Newfoundland pony.” The ponies were used to bring the firewood and coal used in heating homes in winter, with ponies usually wintering in outbuildings on the farm.

In spring they were pastured, gathered into small herds, with people keeping track of their location. He recalled as a youngster, he and his friends would locate a herd and “catch one or two and ride them bare back through the trails” and in the fall “the men would locate the herd and their pony home for winters work.”

One of his former neighbours, Sharron said, had a close and long-lasting relationship with a Newfoundland pony. They had spent their lives working together and were often seen in the neighbourhood.

With the opening of the Newfoundland portion of the TransCanada Highway in 1966 and the subsequent end of rail service in the province, there was a correspondingly increase in road traffic. Affleck mentioned records show in the early 1970s there were approximately 12,000 Newfoundland ponies roaming freely in the province.

As road traffic increased, so did the collisions between the wandering Newfoundland pony and vehicles which eventually led to municipalities enacting anti-roaming by-laws. With the need to feed their ponies with imported and costly hay, the day of the Newfoundland pony began to wane.

Andrea Hyde, information specialist in the Legislative Library of Newfoundland and Labrador, explained she had found records in the provincial department of Fisheries, Forestry and Agriculture regarding the decline of the Newfoundland pony. These records indicated the pony population decline was due to several factors. Hyde described these as including horsepower being replaced by mechanical power, owners gelding stallions and communities passing anti-roaming legislations.

This led to thousands of ponies being exported to off-island slaughterhouses and eventually sold as food in European countries. Within a few years their numbers had declined to the point where this gentle, friendly pony was listed as “critically endangered by Rare Breeds Canada, The Livestock Conservancy and Equus Survival Trust” according to information available on the website of the Newfoundland Pony Society.

The Newfoundland and Labrador Heritage Animals Act was passed in December of 1996 after the NPS convinced the government “that the Newfoundland Pony was a living part of the province’s cultural history” requiring legal protection before there few too ponies to maintain a healthy population.

This legislation required all Newfoundland ponies who were exported to have an export permit and mandated the NPS “to protect and maintain the Newfoundland Pony Registry.” The registry provides a lineage report and location of ponies as well as the opportunity for DNA testing of ponies.

In addition to the NPS, there is also the Change Island Newfoundland Pony Sanctuary which provides a breeding program to increase the number of Newfoundland ponies. The NPS is currently working to establish a Newfoundland Pony Heritage Park and Pasture near Trinity Bay in Newfoundland which will provide breeding and pastureland for the ponies.

With the pony population numbers critical, the good news in the Newfoundland pony community was that nine foals were born in 2021.