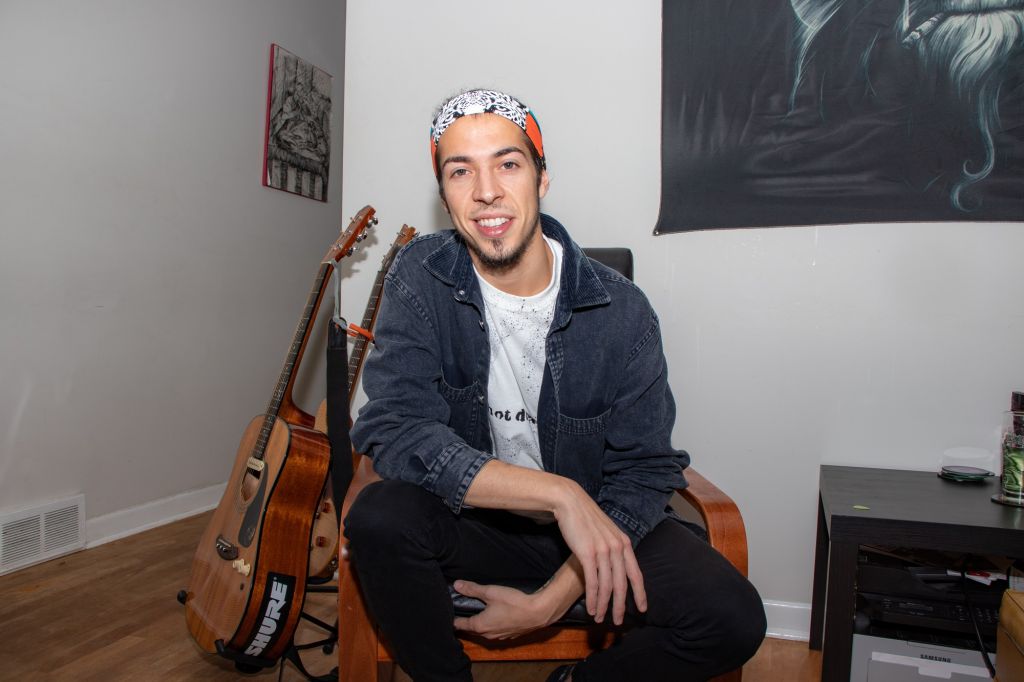 He barely had a day to craft his guitar part for a song he was about to perform in front of a private crowd. He knew industry officials would be scouting his performance, so he needed to make sure everything was perfect.

He was ready to give it his all, as a contract offer to play with longtime friend Jamie Fine and fellow Algonquin music industry arts alumnus Elijah Woods was on the line.

The song he had to perform just happened to be Elijah Woods x Jamie Fine’s certified platinum hit, Ain’t Easy.

Although the anticipation was nerve-racking, St. Jules knew that the past two years he spent playing patio shows and small venues with Fine prepared him for this moment.

He stepped onto the stage and let his talent shine through in a performance which impressed Scott Borchetta – the CEO and founder of Big Machine Records – to the point where he praised St. Jules’ chemistry with the band.

Shortly after the show, St. Jules signed a contract and has been touring with the band since.

His long-standing personal and professional relationship with Fine and Woods might’ve helped him get there, but the dedication and hard work that St. Jules put in is the reason why he’s been able to carry that success and pursue his own path in this unforgiving industry.

As the next step in his career, St. Jules quit his day job as a server at Moxie’s and started to tackle his music career full-time.

“I think that as a musician, you have to cross that line at some point,” St. Jules said. “I have to put myself in that almost moment of fear to push myself to get things done.”

St. Jules knew it was time to move on after missing out on some opportunities – something he didn’t want to happen again.

“I had a chance to go backstage and party with Nickelback and Guy Fieri one night, but I had to work,” St. Jules said with a chuckle. “There’s been so many times where my support job has gotten in the way so I felt like it was the right time [to quit].”

With a flexible schedule, St. Jules can now spend more time on his own band, Hot Donna.

“In the last month or so, I’ve contacted so many people and I think we’re gonna be organizing a little tour next May,” St. Jules said.

In addition to organizing a potential tour, St. Jules has dabbled in fashion by creating band t-shirts that have been popular so far.

“I made merchandise for one show as a test, and I sold the 25 t-shirts immediately,” St. Jules said. “Either people like the band or they like the t-shirts – or maybe both – so I figured, yeah, let’s keep doing this.”

According to Hot Donna bandmate and fellow music industry arts alumnus Félix Lebeau, St. Jules’ creative output and work ethic are next to none.

“As a musician, it’s ridiculous how talented the guy is,” Lebeau said. “He has a new song literally every two days and he’s working on new things every day.

This work ethic is exactly what is needed to succeed in the music industry.

By simultaneously working on his band and his touring career with Elijah Woods x Jamie Fine, St. Jules is doing what needs to be done to achieve his goal of a self-sufficient music career.

Colin Mills, the coordinator of the music industry arts program at Algonquin College, echoes that statement.

“Everyone in the industry these days needs to look at multiple streams of revenue, and multiple projects is kinda what that is,” Mills said. “It also allows him to be more creative on his own part – writing the songs and being the visionary of that group – so I think that’s great.”

Handling multiple musical endeavours is not an issue for St. Jules, as music is an irreplaceable part of his being.

“Music has been my outlet for facing my fears, for dealing with my low points in life,” St. Jules said. “Ultimately, I just want to live my life and be involved with music in any way, shape or form.”