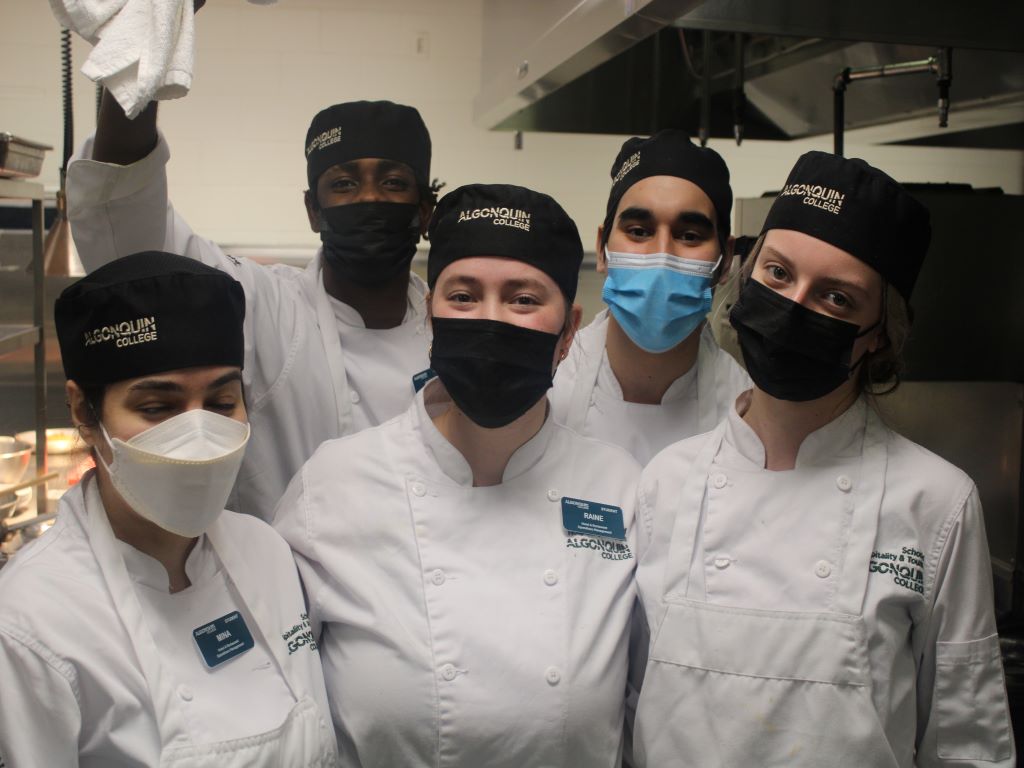 Culinary management students display their pleasure to be back at Restaurant International. Photo credit: David Rotel

The restaurant was forced to close down due to provincial COVID-19 restrictions announced in January.

“Right now we’re only open four lunches and one night. That’s due to our enrolments because Restaurant International is student-driven for the courses, so if we don’t have students cooking in the classes we don’t open,” she added.

Some chefs had concerns about the future of the restaurant while it was temporarily closed.

“There’s so many variables and so many things going on. Even today, we don’t have firm dates on when things are going to happen. So yeah, for sure I was concerned,” said Roy Legge, chef instructor of the culinary management program.

Other chefs have shared their excitement about being back in the restaurant.

“It feels absolutely great to be back,” said Wes Wilkinson, a chef instructor in the culinary skills program.

Wilkinson revealed some of the rules the restaurant has to implement because of the health measures.

“We have to abide by the COVID restrictions and laws the college and the Ministry of Health set up. So everyone needs to have all of their doses,” Wilkinson said.

According to Wilkinson, the restaurant will provide a smaller menu as a way of practising and making sure students get their learning outcomes.

Working at Restaurant International can be a great way for students to gain real work experience.

Andrew Skorzewski, another chef instructor of the culinary management program explained why the reopening of Restaurant International is beneficial for the learning experience of student chefs.

“It’s really nice because it adds an element of realism for the students rather than just making the food for nobody,” Skorzewski said.

“They get real-life experience in an educational setting. So they can practise, make mistakes and learn stuff before they go out and work in the industry,” he added.

First-year culinary skills student, Jasper Bundale-Cowan, said he was not concerned with the restaurant’s temporary closing.

“I knew eventually we were going to reopen, it was just a matter of time,” he said.

“I guess it was kind of just mentally preparing for it to reopen during that time. Making sure to learn as much as you can, gain confidence working in a kitchen and get used to the way your restaurant functions,” said Bundale-Cowen.

“Working here is definitely beneficial for me. I work at a restaurant right now and it’s even better having this course because It’s a bit more organized here than my actual job, which is nice,” he said.

“I’m looking forward to just trying to gain as much knowledge and experience as I can. Learning every step I can along the way and improving every day,” Bundale-Cowan added.

First-year culinary management student Ali Roushdy is another student who didn’t have any concerns.

“I went to Egypt to work and there weren’t that many shutdowns over there so I didn’t have too many concerns,” he said.

“Working here is great because it helps you get a feel for how everything runs in an actual service. It boosts your confidence and it’s really helpful to get the speed and technical stuff down,” Roushdy added.

Despite being partially open for the moment, the restaurant manager is excited for the future of Restaurant International.

“It gets more exciting for students when there’s a lot more happening in the restaurant because we’re fairly popular. I think we’re Ottawa’s best-kept secret,” said Dewar.