Capturing music lovers through the passion of performance 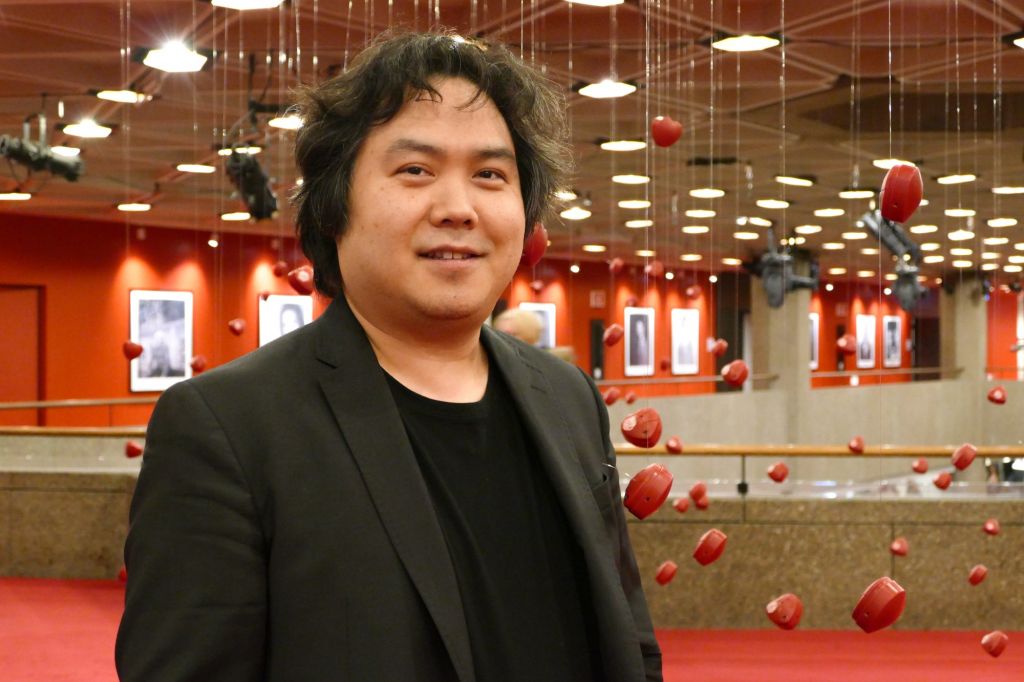 Violinist Yosuke Kawasaki walks through the National Arts Centre before he appears in concert on Feb. 14. He has been the NAC Orchestra's concertmaster for the last 11 years and doesn't intend to change that any time soon. Photo credit: Emily Hsueh

Wearing one of his signature polo shirts, the leather jacket from when he first came to Ottawa and a laid-back demeanour, no one would have reason to believe Yosuke Kawasaki to be any more than a visitor to the National Arts Centre.

But Kawasaki is no stranger to the NAC.

In fact, for the last 11 years, he has been a passionate leader of the world-class National Arts Centre Orchestra.

Kawasaki, 41, is a renowned violinist who performs in the paramount role of concertmaster, only the second musician to earn the spot in the orchestra’s nearly 50-year history. Since his arrival to the nation’s capital for the orchestra’s 2007-2008 season, Kawasaki has captivated Ottawa with his devotion for all the music he plays. Outside the music scene, he is an easy going family man with a subtle sense of humour. But when he is in his musical element, he seems to transform into a brand new person as he plays with a passion no one can miss.

“Just watching him, he’s kind of crazy,” Blythe Allers, a fourth-year violin student at the University of Ottawa said of Kawasaki. “During dress rehearsals, he’s more laid back, but during the concert he stands up. He’s on his chair and he gets up and it’s crazy.”

Kawasaki began his musical endeavours in New York when he was very young, as both of his parents were accomplished musicians themselves. His father, Masao Kawasaki, was a violin professor at The Juilliard School, where Kawasaki was part of a program designed for young musicians to study music at a serious level called The Juilliard Pre-College Division.

“I was going to Japanese school on Saturdays and I had just gotten into Juilliard Pre-College, which also met on Saturdays,” Kawasaki recalled. His mother would drive him to and from each of the lessons, which soon became a hassle. One night, his parents pulled the 10-year-old Kawasaki aside and told him to make a choice. “They asked me to choose between going to Japanese school or music school. Obviously I kept going to music school.” He later went on to study full-time at The Juilliard School where he graduated in 1998 with a bachelor of music.

After his time at Juilliard, Kawasaki found himself traveling between Japan and his home of New York as he spent his time freelancing. Eventually he landed his first salaried job in 2014 as concertmaster for a group called Osaka Century Orchestra — now called Japan Century Orchestra — in addition to other freelance jobs. It was there that 29-year-old Kawasaki had his first connection to the NAC Orchestra.

“I arrived in Japan for a job with the Mito Chamber Orchestra. I was about to check in to the hotel there and my Japanese cell phone rang and it said it was from my manager. It was strange because I never told her I was going to be in Japan,” Kawasaki said. “So I answered and it was Pinchas Zukerman on the phone. It was just shocking.”

Zukerman is a renowned violinist and violist and was the conductor for the NAC Orchestra at the time. Coincidentally, he was with Kawasaki’s manager in Japan telling her that he needed a concertmaster, which is how the two got in contact. Zukerman invited Kawasaki to be a guest concertmaster and then to audition for the role, but he wanted footage of Kawasaki performing first.

Nelson McDougall, the NAC’s Orchestra manager, was there when Zukerman viewed the recording.

“He had the TV in the corner and he put in this tape and it was Yosuke,” McDougall recalled. “Pinchas pointed at the TV and said, ‘That’s the guy’. He was so outside of himself, so excited saying, ‘I think that this is the person.’”

After a long audition and registration process, Ottawa’s most prestigious ensemble had their new lead musician, who continues to spread his passion for the art with all who visit the National Arts Centre. That passion and how it transforms Kawasaki as a person is a recurring theme among those who have watched him perform.

Pianist Vadim Serebryany is an old friend of Kawasaki’s, having met in the Juilliard dormitories as roommates. They are now part of group called Trio Ink in which they play together with cellist Wolfram Koessel. Serebryany notes that while Kawasaki is very serious about his work, he is quite a laid back person.

But Nelson McDougall remembers seeing a very different person the first time he witnessed Kawasaki play, on that tape in Pinchas Zukerman’s office.

“He was clearly someone in control of the orchestra and showing passion. That’s what you want in any orchestra. You want somebody that an audience will watch and be moved by. That’s what he embodied.”

“When he’s really into it he spends half of the concert out of his chair,” McDougall added. “He just had this inimitable style. It was Yosuke Kawasaki and he was leaping off his chair. And that became so symbolic of what he does.”

Another person who has taken note of Kawasaki’s devotion is violinist Jessica Linnebach. She is the associate concertmaster for the NAC Orchestra and was a part of the group before Kawasaki joined. They are now happily married and have two young children: Hanako, 5, and Kaj, 2.

Linnebach had seen many people come to Ottawa to play as guest concertmaster before she met Kawasaki. But there was something different about him that stuck with her from the first time they played together.

“As soon as we started playing, I thought, ‘Wow, this is awesome, he’s so much fun to play with. He was just full of life and passion,’” Linnebach said of the encounter. “It was immediate to me, it was the first thing that I noticed. It was something we hadn’t seen before, and it was very exciting for our group.”

In addition to his role as concertmaster, Kawasaki has taken on several other endeavours that allow him to share his passion for music with people all around the world. He is the musical director of a Japanese festival called the Affinis Music Festival and the artistic adviser to The Unbeaten Path, a newer music festival in Bulgaria. He is also an adjunct violin professor at the University of Ottawa.

“I do enjoy it,” Kawasaki said about his job as a professor. “The biggest thing for me about teaching is that I can teach myself through it.”

As is turns out, he is not only a teacher in a school setting. Vadim Serebryany of Trio Ink expressed that, “I feel that I have learned more by working with him for more than 20 years now than from any of my teachers. I owe a lot of my musical identity to our work together.”

Providing a different perspective, Nelson McDougall adds that “as an audience member, he’s mesmerizing. When he’s engaged, I don’t think I’ve ever seen any leader like him. He is truly one of the great concertmasters around right now. He’s really a gifted musician and leader and we’re lucky to have him.”

It’s clear that Yosuke Kawasaki is devoted to what he does and influences countless other people with his work. For someone as passionate about performing as he is, it comes as no surprise that he has no intentions of stopping anytime soon.

“It’s the best thing that I’ve ever done,” he said with a smile. “It revolves around my entire life. Through music I met all these friends, I met my wife, and I couldn’t imagine my life without it.”