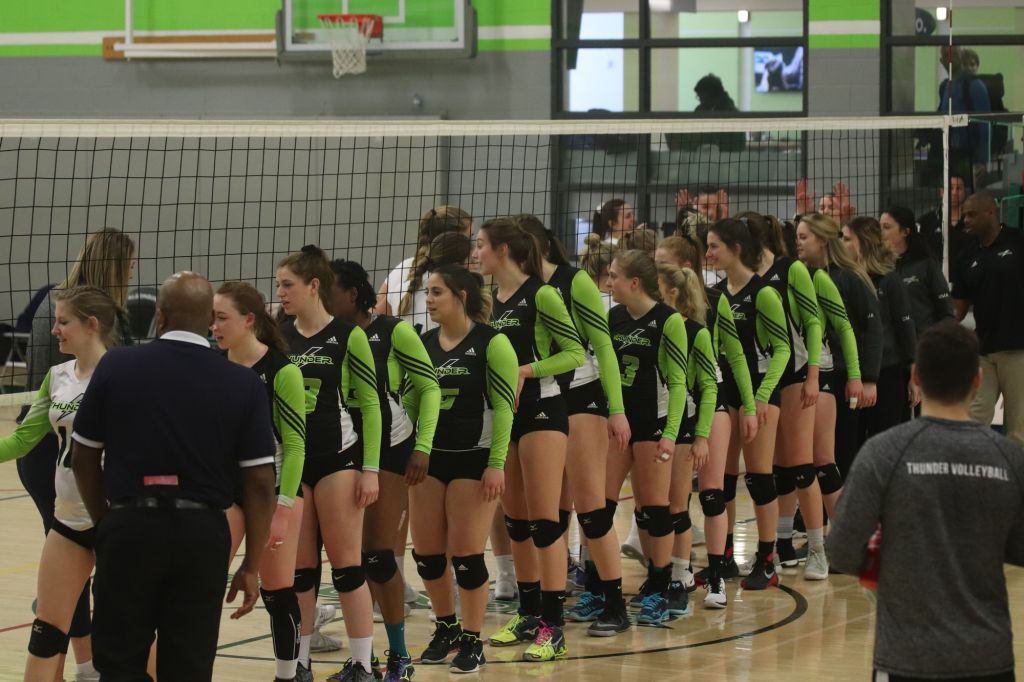 The Algonquin Thunder congratulate their opponents after a tight contest. With most of the team coming back next year, the Thunder are confident they'll come back stronger. Photo credit: Brian G. Sharbin

It was time for a comeback.

Finding themselves down 11-14 in the final set of the game, the hometown Algonquin Thunder women’s volleyball team would have to score five unanswered points in order to make the trip to the provincial championships.

After an intense back and forth between the Thunder and the visiting Niagara Knights, Algonquin’s Tatiana Weissflog was able to tip a ball in for the kill, bringing the score to 12-14.

Weissflog then hit a great serve to start the next play, but the Thunder would never get a chance to attack as the Knights responded with a smash that sealed the game.

Reflecting back on an otherwise successful season, coach Everton Senior could not hide his disappointment with the final result.

“The season was good but it all culminates with this match and going further, so as far as that all goes, it ends up being a disappointment because we didn’t achieve the goals we wanted,” Senior said. “It’s unfortunate because I thought we had a team that could’ve done some damage at the provincial championships and we just won’t get to see that.”

The loss was especially disappointing since the Thunder were able to rally past a 20-25 first set loss to win two consecutive sets in convincing fashion.

Unfortunately, the Thunder were not able to keep up the pace and were defeated in the fourth and fifth sets.

In an interview after the game, Algonquin’s Marie-Chantal Ozorak was quick to point out what she thought was the main factor in the team’s defeat.

“Little mistakes,” Ozorak said. “They got us on tips and stuff like that…we’ll have things to work on [for next season].”

“We just made too many errors in the end,” Senior said. “The fifth set usually comes down to the team that makes the least errors. And we made a lot of errors in that fifth set.”

The defeat might sting now, but most of the team will be back next year to try and improve on this year’s record.

Breanne Scheerhoorn – one of the leaders in the room and on the scoreboard – won’t be one of them as her time at the college comes to an end. Nevertheless, she gave her teammates some tips that should help them for next season.

“Work on beach volleyball this summer to maintain and improve technical skills and work on mental strength so that next year everyone can stay mentally strong when it comes to the grind,” Sheerhoorn said.

With the loss, the women’s volleyball team end the season with a 14-5 overall record.