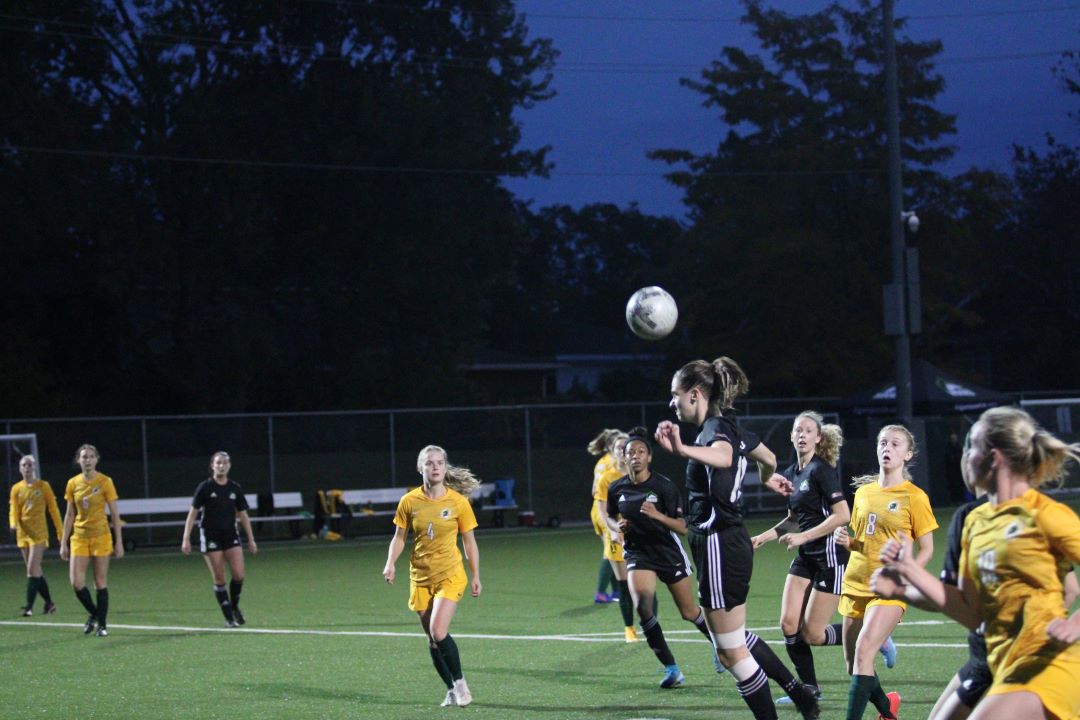 The Algonquin College women’s soccer team equalled its biggest win of the season with its victory over the Fleming Knights on Wednesday evening.

The Wolves, who were still missing some important players, scored eight goals in a match for the third time this season and second time at home.

For the first time since their 8 – 1 win against the Loyalist Lancers, the Wolves scored in the first half when Lisa Hartill fired a shot past the Knights goalkeeper in the 17th minute. Her second goal broke the game open for the Wolves as they scored four goals in 13 minutes.

Speaking after the match about her three-goal performance, Hartill was overjoyed.

“I feel really good considering I’m a goalie,” she said. “I’ve been playing in net all season but the last two games I’ve played outfield because we’ve been short. It feels great because I’m not a midfielder in particular but it looks like I can play there.”

Hartill scored in the 32nd minute, Jordan Blades-McHenry scored in the 37th, Isabel Martinez found the net in the 41st minute and Erin Cunningham sent the Wolves into half time at 5 – 0 with her goal in the 45th minute

Phillips’ team came out of the half time break and continued to play well. It took only three minutes for Martinez to complete her brace before Hartill finished her hat trick in the 58th minute, taking the score to 7 – 0.

The Wolves would find the goal one more time before the final whistle as substitute Caitlin Pavone’s shot was deflected into goal in the 87th minute to complete the 8 – 0 rout.

Looking ahead to Saturday’s match against the undefeated Durham Lords, Hartill said the attitude within the group is overwhelmingly positive.

“We’re feeling good. Coming off of two wins is definitely helping our confidence, especially after scoring eight goals today. So it feels very good and I think Durham is going to have to come in really hard,” said Hartill.

“Durham is a big game,” said Phillips. “We’ve still got a couple injuries that we’re trying to get through so we’ll have the majority of our squad but we will be missing a couple players.”

Algonquin College had already secured their spot in the playoffs, but the win means they will host their crossover game on Oct. 22.

In what is their last regular season match, the Wolves play the Durham Lords on Saturday at 2 p.m. at the Algonquin College Students’ Association Sports Field.