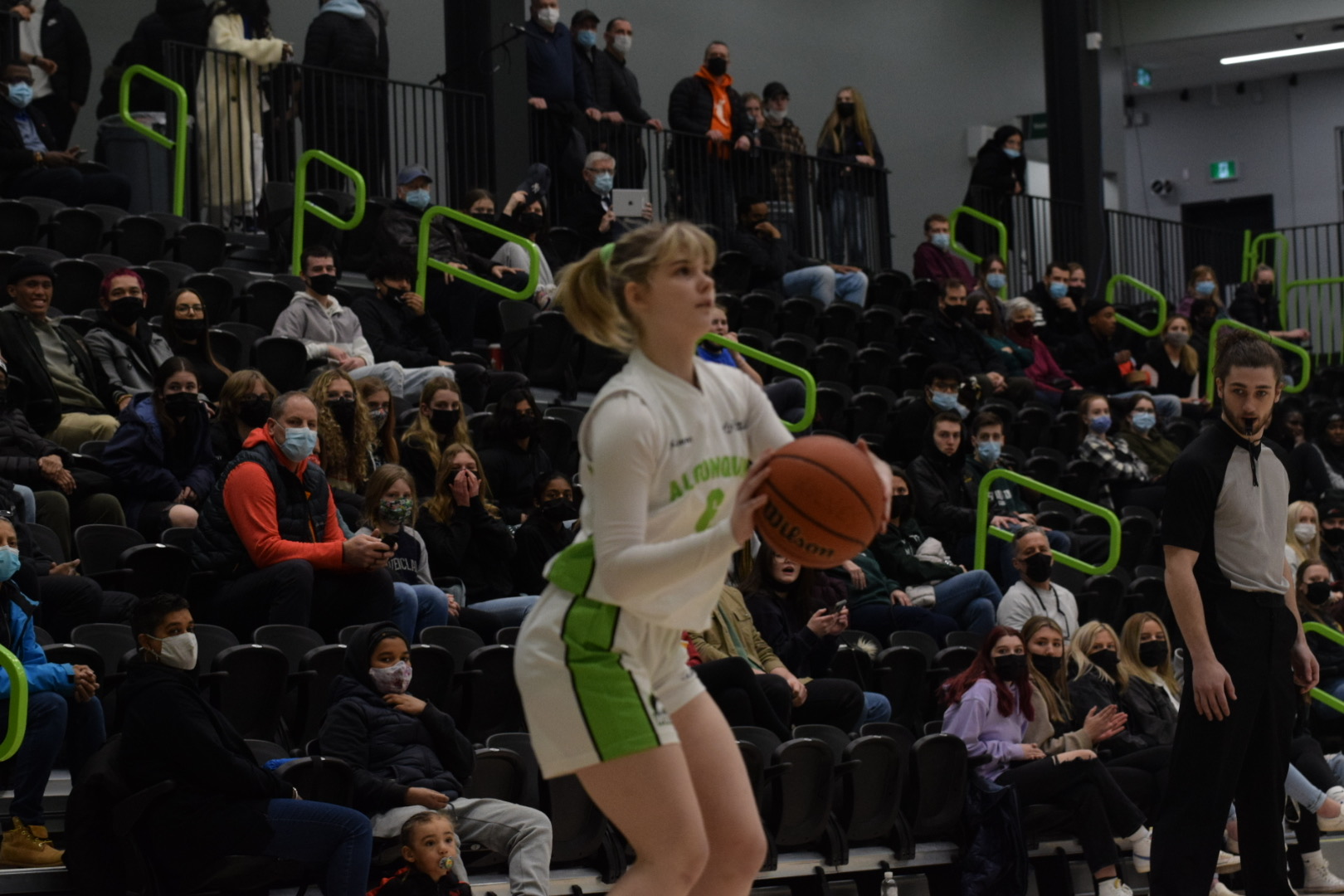 Sydney Moore lines up the three-point shot as fans watch from the stands. Friday’s game was the first time the team has played with fans in the stands at the ARC.

The Algonquin Wolves women’s basketball team has wrapped up their short eight-game season with two close wins against a tough Centennial Colts team this weekend, finishing 7-1 and second in the East Division standings.

On Friday, March 4, the Wolves were down 13 points going into the half but came back from the large deficit and won 55-53. The Wolves struggled to make some open looks, but with tough and gritty defense, crashing the offensive glass and hustling for the ball, the team was able to squeeze out the win.

“Huge character game for us today,” said Jaime McLean, the head coach. “Our girls got a little shell shocked in that first-half and then really showed the amount of effort and character and resiliency it takes to win in this league. For them to come back and fight and chip away point by point, stop by stop, the girls showed real amazing character and supporting each other. It was phenomenal.”

The team’s success this season is no mistake, it is a result of hours of hard-work in the gym. Friday’s game was indicative of the Wolves’ character.

“It shows the hustle and we have been practising so hard this year, four nights a week,” said Madison Robert, who had 10 points in the game. “It just really shows the hours we have put into getting where we are.”

The Wolves held the OCAA’s leading scorer, Abigail Baptiste-Phillip, to her lowest-scoring game at 17 points.

Friday’s game also marked the first time the team has played with fans in stands at the Jack Doyle Athletics and Recreation Centre.

“It felt like home,” said McLean. “This place has just felt like a cave for the last few months, now it felt like home. We had fans, we had energy, the place got behind us in the second-half and off we went.”

Instead of being filled with squeaks of shoes, the bounce of the ball and the yells of coaches, the gym was filled with cheers of the Algonquin faithful.

“It felt amazing, I have not felt that alive in so long, it just really fires us up and it is really awesome,” said Robert.

The presence of the home crowd was well felt in the final stretch of the game. “It gave some positive energy and gave the girls the feeling of ‘let’s go’ because they had everyone behind them,” said McLean.

In their final game of the regular season on Saturday, March 5, the game came down to the final possessions again, but the Wolves pulled away with another two-point win against the Colts, 56-54. The game was even throughout and neither team pulled away with a sizable lead.

McLean was pleased with the maturity of his team to take advantage of the right matchups at the end of the game and slowing things down to use the clock to their advantage.

Although getting the win, McLean feels the Wolves could have had better shots on offense. “We were not getting the easy layups that we want to get, we were getting little jumpers that work for us or wide-open threes but usually when we are running through our offense we want to try and get that easy layup,” he said.

McLean attributes to the team’s defensive success. “Just being disciplined and knowing your matchups,” he said. Making sure key players are not doing what they want to be doing, so we can move teams out of their offensive strategy.”

After several delays to the season due to COVID-19 guidelines, the Wolves had to prepare for the short season with a quick turnaround.

Although there have been obstacles, the Wolves have made the best of their season.

“Overall these girls have come together, they have worked really hard, were showing great potential, so I can not complain. It has been a lot of fun to be back in the gym and coaching again,” said McLean.

The Wolves’ win on Saturday extended their winning streak to six, going into the playoffs.

The team will host their first playoff game of the season on Wednesday, March 9 at 6 p.m. against the Loyalist Lancers.