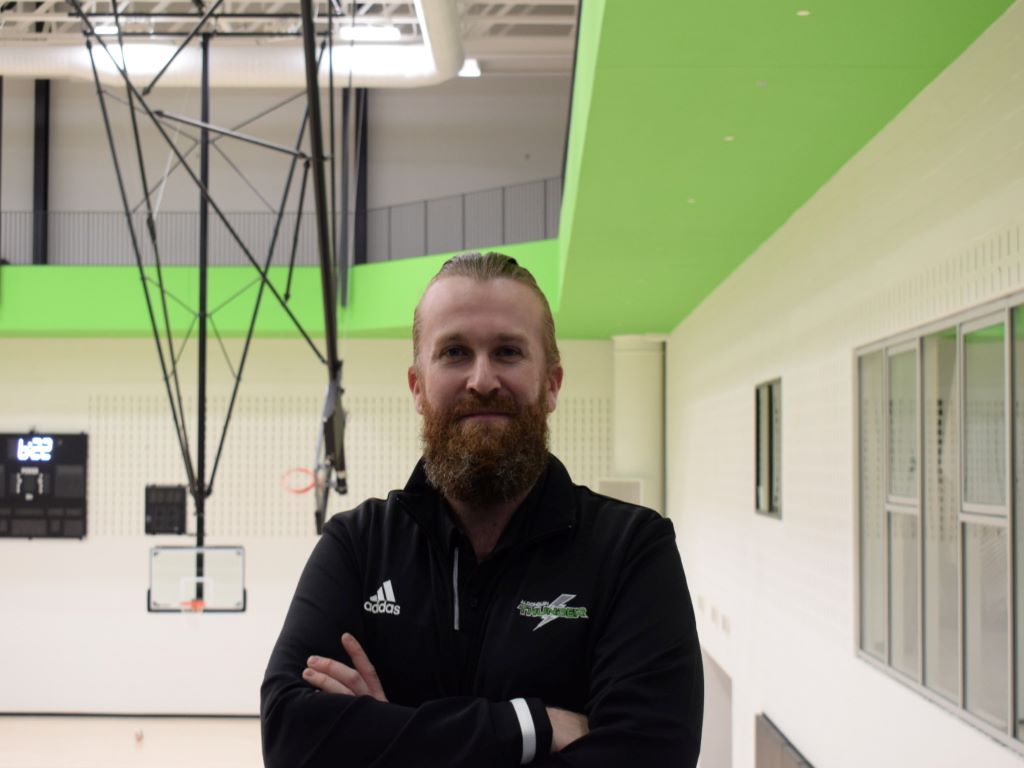 “I couldn’t be happier about being back in the gym,” said Jaime McLean, the head coach of the women’s basketball team at Algonquin College. Photo credit: Liam Fox

The Ontario Colleges Athletic Association announced in a statement varsity basketball and volleyball will be returning to competitive play on Wednesday, Feb. 9.

Now, the team is preparing to play for the first time in almost two years.

The Algonquin Wolves women’s basketball team will open their return to competitive play on Friday, Feb. 11, against Durham College in Oshawa. The team’s first home game on their new court at the ARC will be on Friday, Feb. 18, against Loyalist College.

The season will have eight regular-season games, followed by playoffs.

The Wolves began practising for a return to competitive play in October 2021 but got shut down from playing when the Ontario government announced new COVID-19 restrictions on Jan. 2, including a ban on indoor sports. The team’s first game was originally scheduled for Jan. 11.

“I couldn’t be happier about being back in the gym,” said Jaime McLean, the head coach of the women’s basketball team at Algonquin College.

McLean has been coaching the team since the 2017-18 season.

“Finally stepping back onto the floor, I had those going into a championship game nerves,” said McLean.

“Returning to competitive play is something that I thought would never come back to us,” said Jade Lyons, a forward on the team.

“Being able to return to play is something that I have waited for since the day that it was taken away from me,” said Lyons. “Being within the sports environment again is so stress relieving and is a really huge part of my life.”

“I can’t even describe how excited I am to begin playing again,” said guard Sydney Moore. “It was the one thing I felt I missed most with COVID, just being able to compete.”

This is Moore’s first season playing with the Algonquin Wolves and her second playing OCAA basketball. Moore last played with St. Lawrence College during her freshman year in 2019-20, a season in which she won rookie of the year.

The pandemic has been tough for athletes and coaches alike.

“COVID really messed up a lot of plans and the lockdowns almost felt endless,” said Lyons.

“During COVID everybody has had those highs and lows,” said McLean. “But then, being in touch with our athletes and keeping in the loop on how they’re doing and stuff, sort of kept that coaching flame going.”

The Algonquin Wolves have an optimistic view on expectations for their upcoming season.

“I think we can have a winning record but it’s about being competitive in every game,” said McLean.

Players and coaches have a positive attitude towards their season partly because of the work ethic of the team.

“I think we have a strong group of girls who are willing to put in the time and effort required to win,” said Moore.

“I would say that my expectations for this season would be to win most of our games, persevere through adversity and continue to work harder every day and every game,” said Lyons.

Winning each game will be even more important for the Algonquin Wolves as every game is even more meaningful than before because of the shortened eight-game season.

“Playoffs are going to come much quicker than in previous years and we need to ensure that we take every game seriously,” said Lyons.

A shortened season is not necessarily a negative change for teams returning to play after a pandemic-caused hiatus, said McLean.

For the Algonquin Wolves women’s basketball team, it is a year of many new changes: a new return to play, a new team name switched from the Thunder to the Wolves, new team members and a brand new court.

The new court is one of the main attractions at the new $50 million ARC and has athletes excited to be the first at Algonquin College to call it their home court.

“The ARC building is a phenomenal building that I feel privileged to be able to call home court,” said Lyons. “It is an amazing facility that offers all athletes so many opportunities to get stronger and better.”

The new court at the ARC is larger than the previous court located in the A-building at the Algonquin College campus.

“I’ve got to double how loud I am just to communicate up and down the floor,” said McLean.

Bleachers at the ARC will be empty of fans to begin the season.

“Due to COVID-19 protocols, the OCAA has determined that there are to be no spectators at games until reviewed on February 21,” said Cheryl MacEwen, manager athletic operations – varsity.

Playoffs across all OCAA sports are set to begin on March 9 and will wrap up on March 17 with championship games.