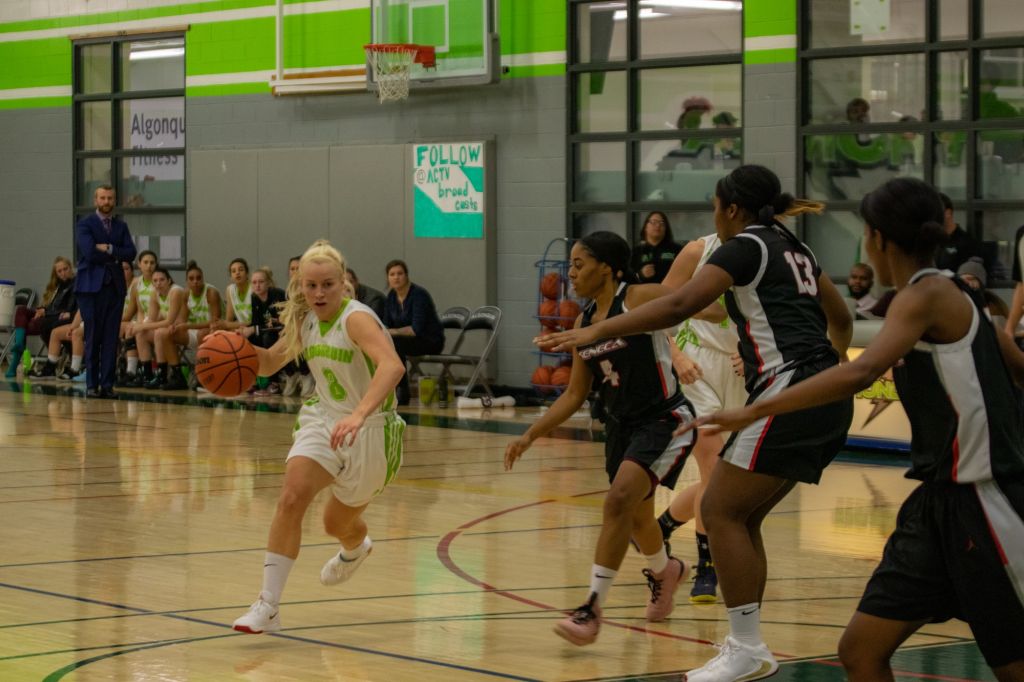 Thunder guard Jody Gerus initiates a play in the offensive zone. Gerus tallied 12 points in the game, good for third in her team.

The Thunder women’s basketball team improved to 7-0 after an 81-62 home win against the Seneca Sting on Friday, Nov. 22.

After a fast start by Seneca to open the first quarter, the Thunder quickly regrouped and played with the lead for most of the night.

It was a sloppy game on both sides of the court, as the two teams had multiple turnovers and defensive breakdowns which resulted in a high-scoring game.

The Thunder’s head coach, Jaime McLean, was happy to come away with the win, but wasn’t impressed with letting up over 60 points to a team that holds a 2-5 losing record like the Seneca Sting.

“I gotta be happy taking away a ‘W,’ going 7-0, definitely not our best defensive performance though,” McLean said. “I think we’ve shown a lot of flaws in the way we’re playing our defence right now so it’s going to be the game plan going into next week – we have to really tighten up what we’re doing.”

Sierra Peck, one of the Thunder’s top scorers, echoed that same sentiment while also adding that playing in the weaker eastern division has its drawbacks.

“We got a win so that’s good, but I think we’ve got a lot of things to work on if we play teams of higher level,” Peck said. “In the east division, we have a very weak group of teams compared to the west, so it’s really hard to keep our tempo high.

“We might be winning, but we’re not doing so well at the base level.”

Even though their play might not indicate the complete dominance their record reflects, McLean said he saw glimpses of the Thunder’s game that they can build upon.

“There were two or three minutes we put together at a time that looked like phenomenal basketball and that’s the way we want to be playing,” McLean said. “Now it’s about stringing together possession after possession…if we can think about that 24 seconds and keep pushing and building off that, then we’ve got a chance.”

Peck is also optimistic about her team and is happy with the group effort they displayed during the game.

“We’re definitely playing as a team, which is nice, can’t complain about that,” Peck said with a chuckle.

The Thunder’s next game will be at home on Saturday, Nov. 30 when they’ll be taking on the George Brown Huskies at 4 p.m.