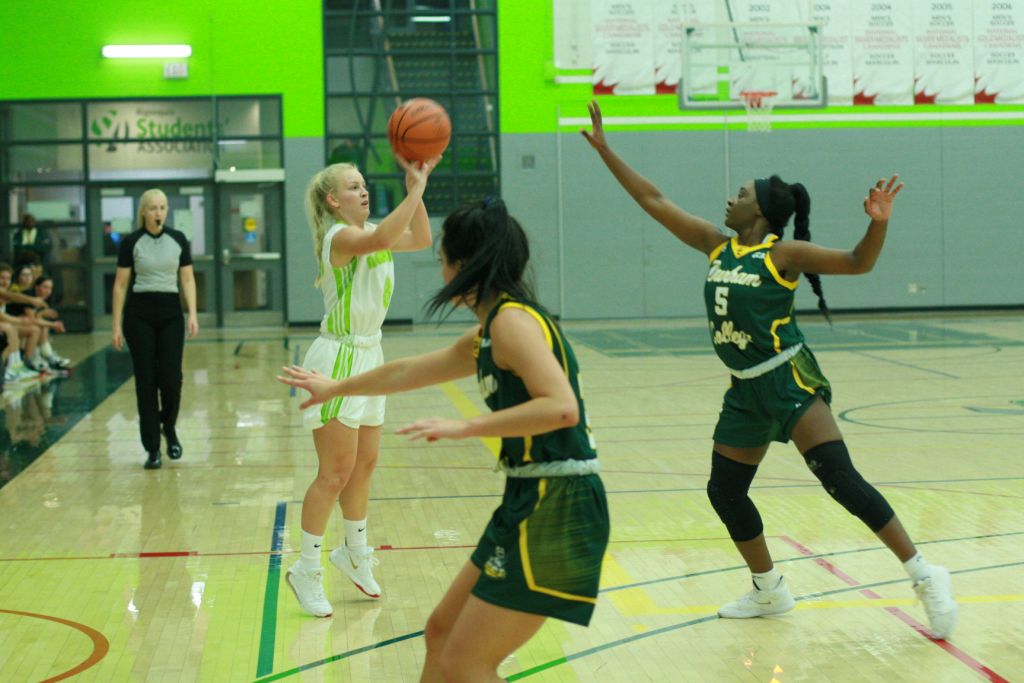 Rookie of the year, Jody Gerus, avoids interception as she passes to a teammate Photo credit: Dana Simpson

The Algonquin College Thunder women’s basketball team kicked off the 2019-2020 season with their home opener on Oct. 25 playing long-term rivals the Durham Lords.

Amid a flurry of chanting and noisemakers from the sidelines, both teams exercised a strong defence and will to win. Ultimately it was last year’s division champions, the Thunder, who stole the game with a 68-60 victory.

Jamie MacLean, women’s Thunder coach, says that the Lords have been very worthy opponents in the past, holding a 4-2 record against the Thunder during his three seasons as coach.

“This year is probably going to be very tight again,” said MacLean in the days leading up to the home opener. “They’ve got a very strong line-up. They’re only returning four players but they’ve also brought in two transfers that are very strong and a bunch of strong rookies.”

But the Lords’ roster is not the only thing to have changed since last year.

While the Thunder roster has also seen some turnaround, it is primarily the team mentality that has evolved coming into this season.

“Accountability this year between the players and the coaches is going to be a big focus,” said MacLean. “When you know you’ve been successful in a practice you can mentally go in confident to a game.”

A tactic proven successful during their first home game of the season as the Thunder moved closer toward their goal of snagging a provincial medal this year.

But the eight point win over the Lords wasn’t a simple accomplishment.

“We battled for a whole 40 minutes against a tough team that had a lot more size than us,” said Thunder guard, Michaela Branker, following the game, “but we were able to use our quickness and endurance to really push the pace and tire them out early in the game.”

It was this up-tempo drive that accounted for both the Thunder’s momentum and the Lords’ streak of fouls as they struggled to keep up in the final quarter.

Following the Thunder’s win Branker went on to state their goals for this season.

“This season we are really pushing to be East champs and hopefully contest for a spot at nationals,” said Branker. “And with the depth and skills of our team, I think these are very attainable goals.”

In the meantime, the Thunder women will continue to take on the season one game at a time.

With the Durham Lords conquered, the Thunder have a new challenge on Nov. 9. They will play the University of Toronto Mississauga (UTM) Eagles for the first time ever.

A challenge their coach is aware of but prepared for.

“You never know what the school mentality or culture is for a team that you’ve never played before,” said MacLean reflecting on the obstacles the Thunder will face when squaring off against a new opponent.

“However, we do have some great tools available to our coaching staff that the OCAA provides,” said MacLean in reference to the video system which allows coaches to watch their opponents’ games for past behaviours and strategy. “That’s going to be our biggest tool to prepare ourselves for a team we’ve never seen before.”

And while it appears the Thunder is off to a great start this season, there is no doubt that it is still anyone’s (or any school’s) game.

At each step of the way they will have their coach’s voice in their ear egging them on. But in preparation for the home opener MacLean only had hope encouragement to share.

“It’s the beginning of the season,” MacLean said. “Everything we’ve put in for practices and pre-season games really comes down to this week and how competitive and how driven we’ll be on the floor. So it’ll be an exciting time.”