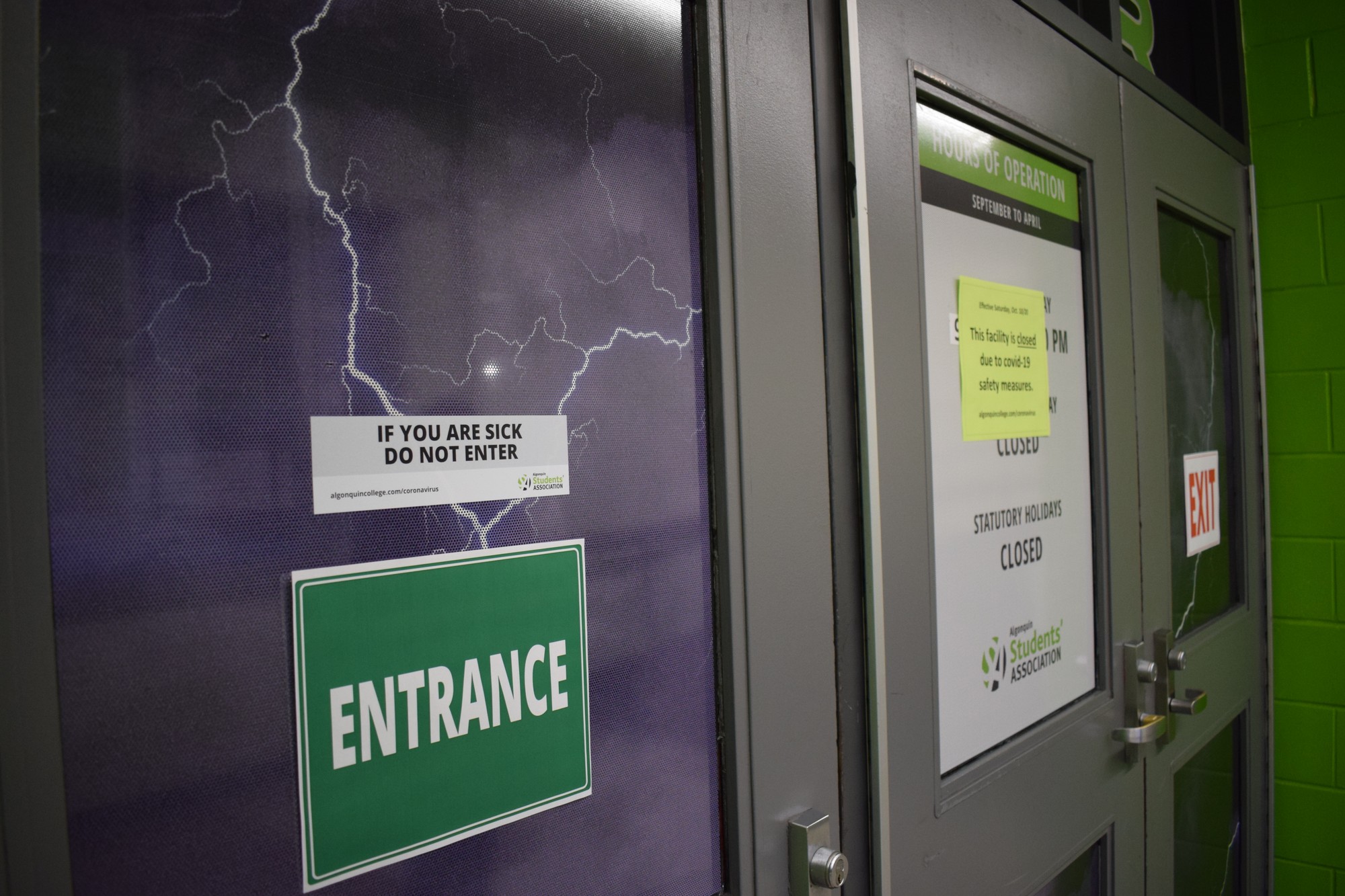 A sign on the door of the Ron Port Athletic Facility explains that nobody should enter the gym if they are feeling ill Photo credit: Kened Sadiku

The OCAA announced on Oct. 15 that varsity sports for the 2020-21 winter season is cancelled as a result of the COVID-19 pandemic.

The Algonquin Thunder already saw themselves out of the picture for the fall varsity sports season, and now it has hit home for the winter months as well.

In a release from OCAA’s website, the decision regarding the cancellations was made based on orders from public health and sanctioned competition not being able to take place because of health and safety concerns.

Everton Senior, head coach of the women’s volleyball team said the news is not something he wanted to hear.

“It is disappointing to hear that the varsity season has been cancelled,” said Senior. “But not surprising given the climate of our society at this current time.”

Whether it’s been getting ready for game-time or anything else, Senior feels bad for athletes that were looking to continue their journey in varsity sports.

Ian Campbell, athletics communication and events coordinator for the Students’ Association’s athletics department says that the cancellation was no surprise to him when he heard about it.

“My initial reaction was really just a confirmation of what I thought was going to happen,” said Campbell. “That’s not from me having any inside info, it’s just having seen the general progression over the last six months.”

With the OCAA competition being held in a lot of the areas surrounding hotspots of COVID-19 case spikes, Campbell says with the way things have been trending in Ottawa right now it was clear this would happen.

“I see the hotspots are Toronto and Ottawa and those are the people that we compete with,” he explained. “You see a storm forming, so I guess it wasn’t a shock.”

Through these times, coaches and other members aren’t the only one feeling the disappointment in the news that came out on Thursday.

“Hearing that the season is cancelled definitely sucks,” said Caswell. “There’s no other words to describe it. The boys were definitely looking forward to getting our second year with our new coach started up. Sure we can hang out individually while respecting social distancing rules and whatnot, but I haven’t seen all of them together since March.”

Much like Senior, Caswell acknowledges that the cancellation will hurt the development for veteran players who won’t be returning next varsity year, and potentially the mojo of things when they all get back on the court.

“We get it, stuff happens and it could be worse but it’s especially tough for the veteran players,” said Caswell. “Which means that next season we will have less veterans and twice the wave of rookies, and that could be a real challenge to overcome and work with.”