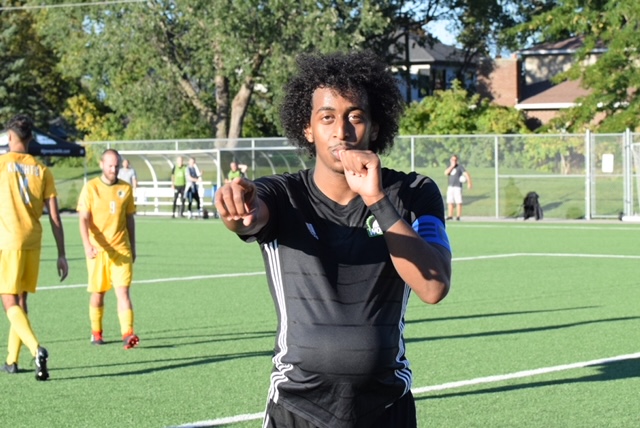 The Algonquin Wolves men’s soccer team improved to five wins and one loss in the season with a 3-0 win against the Fleming Knights on Saturday.

The Wolves came out of the gate strong in the 10th minute with a header off of a corner kick narrowly saved from a jumping grab by Fleming Knights’ goalkeeper Logan Scott, but the team soon opened the scoring seven minutes later with another header off a corner kick by centre-back Alban Meto.

In the 37th minute, the Wolves extended their lead 2-0 courtesy of a shot by striker Latif Shaif that found its way into the corner of the net.

The final goal of the game came from a converted penalty shot by central midfielder Benaiah Tesfaye in the 60th minute.

The Knights came close to gaining momentum on the scoreboard in the 71st minute after a shot hit the crossbar, but the Wolves later continued to dominate possession and secured their fourth shutout of the season.

Despite the win, coach Angus Wong had higher expectations for the game and felt it was a regression in performance from the team’s 5-1 win against the Centennial Colts on Friday night.

“Overall I’m disappointed with the performance. I think we played to the level of our competition and we didn’t play to the standard we are capable of playing to,” said Wong.

“Today I think we played a pretty good game, we got the W, but we always want to improve more, after yesterday’s game our performance dropped slightly,” said striker Ahmed Mohsen, who had a shot from outside the penalty box ring off the crossbar in the first half.

The Wolves had five players ineligible to play in Friday’s match with the Colts due to suspensions.

“It speaks to the quality of the players who played yesterday and their ability to implement a game plan, and to execute on the things we were working on all week,” said Wong about the team’s depth when they were missing key players.

The Wolves have had a successful opening to the 2022 season as they lead the Ontario Colleges Athletic Association East Division with 15 points in the standings. Both the Durham Lords and George Brown Huskies are tied for runner-ups in the division with 10 points respectively.

The Wolves defence has been stellar, allowing two goals through six games, while also averaging 2.17 goals scored per game.

Although the team feels there is lots of room for improvement, ambitions and confidence are high this season.

The Wolves will travel to Toronto next weekend to take on the George Brown Huskies on Friday and the Seneca Sting on Saturday. The team will wrap up the 10-game regular season at home on Oct. 8 against the Sault Cougars and on Oct. 15 against the Durham Lords. OCAA men’s soccer playoffs begin Oct. 26.