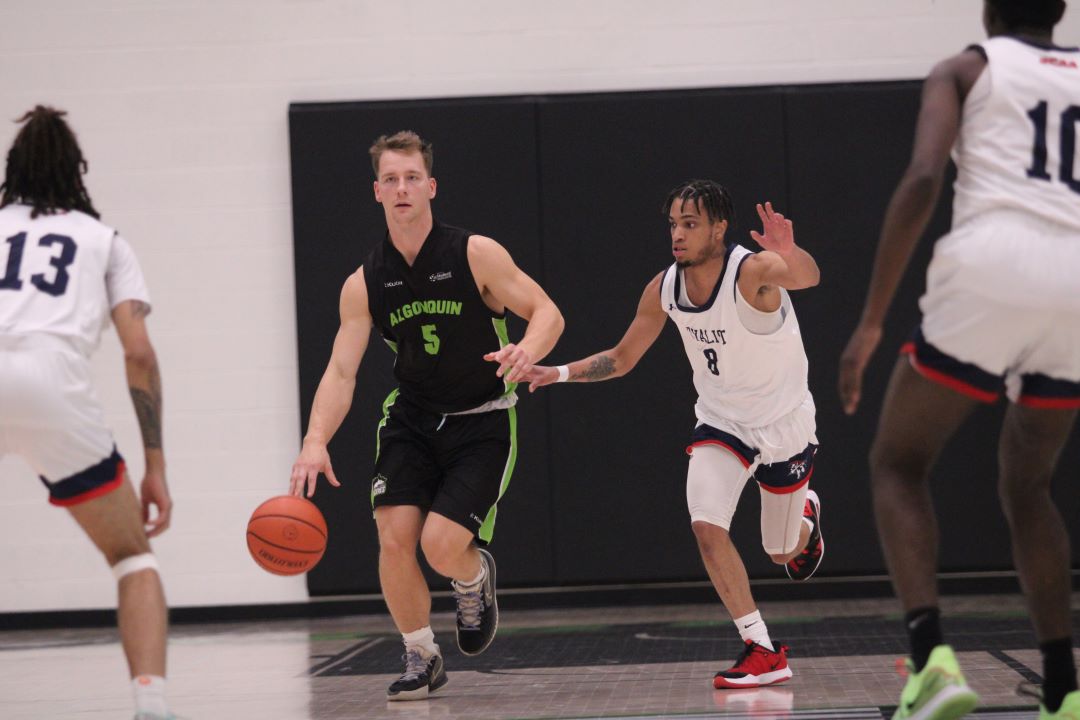 Christopher Lachapelle protects the ball from a Lancers' player in the second half. Photo credit: Kolbe Devaux

The Algonquin Wolves men’s basketball team battled hard against the Loyalist Lancers on Saturday evening but was unable to come away with the victory.

In a game decided by large scoring runs, the Wolves couldn’t overcome the visitors scoring nine consecutive points at the start of the fourth quarter as they suffered a 75 – 71 loss.

Forward Christopher Lachapelle was proud of the effort his teammates displayed despite the result.

“We were able to have a chance at the end and that’s really all we can ask for,” he said. “We just need to execute at the end and limit our obvious mistakes. Turnovers, transition defence. If it had to be done over again obviously we’d give it our all, just like we did.”

“We started well,” he said. “We were making stops on defence and we were executing our offence, that’s about as much as you can ask for. But basketball is a game of ups and downs. We made our run and they made theirs, but we didn’t adjust properly to their run.”

The Wolves scored the first nine points of the game and had a 22-11 lead with 1:38 remaining in the first quarter.

Then the Lancers made their move.

They scored 15 unanswered points, scored 27 in the second quarter alone and led at halftime 41-34, an 18-point swing.

The Wolves made up the seven-point deficit in the third quarter, tying the score up at 54. However, the Lancers pulled away again in the fourth and successfully held off the home team’s furious charge late in the quarter to clinch the four-point victory.

“We didn’t adjust to the pressure they were putting on us on offence and defence,” said Haggar. “In my opinion, they just wanted it more than we did and we didn’t respond to that. I think the timing for when we decided to adjust to the urgency level of the game was a little late. We had the chance to tie it under two minutes but we missed some shots and gave up a crucial rebound.”

Lachapelle summed up how the team was feeling after the loss.

“We feel like this game was really our fault. We gave them that game. We didn’t feel like they really earned it because of how many mistakes we made. So, we’re going to look at ourselves, regroup and we’re going to be ready for next weekend. That team is going to be in for a tough one,” said Lachapelle.

The Wolves next play the Seneca Sting on Nov. 5 at 6 p.m. at the Jack Doyle Athletics and Recreation Centre.