All Thunder and no rain during this storm 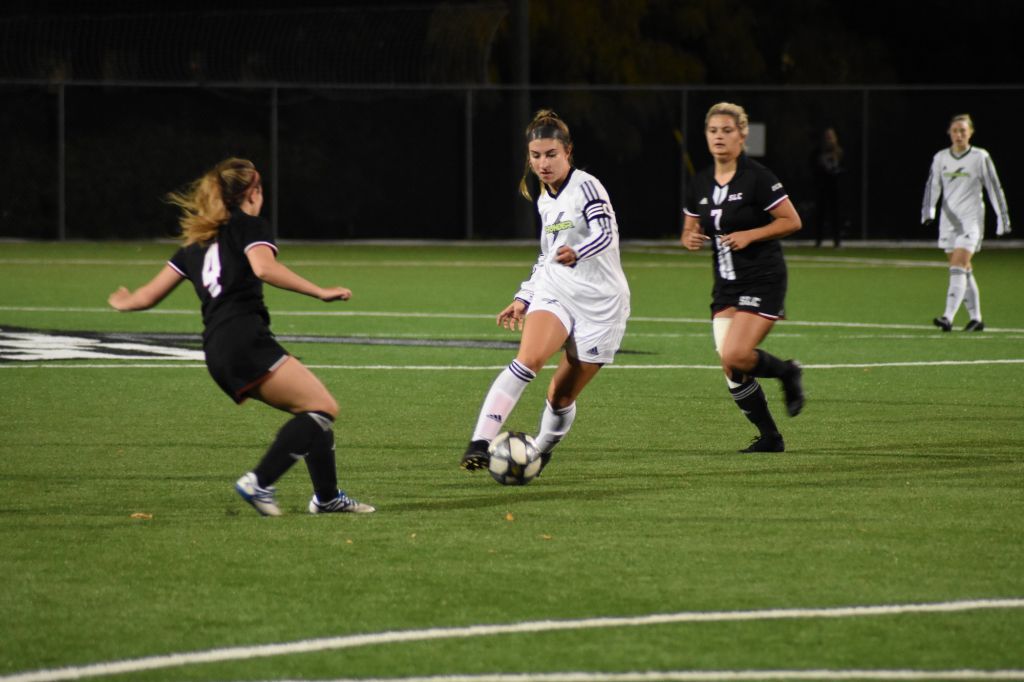 As the sun set over the green grass on the field, the Thunder welcomed the St. Lawrence Vikings to their final home game of the season at the Algonquin sports facility.

Before the game began both teams lined up side by side at centre field. Thunder coach Basil Phillips announced to the crowd that this will be the final official Thunder game for four of his senior players. 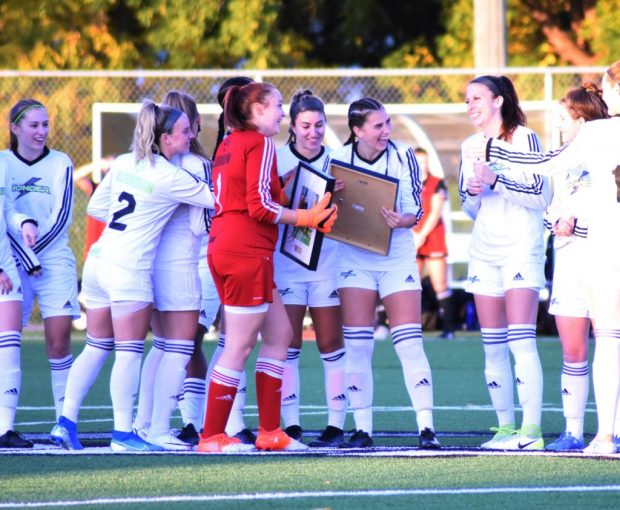 Prior to Friday’s game, the Thunder ranked one above the Vikings in the league’s standings.

In hopes of bringing their own storm to the Thunder’s doorsteps, the Vikings introduced two new midfielders to their team.

But even with the added woman power, the Vikings could barely keep up with the steady pace set by the Thunder early on.

The Vikings did their best to keep up with seven shots on goal in the first half. However, Thunder goalkeeper Mariah Harper remained impeccably sharp; with a total of nine saves at the end of the night.

Nearing the end of the first half, both teams fought hard for possession in the Vikings’ zone. St.Lawrence’s newly added midfielder collided with an Algonquin player and went down around the 43 minute mark. Shortly afterwards she was moved off the field and subbed out.

The moon was on full display over top of the crowd by the time the second half began. The stadium lights lit up the field, and a slight chill marked the change in weather. Some spectators in the crowd pulled out blankets to keep their legs warm.

But despite the chill in the air, it was all fire on the field as Thunder forward Mikaela Gualandris scored the third goal of the night in a minute of play in the second half.

That’s when the Thunder truly brought the storm. Algonquin maintained possession of the ball and successfully scored another three goals throughout, one for each: Georgia Iliopoulos, Sarah Ouellette and Tejumola Abubakar Bakare.

After coming out strong near the end of the second half Thunder midfielder, Philo Sully-Bitsi was happy with her performance.

“For the time that I was on, I feel like I did really well,” said Sully-Bitsi. “I slide tackled a lot although they weren’t called.”

With 30 shots on goal overall, compared to the Vikings’ 14, the Thunder proved they deserve their place in the ranks.

“We started the game a little bit slow, but then picked it up, and we essentially played really well,” said coach Phillips.

Thunder defender Georgia Iliopoulos felt she played well, but was more proud of her team’s overall performance in their last home game.

“I had faith in us, we’ve played them before and I know what our team can do when we all show up and we all showed up,” said Iliopoulos.

Once the team is back from the Thanksgiving long weekend, they begin preparing for playoffs. Coach Phillips advised that his team refocus and get ready to play any one at any time.

“It’s playoffs now so you’re getting into do or die which is always tricky with any opponent. Now it’s just a matter of, we need to focus, we have a long weekend; come back refocus and get ready to play whoever it is were going to play.”