You are here: Home / Opinions / Taking the safety off for your safety 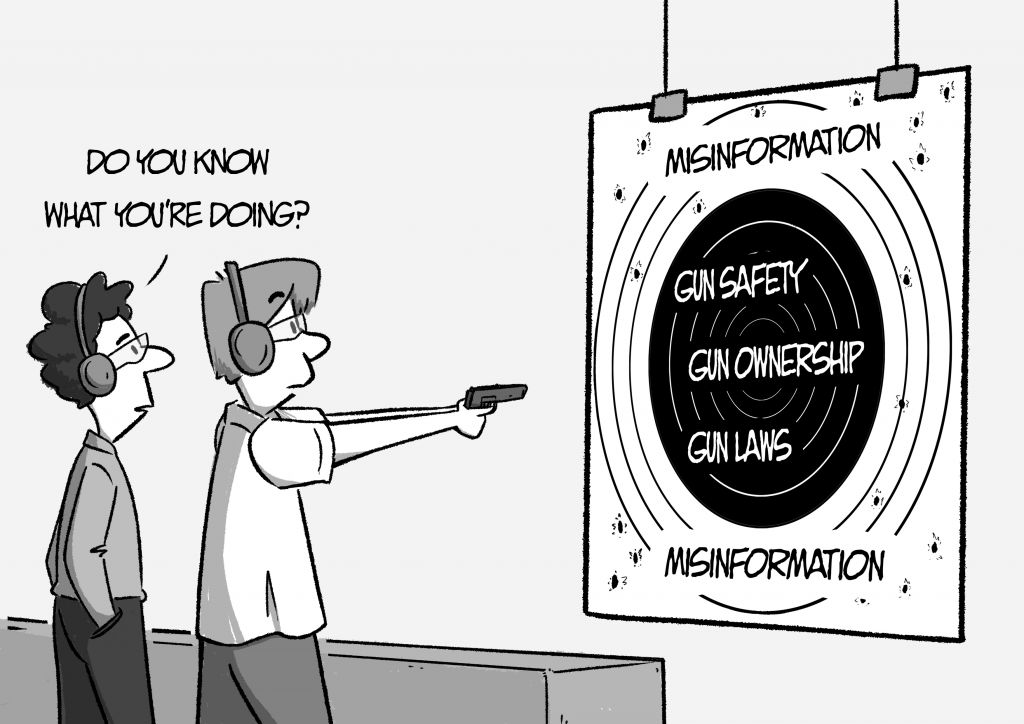 When you hear the words gun and safety in the same sentence, what do you think? Maybe a bit of panic? Fair enough. But, it doesn’t have to be that way.

The Algonquin Firearms Club, a new unofficial club, has been looking to become official after a similar club at Carleton recently got the ok.

As of right now, the club isn’t allowed to organize visits to firing ranges in an official manner, however, the founders are looking to change that soon.

Now, is that such a problem? Is teaching students how to properly function a loaded weapon safely, in the right environment, an issue?

Possessing a gun is hard enough in Canada. All gun owners have to be licensed and all handguns and most semi-automatic weapons have to be registered. All guns cannot be carried outside a home, either concealed or open, and licensed guns are rarely given out to those who do not need it for their job.

This begs the question; what’s the big deal?

Teaching students safety protocols on guns doesn’t seem so bad, does it?

If people are going to use guns, why not educate them before they lay their fingers on one. You wouldn’t hire a waiter or waitress if they feel socially awkward and can’t speak to people and refuse to do so. It just wouldn’t make any sense.

Imagine a scenario in which we let those who just turned 16 to take their parent’s keys and drive out onto the open road, alone, with no prior training on how to drive. The roads would resemble a tornado ripping through the streets. Insane, right?

Education is a privilege and we should use that privilege to the highest potential. Guns should be treated with full caution, this goes without saying. But why not use the education that we already have and apply it to those who wish to use guns safely in the future?

Guns will always, always be a part of our lives, whether we like it or not. In fact, the Gun Blog [in reference to the gun blog (https://thegunblog.ca/facts-stats/)] – a blog that keeps statistics surrounding gun possession in Canada – 2.2 million Canadian men and women have a federal gun license. There are 20 to 30 million guns owned by Canadian hunters, farmers, recreational shooters and more across the country.

So why not have a club on campus where members can discuss this and more? Why not educate the men and women who are going to use these weapons in the future for whatever legal – and we stress legal – purpose.

The fact of the matter is: if men and women choose to possess and use firearms in Canada, they should be familiar with the theory and application of firearm use.

Even if you are not going to use a gun, you should know what it is and respect what a weapon of this magnitude can do in all situations.

The more knowledge we have, the more aware we are as Canadians on guns and gun safety. As Sir Francis Bacon said, “Knowledge is Power.”

Not everyone is going to possess and use a gun in their lifetime. But for those who do and will, why not educate them on guns and teach them the importance of safely using them.

Or we can just give them the keys and see what happens.

Taking the safety off for your safety Reviewed by Bradley Legault on October 10, 2019 .

Safety. It’s a word that rings differently for different people across the country. Guns. That’s also a word that means different things to different people depending on your perspective. When you hear the words gun and safety in the same sentence, what do you think? Maybe a bit of panic? Fair enough. But, it doesn’t […]

Safety. It’s a word that rings differently for different people across the country. Guns. That’s also a word that means different things to different people depending on your perspective. When you hear the words gun and safety in the same sentence, what do you think? Maybe a bit of panic? Fair enough. But, it doesn’t […]