What happened to the Bio Wall in the ACCE building? 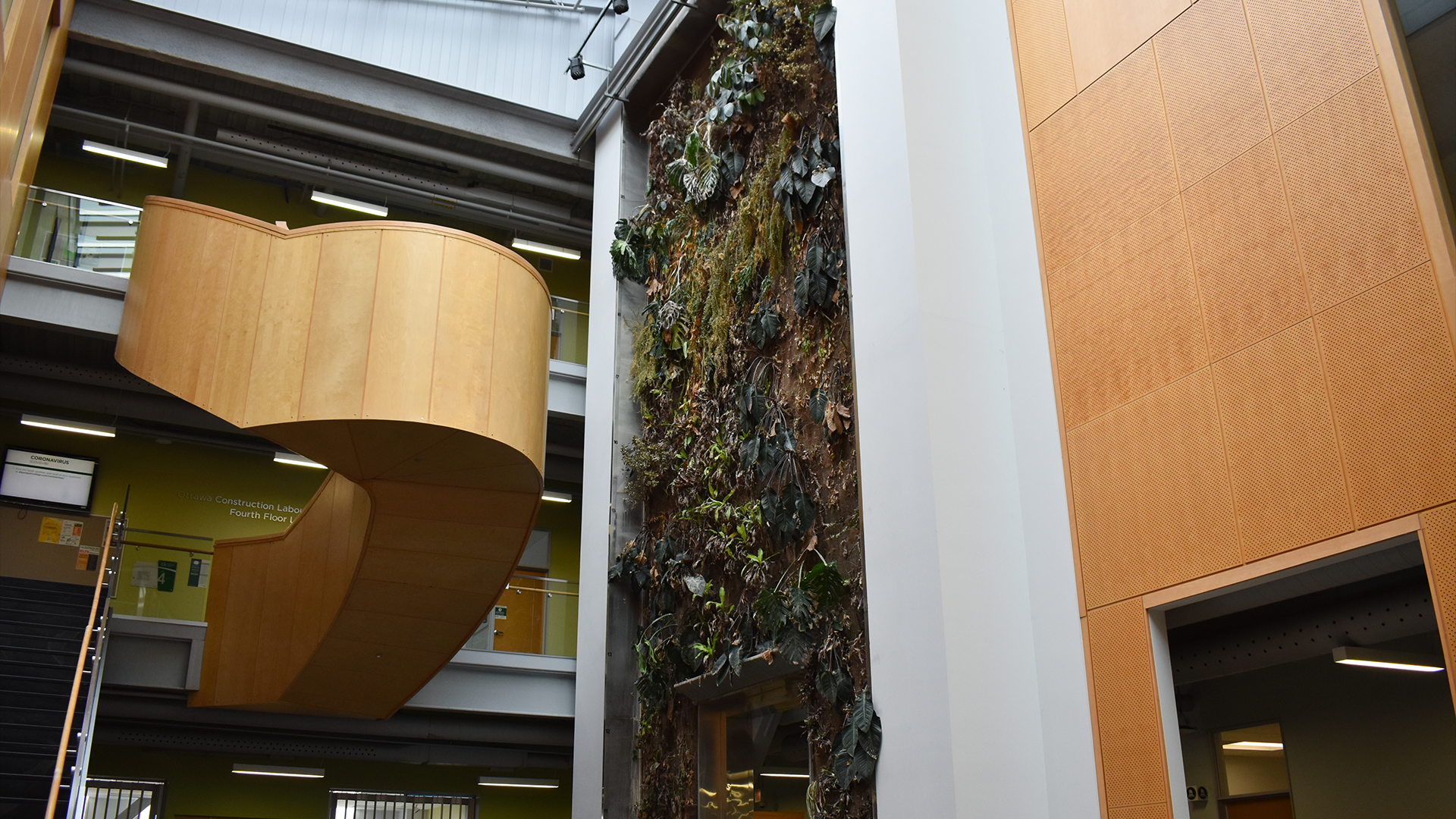 The Bio Wall - known also as the living wall - is one of Algonquin College's most unique displays. It will now have to be restored and may take many months of hard work. Photo credit: Julien Bernier

Students have been back on campus for nearly an entire semester, and many have noticed the state of one of Algonquin College Woodroffe campus’s most unique walls – the Bio Wall.

The Bio Wall – or living wall – is looking a lot less green than it was prior to the COVID-19 pandemic.

Students that have passed by this wall and wondered why this was the case were given an answer in the form of signage.

This sign stated: ” The aerial lift used to maintain the living wall has been inoperable due to the travel restrictions imposed on the maintenance personnel as a result of the COVID-19 Pandemic. This is was to the dismay of our horticulturalists, the plants on the wall are dead and dying. They have not been able to receive the level of care necessary for them to thrive or survive.”

This was not the only reason the living wall is dead.

Ryan Southwood, the executive director of facilities management at Algonquin College, explained that the aerial lift also needed maintenance but finding a technician to maintain it was difficult.

“We searched all through Canada for a technician that was qualified to deal with that [maintenance] and meet the safety requirements,” he said. ” But there was nobody available in Canada, the only place you could get it serviced was from technicians in the U.S.”

Southwood said that flying a technician over from the United States and having them quarantined for two weeks was not viable and so the company they contacted did not want to do that.

The decision was made to ship the lift to the United States to be serviced by the company they had contacted prior.

Importing and exporting equipment is not something the college does much of according to Southwood.

“Figuring out that process took – honestly, quite a few months,” he said. ” We finally found an exporter willing to work with us, but the paperwork was quite exhaustive and was another time sink.”

The aerial lift returned on Oct. 1, 2021, after maintenance was completed. A timeline for assessment was not given by Southwood who said the work would begin in a few weeks.

The living wall is in such a bad state that there may be a need to contract out the work to determine if the living matter on the wall is still viable or not.

Another reason the living wall is in the state it is in is due to the irrigation system not working due to blockages in it. This system is usually serviced by the facilities operations and engineering team. Due to the lift being inoperable they were not able to tend to the maintenance of the irrigation system.

The horticulturalists are in charge of maintaining the plants on this wall and as a result of the lift being out of commission, they were unable to tend to the living wall.

Rachel Rhoades, one of the horticulturalists at Algonquin College, said that the plants on the living wall are standard tropical plants that can be found in any home or retail store.

“They [the plants] require monthly or bi-monthly cleaning of the leaves to remove dust and insects,” she said in an email. ” Beneficial insects are released monthly in order to control the population of pest insects.”

Rhoades said the insect released is known in its common name as the mealybug ladybird is used to control the mealybug, which is the biggest pest second to the two-spotted spider mites.

The plants on the living wall are grown in water supplied by nutrients instead of being grown in soil.

“The water reserved is changed every three weeks and fertilizer added, “Rhoades said in an email. “The filters for the reverse osmosis system which delivers the water to the reservoir are changed roughly every six months.”

Rhoades does not think any of the plants on the wall will be salvageable as the water for the system has been off for months.

Work on restoring the living wall is set to begin in December.

“We have engaged a contractor to prune and clean up the wall in December,” Southwood wrote in an email. “And then replant in January if the growing medium is still in good condition.”