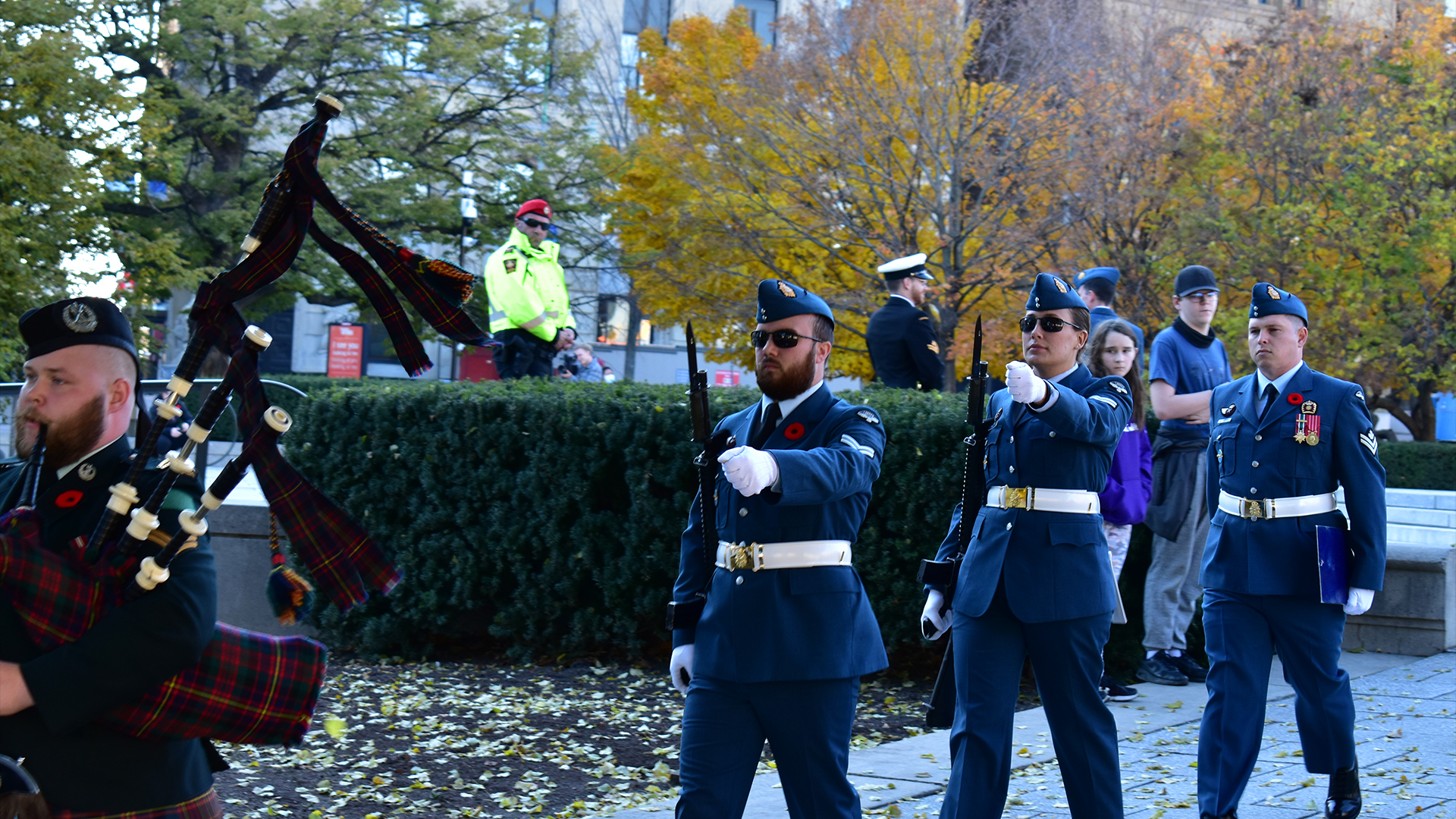 Remembrance Day gives people a chance to reflect and appreciate the freedoms they enjoy today due to the sacrifice of the men and women in all branches of the military - past or present. Photo credit: Julien Bernier

Remembrance Day on Nov. 11 has a special place in many individuals’ hearts.

It is a day of reflection and gratitude for Canadians across the country, some who have family currently enrolled in the military and many who have had loved ones serve for Canada in the past.

For Gillian Smith, a respiratory therapy student at Algonquin College, Remembrance Day is a time for her to reflect and remember her two grandfathers that were both in the military.

“For sure, yeah, you think about them on the day,” Smith said.

Smith has typically gone to the Remembrance Day ceremony held downtown before the National War Memorial at the Tomb of the Unknown Soldier – located at 53 Elgin St in Ottawa. Unfortunately, she will not be able to attend the ceremony this year because of school.

Jameson Thompson, a second-year respiratory therapy student who lives in Smiths Falls – part of the Ottawa valley region, said that he usually goes to the ceremony held at the cenotaph there.

“We have a cenotaph where members of the community gather,” he said. ” We have a moment of silence and have readings from past military personnel and people who knew people [in the military]. So, it’s just a time to really understand how things were.”

For students or staff that may be unfamiliar or curious as to why we wear poppies or go to these ceremonies, Thompson said that it’s a time for people to respect those who have done so much in defense of our country.

“I think it’s just at time to reflect and to appreciate what we have today,” he said. “And realize that there are so many people that worked hard and lost their lives for the opportunity that we get and that we sometimes take for granted.”

Smith finds it touching that some of the people we honour and remember on Remembrance Day were the age of some of the students and some may have been even younger and yet still fought and paid the ultimate sacrifice.

“I think it’s just nice to remember that some of those people were our age,” she said. “We’re very grateful that we live in this time where it doesn’t happen anymore[world wars]. It’s nice to remember and learn from the past and just give respect to what everyone went through.”

As many students will be unable to attend a ceremony this year due to their schedules, there are still ways that one can observe a moment of silence.

“I think probably just put on the news at eleven o’clock[a.m], and then watch that[the ceremony downtown],” Smith said.

While it is possible to watch the ceremony broadcast on various news outlets, many students will not have that time.

Thompson, who is unsure if he will be able to attend the ceremony in Smiths Falls, will observe a moment of silence by himself.

“Yeah, just taking a moment for yourself, to reflect or even just educate yourself, whether it be a minute or ten minutes,” he said. “However long you need, it’s important.”

Students interested in participating in Algonquin College’s ceremony can find all the relevant information for their respective campuses on the myAC website.